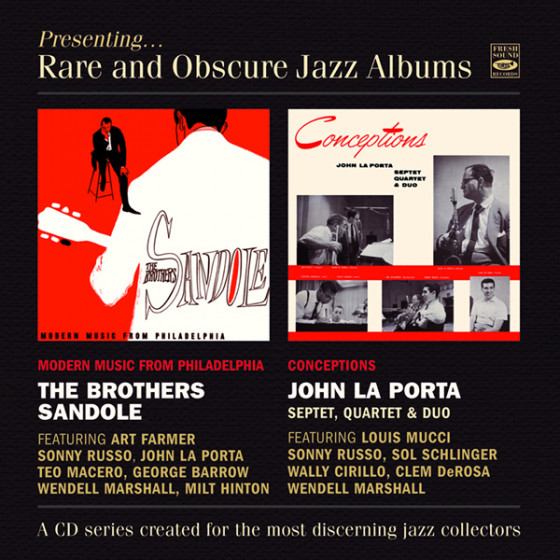 Modern Music from Philadelphia
Operating solely on an artistic basis, The Brothers Sandole band was not a commercial venture, but a band decidedly different, daring and experimental. Dennis and Adolph Sandole were music teachers in Philadelphia, who actually wanted to keep teaching but felt that their music was completely original, and so harmonically different in scope that it deserved to be heard on its own merits. The dense, full character of its original figures gave the unit a distinct big band sound, and all the improvisation fits into a well-written pattern. Four of the ten scores presented here are by Dennis, two of them so concise they are over in amatter of seconds; the rest are by Adolph. All compositions by the Sandole brothers are actually cleverly planned pictures, and flawlessly performed. You'll find the entire album to be a rewarding experience, but unfortunately, it was the only one they recorded. A must-have for any jazz collector.

Conceptions
John La Porta was a most skilled musician and teacher. He was always looking for new forms of expression, and maybe that is why he was often misunderstood. His distinctive approach to jazz was never casual, and his album Conceptions might be the most pristine reflection of his ideas. His objective was to obtain the widest possible variety of colors, dynamics and moods by using various combinations of instruments. All the writing here is by La Porta except for Juan Tizol's Perdido. The Septet compositions offer awider set of colors to work with and a wider ensemble sound, setting a good line and a developing, satisfying structure. The Quartet sides provide for a more virtuoso type of playing and rhythmic experimentation, difficult to handle in a larger group. The Duets are five very short dialogues between La Porta, alto sax, and Louis Mucci, trumpet, and provide humorous divertissements between the longer compositions. Throughout these performances, La Porta plays alto sax and clarinet with strength, beauty and consistency, Mucci is shown as a careful trumpeter with a beautiful tone and lyrical feeling, while the underrated pianist Wally Cirillo also has several fine passages.

"One of the more unique sounding musicians in jazz was John La Porta (1920-2004). Originally a clarinetist (and friend of Buddy DeFranco), he studied with Lennie Tristano and created a signature sound on the alto sax, a foundation of Charlie Parker, but with a strong mix of classical-cum Jackie McLean. These two albums spotlight the fingerprint signature of a jazz artist in some rich and creative settings.

La Porta has another session from 1956 that makes up half of the Presenting…disc. La Porta plays both clarinet and alto sax, going from septet to quartet all the way to duo with Louis Mucci/tp, Sonny Russo/tb, SolSchlinger/bs, Wally Cirillo/p, Clem DeRosa/dr and Wendell Marshall/b. La Porta is featured on the licorice stick on a richly textured septet piece “Concertina For Clarinet” while “Nightly Vigil”, “Little Fantasty” and “Triplets, You Say?” feature delicate conversations between La Porta and Mucci. The quartet swings well on the stretched out “Perdido” while the septet is relaxed for “Small Blue” Opus”. Creative and clever.

La Porta is a sideman altoist along with boppers Art Farmer/tp, Sonny Russo/tb, Adolph sandole-George Barrow/bs, Al Del Governatore/p, Dennis sandole/g, Wendell Marshall-Milt Hiinton/b, Clem DeRosa/dr and a rare cameo by famed producer Teo Macero on a 1955 session. Farmer glistens on the upbeat and optimistic “Istanbul” and “Carpet”  with Barrow (best known for his work with Oliver Nelson) as rich as molasses on “Drums and Carpet”. Macero is a ringer on “Arabu” while La Porta stands out on “Wings” and “Pieces of Eight”.

The liner notes for this disc give some light to La Porta’s brief modern jazz career, making this pair of albums a great “what if”. Had he kept on this path, where would he, and jazz, have gone? Fascinating rhythms."

'Most Adventurous Reissue of 2021'

"[...] Adolph and Dennis Sandole. Music teachers in Philadelphia, who decided in 1955 to record a jazz record, but without a commercial purpose, purely with the music that they thought was relevant and cool at the time. And that became something in between jazz (Gillespie, Parker, Mingus), impressionistic sound fields and contemporary chamber music.How they got the label Fantasy so crazy, I have no idea, maybe they bought a hundred copies themselves.

Judging by titles like 'Wings Over Persia', 'The Boys From Istambul', 'Arabu' and 'Magic Carpet' you could conclude that the brothers or their ancestors originally came from the Middle East, or had an affinity with it... But the family name was originally Sandoli. Obviously Italian.

Guitarist Dennis Sandole has made it to the bio/discographies as a rhythm guitarist with the big bands of Ray McKinley, Tommy Dorsey, Boyd Raeburn, Gene Krupa and Charlie Barnet. Not the least. But his importance to the jazz community was primarily his teaching. He was the teacher of many Philly jazz musicians, from James Moody to Matthew Shipp. And from 1946 to the early 1950s, saxophonist John Coltrane was Sandole's most promising student...

The emphasis here is more on colors than rhythms. Some titles ('Perhaps, One Touch Of...') give you the sensation of being on a suspension bridge undulating in a hurricane, other songs ('Magic Carpet') sound like etudes for advanced students. The rug in question is wall-to-wall and long pile and available in muted colours.

Trait d'union from this album is reed player John La Porta, who can be heard on all 21 tracks. Its palette is even bigger than that of the Sandoles. From fairly straight-ahead jazz to the more contemporary idiom of Luigi Nono cum suis. The duets with trumpeter Lou Mucci are intriguing. Sometimes these are studies in counterpoint. Is it all written out or improvised on the spot? La Porta has stretched a camouflage net over 'Perdido' (the only standard on this album). So that even composer Juan Tizol would have to scratch his head. Only around 7'00” do you start to suspect something – and then 33 seconds of doubt remain.

If there are any discs out there that want to compete for the title of 'Most Adventurous Reissue of 2021', they have to act fast."

"In a perfect world, John La Porta would be much better known. But regrettably, many jazz enthusiasts are unaware of his work. After the '50s, he did little recording, and over the years much of his catalog has been out of print. On his album 'Conceptions,' La Porta has a variety of talented musicians to choose from -- the participants include trumpeter Louis Mucci, trombonist Sonny Russo, pianist Wally Cirillo, bassist Wendell Marshall, drummer Clem DeRosa, and two baritone saxophonists: George Barrow and Sol Schlinger. La Porta (who is heard on alto sax and clarinet) keeps things interesting by using different combinations of players on different songs; the listener doesn't know from one selection to the next whether La Porta is going to lead a septet, quartet, or duo. But whoever La Porta is featuring, the performances are relevant to the third stream movement as well as cool jazz (which was basically a laid-back approach to bebop). Third stream enthusiasts will respect La Porta's classical-influenced arrangements, and cool jazz aficionados will appreciate his tasteful use of subtlety, restraint, and understatement. These performances are swinging, but not in an aggressive, forceful way -- in the '50s, La Porta demonstrated that an improviser didn't have to play hard bop in order to swing. For those who have never experienced the pleasures of La Porta's playing and arranging, 'Conceptions' would be an excellent starting point."