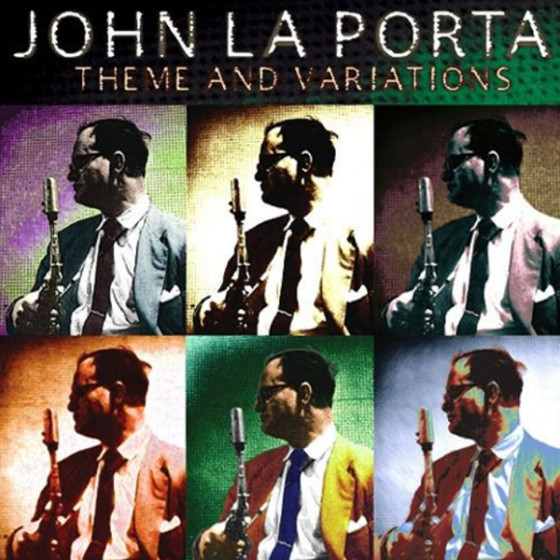 Though relatively little known except among modern jazz cognoscenti and in jazz education circles (he was for 38 years on the Berklee College of Music’s faculty), reedman/composer/arranger John La Porta boasts a most impressive–indeed, fascinating–résumé. Coming up during the big band era (most notably with Woody Herman’s First Herd), La Porta was from the mid-1940s to the mid-’50s a major participant in the bebop, cool, and Third Stream movements. How many jazz players, after all, can claim to have been on a record-date front line with Charlie Parker and Dizzy Gillespie, worked extensively with Lennie Tristano and Charles Mingus, and have been a featured soloist in a piece composed by Igor Stravinsky (1946’s Ebony Concerto, for the Herman Orchestra)? Theme and Variations and Conceptions, the two LPs paired herein, were recorded for Fantasy between 1956 and 1958. The music, all of it with the exception of Juan Tizol’s jam session perennial "Perdido" written by La Porta, melds his compositional interests in contemporary classical music, new views of the older fugal and canonical forms, and the rhythmically vital bebop idiom. These challenging, lovely, and surprise-filled pieces for ensembles ranging in size from duos to octets feature La Porta’s alto saxophone and especially masterful clarinet, as well as a complement of superb, if highly underrated, players, including trumpeter Louis Mucci, baritone saxist George Barrow, and pianist Wally Cirillo.

"In a perfect world, John La Porta would be much better known. But regrettably, many jazz enthusiasts are unaware of his work. After the '50s, he did little recording, and over the years much of his catalog has been out of print. But in 2002, Fantasy provided a 79-minute La Porta CD titled Themes and Variations, which offers the contents of his 1956 LP, Conceptions, as well as 14 previously unreleased recordings from late 1957 and early 1958. On these selections (a total of 25), La Porta has a variety of talented musicians to choose from -- the participants include trumpeter Louis Mucci, trombonist Sonny Russo, tenor saxophonist Larry Wilcox, pianist Wally Cirillo, bassist Wendell Marshall, drummer Clem DeRosa, and two baritone saxophonists: George Barrow and Sol Schlinger. La Porta (who is heard on alto sax and clarinet) keeps things interesting by using different combinations of players on different songs; the listener doesn't know from one selection to the next whether La Porta is going to lead a sextet, septet, quartet, or something else. But whoever La Porta is featuring, the performances are relevant to the third stream movement as well as cool jazz (which was basically a laid-back approach to bebop). Third stream enthusiasts will respect La Porta's classical-influenced arrangements, and cool jazz aficionados will appreciate his tasteful use of subtlety, restraint, and understatement. These performances are swinging, but not in an aggressive, forceful way -- in the '50s, La Porta demonstrated that an improviser didn't have to play hard bop in order to swing. For those who have never experienced the pleasures of La Porta's playing and arranging, Themes and Variations would be an excellent starting point."