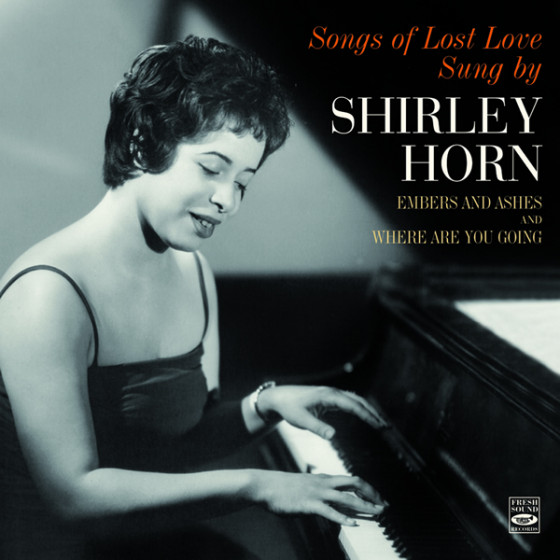 Shirley Horn (1934-2005) was an accomplished pianist who happened to sing extremely well–infinitely superior to almost all of the many so-called jazz singers who were much better known than she was. Shirley Horn sang like Shirley Horn and no one else. There are no mannerisms borrowed from other singers, no phony funk or resorting to cliché. Her control of vibrato was enough to make her exceptional, but her approach to a pretty song was a mature one. As one of the most pleasing and most musical singers in the business: she embraced the melody, without strain or fuss and her singing was unpretentious and full of grace.

Now, Fresh Sound Records is proud to present, for the first time on CD in Stereophonic Sound, Embers and Ashes, Shirley’s first album, a gem that, considering her eminent reputation and a host of admirers, including Miles Davis, remained incomprehensibly forgotten after its release in 1960. In addition, this CD also includes another outstanding album that she recorded years later under the title Where Are You Going. Both deserved to be reissued again for the benefit of all her fans.

"One of the most influential jazz vocalists who doesn't get much acclaim anymore has to be Shirley Horn (1934-2005). Countless modern female singers sight her as a major influence, even though there is not much these days to listen to in order to see what the excitement is all about. This single disc, two album set features two albums separated by 12 years, and it’s worthwhile to see how she keeps steady on track while still changing with the times.

The first album, 'Embers and Ashes,' has her on piano and vocal with Joe Benjamin-Lewis Packer/b and Herb Lovelle-Harry Saunders/dr for a sophisticated mix of standards. She's warm and composed on “Like Someone In Love” and bluesy and emotional for “God Bless The Child”. Her fingers dance around the happy “Mountain Greenery” and dig into the dramatic “Softly As In A  Morning Sunrise” while her voice is penetrating for “If I Should Lose You”.

The 1972 session with Marshall T. Harris/ b, Bernard Sweetney/dr and Al Gafa/g has her in a seductive mood on “Do It Again” while she tackles modern material with a deftness on “Taste Of Honey” and “LA Breakdown”. There’s a harrowing “Consequences of a Drug Addict Role” that is not for the faint of heart, while ”Just In Time” plays to her strengths. Classy, tasty and timelessly uptown."