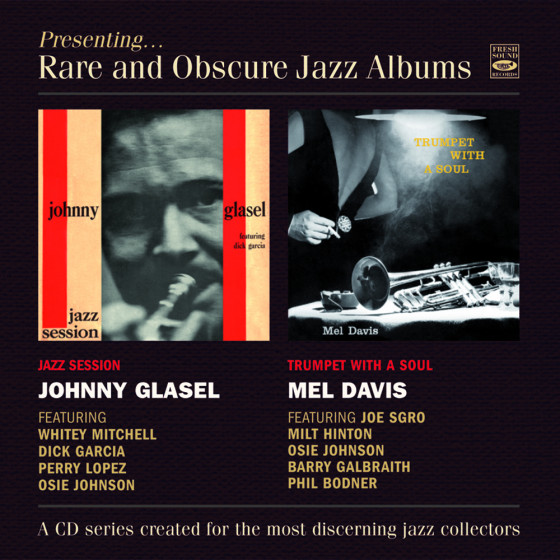 Jazz Session, Featuring Dick Garcia
Johnny Glasel (1930-2011) was a skilled trumpeter with a solid classical background, who came to prominence in the jazz field in the mid-1950s as a member of The Six. On Jazz Session, his first album as a leader recorded in 1956, he plays fluidly, backed by the warmth of a guitar, bass and drums. The entire session comes across as lucid and relaxed, and it is this relaxed air, this unpretentiousness, which strongly contributes to the success of this presentation. Glasel's conception was mature, and his technical resources allowed him to express his ideas. His support is excellent. Whitey Mitchell, called by Glasel “Red's East Coast brother,” plays well, and guitarists Dick Garcia and Perry Lopez surround Glasel's assertive tone with complementary vigor. Osie Johnson plays with delicious and tasteful efficiency as ever. Although Glasel did not have much influence as an instrumentalist, he did stand out for his memorable respect for rhythm and melody,realizing that concern for both can be simultaneous, and demonstrating that well-played jazz is a multi-faceted gem.

Trumpet with a Soul
After studying music at the Curtis Institute and at Temple University, trumpeter Mel Davis (1931-2004) played with the Philadelphia Opera Company and Symphony Orchestra. He had some interest in jazz too, but his concert teachers were the first and most significant influences in his subsequent development as a trumpet stylist. In 1954 he went to New York, and after playing all the jobs that came his way, he joined Benny Goodman's band in 1956, and traveled with him to perform in Thailand. That same year he recorded his first album Trumpet with a Soul, a collection of well-known standards played with tradi tional overtones. Davis is showcased with three different instrumentations. His sound is big-toned, lyrical and beautiful, and it stands out particularly on the ballads, which he plays directly and with a singing resonance.

"Spain-based label Fresh Sound Records shows that there are periods of Western Civilization when art is at a peak, and other times at a nadir. The mid 50s had such a surfeit of great sounds and bands that it was impossible to keep up with all of them. Thankfully, we have the chance to finally catch up with what really happened musically during the Eisenhower years on these pair of discs, each holding this rewarding yet obscure albums.

The first album has trumpeter Johnny Glasel in a light sounding session with Dick Garcia-Perry Lopez/g, Whitey Mitchell/b and Basie-ite Osie Johnson/dr on a cool toned 1956 outing. Garcia sounds like a mix of Johnny Smith and Herb Ellis, bopping on the muscular “Harvey Not Walter” with the bel canto leader, snapping on “Tow For The Show” with Glasel in open glory, and sublimely cooing with Glasel's muted horn on “Three to Make Ready”. Glasel does a rich calypso with Johnson and Mitchell on “Star Eyes” and gives an aria for “The Party's Over”. A forgotten treasure

Trumpeter Mel Davis has a big and bold Harry James of a tone, filling the room with his team of Joe Sgro-Barry Galbraith/g, Milt Hinton/b, Osie Johnson/dr and Phil Bodner/fl for a collection of 1956 sessions. His big vibrato is gorgeous on “Jeepers Creepers” of all things, stately on “I Should Care” and struts out “Roses of Picardy” He has fun with flutist Bodner on the sextet take of the schmaltzy “You're An Old Smoothie” and is dark with Sgro on “You've Changed”. Glorious horns.

Both albums have wonderful liner notes giving lots of background information. You'll get started on a treasure hunt for more of the same by these guys."