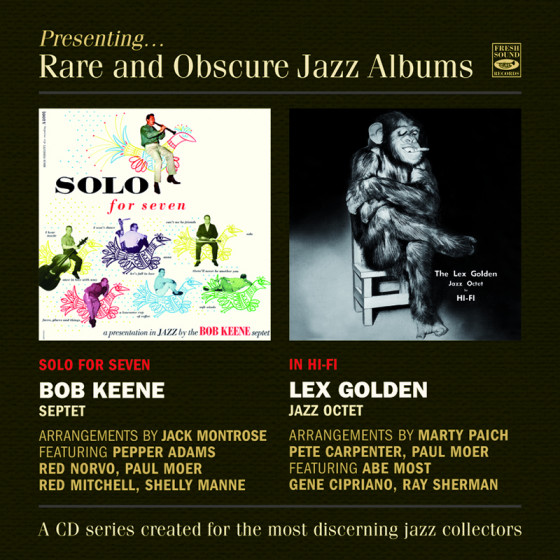 Solo For Seven
Bob Keene (1922-2009), took his first clarinet lesson at the age of six. At seventeen he signed with MCA as “The World’s Youngest Bandleader.” After World War II, he played with the Eddie Miller and Ray Bauduc bands, and in 1948 he was fronting his own orchestra once again, which appeared in almost every ballroom in Southern California for almost seven years. His first album came out in 1954 on the label Gene Norman Presents. After 1955 he decided to downsize, and for a time he led mostly smaller groups in clubs in and around Los Angeles. This continued until spring 1957, when he got the opportunity to join the more business-oriented side of music —Bob was involved in establishing a new company, Rex Productions, and became the musical director for the Andex and Keen labels. He produced his first sessions for Andex in May 1957, recording himself as a leader of two septets with arrangements by Jack Montrose, and featuring such illustrious jazzmen as Shelly Manne, Pepper Adams, Red Norvo and Red Mitchell. As a result, an album with the slogan “A presentation in jazz by the Bob Keene Septet” and with the title Solo for Seven, came out in September of 1957.

The Lex Golden Jazz Octet in HI-FI
When trumpeter Alexander “Lex” R. Golden (1913-2001) made his recording debut, his name was virtually unknown outside of Los Angeles. Still, he was by no means a Johnny-come-lately. Lex had had years of experience as an instrumentalist, gained working in almost every movie, T.V. and recording studio in Hollywood. Not only that, but starting in 1956 he performed in some of the most famous nightspots in Los Angeles with his band. On his album debut for Superior Records, Lex’s main purpose was to put together a set of tunes to “listen well and dance well,” with a jazz touch. With that idea in mind, he chose a talented group of arrangers consisting of Marty Paich, Paul Moer, Pete Carpenter, Bill Pitman and Ray Sherman, to write the scores for the jazz octet led by Golden and made up of some of the most accomplished Hollywood studio and jazzmusicians.

All tracks recorded at Radio Recorders, Hollywood, May 21, 1957

"This is one of a series released by Fresh Sound Records under the banner “Rare and Obscure Jazz Albums. Two hard-to-find LPs are on each CD”.

When clarinettist Bob Keene led an 18-piece orchestra in 1951 it was billed as one of the greatest bands since Artie Shaw’s. Shaw gave it his stamp of approval and considered Keene to be a worthy successor. However, Keene’s fame was fleeting and he’s since faded into obscurity. But members of his septet heard here, such as Pepper Adams, Red Norvo and Shelly Manne, still register strongly in the collective memory.

Standards from the likes of Kern, Loesser and Arlen are rearranged by Jack Montrose and provide us with 11 compact, highly melodic tracks delivered in cool jazz and swing style. The average length of each clocks in at 2.7 minutes. There’s nothing long-winded about Bob Keene!

Prior to the recording of In Hi-Fi, trumpeter Lex Golden was all but unknown outside Los Angeles where he led dance bands in the city’s nightspots. However, he’d had years of experience as a Hollywood studio musician working in film and television and this is demonstrated in the quality of his personal input here.

The band are no mean outfit either, with decades of studio and recording work between them. For example: Abe Most played with Tommy Dorsey; Richie Cornwell played the drums on Presley’s Love Me Tender; Gene Cipriano worked with Sinatra, Stan Kenton and many others; Ray Leatherwood recorded with Doris Day, Rosemary Clooney and Julie London.

Golden used accomplished arrangers such as Marty Paich and band members Ray Sherman and Pete Carpenter to write these scores. His septet delivers a splendid performance, bringing to life the danceable, mainstream jazz current at the time. A couple of contrasting numbers are provided for balance, not least a thoughtful rendition of Yesterdays where the trumpeter sounds uncannily like Eddie Calvert – the man with the golden trumpet.

Fresh Sound use advanced technology to restore these old recordings and in most cases improve on the original sound. In this instance they’ve excelled. Each track is crystal clear and the album is a great listen. It comes with an informative booklet, mostly about Keene, with several photos of both bands."

How did we miss all of these? Rare and Obscure Jazz Albums...

"Fresh Sound Records, the label that has given us collection of music from B movies and undeservedly overlooked vocalists, has now expanded their horizons with a brand new mouth watering category of recordings. This latest set consists of albums made by musicians that made a living in the studio and got one or two chances on their own, or for some strange reason were simply overlooked.

There isn't a single album here that isn't essential for jazz fans. Each packet comes with (usually) a list of all of the musicians and some fantastic liner notes to give you some background to the featured artist.  Sure, I'm going to review them, but the subtitle under each summary is “Go get it... NOW!”

Clarinetist Bob Keene has a rich and lower register Jimmy Giuffre/Woody Herman kind of sound, using Jack Montrose's arrangements to West Coast Cool perfection with Hollywood studio studs Pepper Adams/bs, Red Norvo/vibes, Red Mitchell/b, Shelly Manne/dr and others on a mix of standards and originals. Keene is relaxed and sweet on “I Won't Dance” and richly sophisticated on “Solo”. Adams' baritone is molasses thick on “There'll Never Be Another You” and joyful with Norvo's vibes on “Can't We Be Frineds” and “Let's Fall In Love”. Rich blues abound on “A Lonesome Cup of Coffee” and the vibes are bouncy for “Soft Winds”. Breezy stories.

Trumpeter Lex Golden is found in his usual confines in Capitol Records back in 1957, but as a leader, with the likes of Abe Mostas/cl, Ray Sherman/p, Peter Carpenter/tb, Gen Cipriano-Lester Pinter/ts and Richie Cornell/dr for some vintage charts by the likes of Marty Paich. The ghost of Shorty Rogers abounds on the fun pieces like “Mule Train” and the bold “Lot's O 'Lex” with the team snapping like Basie on “Around The World”. Golden's trumpet is hip and muted on “Sweet Sue” and glorious with a wide vibrato on a bel canto “Yesterdays”. A drive with the top down on “GNU”"

"Fresh Sound Record's producer Jordi Pujol has set his sights on plucking every shred of music from every obscure label and re-release it; music that no one has actually been waiting for. Perhaps that is precisely why there is a worldwide market for it, otherwise he would have stopped using it long ago. Clarinetist Bob Keene had previously been involved with a big band and after its disbandment started his own label Andex with a septet, composed of the rich potential of the California studios. The arrangements are all by tenorist Jack Montrose, who does not play himself. They are executed professionally but in my opinion dutifully. With three horns in different combinations and Red Norvo's feather-light vibraphone, the songs are ripped apart every few bars. The melody is never far away, if not in a solo or in the opposite voice. From the soloists I listened pleasantly surprised to Bob Burgess with his fat trombone, from the Kenton band from five years before; more to my taste than the more famous, but somewhat inarticulate, playing Milt Bernhart in four songs.

Trumpeter Lex Golden is completely unknown, the jazz discographies have not recorded him either. Yet the group's music differs little from that of Bob Keene. The main soloists here are altoist Abe Most and pianist Ray Sherman. Of the latter, there is a piece in this danceable program that is out of step, as has occasionally been attempted there on that west coast, the abstract Headshrinker."