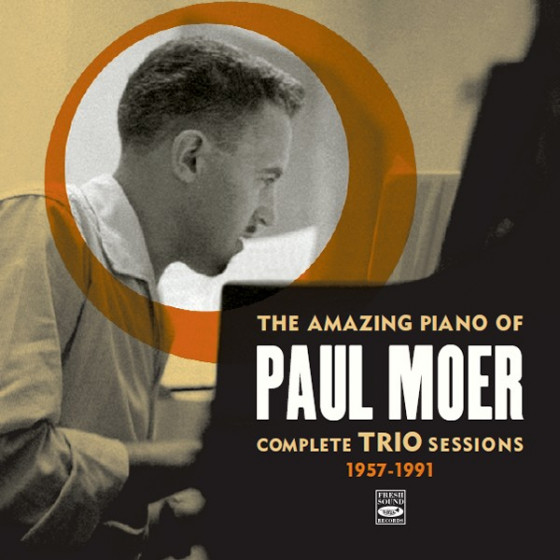 Even if his name is not immediately recognizable, Paul Moer (1916-2010) had a long and varied career as a jazz piano player. He worked with Benny Carter, Zoot Sims, Stan Getz, with the bands of Jerry Gray and Maynard Ferguson, and from 1954 until the early 60s, he recorded as a sideman with several noted West coast jazz musicians. As a leader, however, his record dates were few and far in between, as he stayed away from the jazz scene for long periods of time. This release includes all his trio sessions between 1957 and 1991.

The notes from his first 1960 album were eloquent about Moer’s skills: “This album is more than an introduction to a great pianist. It is opening the door for a brilliant young composer as well. Paul Moer is a painter: his music is a splash of brilliant color against the background of today’s musical scene. His brush is the piano and his paints are the colors of musical sounds, blended into melodies, sometimes cool, blue and haunting... sometimes free, abandoned, and swinging.”

Paul Moer never received the full praise that was due to him, but we hope this compilation serves as a modest but well deserved homage to his sharp piano work as a jazz leader.

"Apart from the first 11 tracks on CD1 Fresh Sound have issued all this material before, the Pour House material being issued over 30 years after its recording and the Elmo Hope collection being produced under the auspices of label owner Jordi Pujol, in an attempt to bring the relatively obscure Moer to a wider audience.

The pianist was lost to the jazz scene for many years, spending much time in the television studios, writing for many string-based ensembles and acting as arranger/musical director for singers like Eartha Kitt, Frankie Avalon and Rosemary Clooney. All this after a couple of successful years in the Paul Horn Quintet, having also worked with Stan Getz, Benny Golson, Zoot Sims and Maynard Ferguson.

There is no doubt he was an accomplished pianist, if not overly distinctive and he could certainly swing, in the company of some very good players as displayed on these trio sides, which include a number of his own compositions.

The Elmo Hope selections are nicely presented, bringing to life the attractive properties his fellow pianist’s tunes had to offer with Heard and Marable perfect partners in the project. This is a case of one neglected artist showcasing the oeuvre of another equally overlooked musician.

If Moer had not deserted jazz for virtually three decades we would almost certainly be viewing his career in a different light but inevitably he will always be viewed as one of the troops rather than of the officer class."

I truly thought I had heard of every jazz piano player from the 50s onward. What a total shock to discover this guy Paul Moer. And I can’t even make the excuse that he’s from Europe; he was born in PA, and spent a lot of time on the West Coast, teaming with the likes of Jimmy Witherspoon, Jack Montrose, Dave  Pell, Paul Horn, Rosemary Clooney and Stan Kenton. This two disc set features his trio work, and it is a wonderful collection of vintage hard bop.

Moer has a touch highly influenced by Wynton Kelly; filled with swing, style and class. There’s a single session from ’57 with Paul Chambers/b and  Philly Joe Jones that has “Neat Foot” filled with warm embers. After that, there is a studio session from 1960 Hollywood with Jimmy Bond/b and Frank Butler/dr, with a dramatic “We’ll Be Together Again” and totally hip “I Love Paris” and “Cute.” A 1961 gig at San Clemente’s “Pour House” has Maurice Miller replacing Butler, and the team is in a bopping mood on “Stay Even,” the snappy read of “Things Ain’t What They Used to Be” and the full fisted “Shop-A-Doddle-Op.” Moer is fluid, fun and filled with creativity as he digs in and crawls out of grooves. A final 1991 sessions finds him with John Heard/b and Lawrence Marable/dr getting into the Elmo Hope songbook, coming up with a bluesy “Maybe So,” a rich intro to  “Later For You” a Bill Evansy “Something for Kenny” and a grooving “Moe’s Bluff.”

A booklet inside gives tons of useful information on this guy as well as each session. Cudos to Fresh Sounds for bringing out a guy who’s guaranteed to stump your friends on a Blindfold Test. YOWZA!"