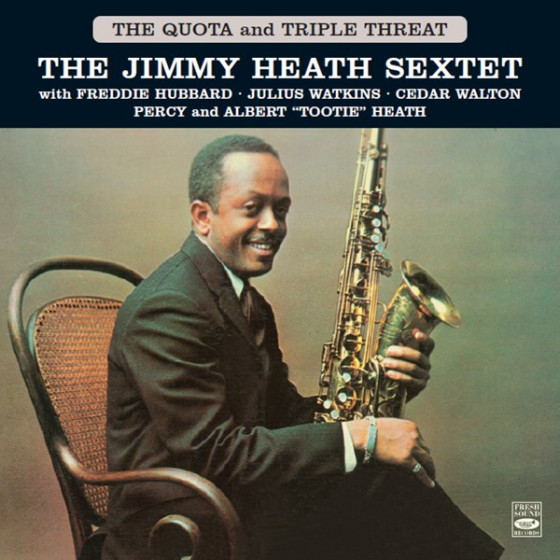 These two albums, The Quota and Triple Threat by the Jimmy Heath sextet, present the Philadelphia brothers-in-arms in a series of particularly impressive blowing sessions, thanks not only to the quality of the soloists, but also to the framework created by Heaths fine arrangements. There is a crisp, clean ensemble blend throughout, and Heaths loose, flowing scoring bring a sense of order for the wealth of good-to-excellent solo work.

The three horns deliver admirably on both albums. Jimmy with his strong, tough-playing tenor, is imaginative and swinging; and Julius Watkins and Freddie Hubbard, both top-rank men, are consistently interesting and entertaining. Watkins is a very effective performer, contributing notably in the ensemble, and Hubbard, especially, demonstrates deftly why he walked away with the 1961 critics poll citation as new-star trumpeter. Finally, Walton, Percy and Albert Heath are everything one could wish for in an assured and powerful rhythm section.

"Jimmy Heath's considerable talents are very evident on this fine hard bop title. His supple, Dexter Gordon-inspired tenor work shines throughout the album's seven tracks, which range from the challenging yet fleet originals "Funny Time" and "The Quota" to attractive covers like "When Sunny Gets Blue" and Milt Jackson's "Bells and Horns." Heath also mixes it up stylistically with elements of both East Coast jazz (Philly native, vigorous ensemble work) and West Coast jazz (spry, vaporous arrangements), showing his flexibility amidst the music's healthy, bi-coastal rivalry of the late-'50s and early-'60s California stars Art Pepper and Chet Baker would cover several Heath numbers on their excellent 1956 collaboration Playboys. The Quota also benefits from stellar solo contributions by trumpeter Freddie Hubbard, French horn player Julius Watkins, and pianist Cedar Walton; brothers Percy and Albert Heath handle the bass and drums chores admirably, and they make a family reunion of it. The Quota's strong material, tight arrangements, and thoughtful solos help make this Heath title one of the better hard bop releases available and a must for any jazz collection."

"Jimmy Heath has long been at least a triple threat as a musician (tenor, flute and soprano), arranger and composer. On this CD reissue, Heath sticks to tenor, performing "Make Someone Happy" and "The More I See You' while joined by pianist Cedar Walton and his two brothers, bassist Percy Heath and drummer Albert "Tootie" Heath. The other five numbers consist of four of his originals (best-known is "Gemini") plus a reworking of the ballad "Goodbye." For these selections, the quartet is augmented by young trumpeter Freddie Hubbard (who takes a few fiery solos) and Julius Watkins on French horn. The arrangements of Heath uplift the straightahead music and make each selection seem a bit special."

"Sometimes CD reissues hit you right in the G-spot. Was that (you wonder) really recorded more than half-a-century ago? And of course it was, and then (like buses) two come along together. The Philadelphia Heath brothers were in their pomp when these superb sessions were recorded for Riverside and they still bear the stamp of originality, top musicianship and good taste. Leader Jimmy was responsible for the arrangements and had that rare talent which can make a small combo sound like more than the sum of its parts. And with the unusual disposition of a French horn as a front-line instrument, this was a beautifully balanced group, due in part to the mercurial horn-playing of Julius Watkins (died 1977).

Watkins was the first to take that difficult instrument to a new level in jazz. From the French horn you expect sweetly brassy, swelling notes to thicken the broth of the ensemble: but this player with his extraordinary technique challenged the passionate solo flights of the (then) young Freddie Hubbard with articulate lines and exciting leaps into the high register. It still sounds quite impossible. Incidentally, he tutored current horn star Tom Varner for a spell.

In this notable double-album, Jimmy Heath contributed many of the themes, displaying a lively gift for melody: his simple 12-bar construction The Quota and his moodily expressive Lowland Lullaby with its slightly funky feel gave lots of lift-off for soloing. And every member of this band was at the top of his game in these studio gigs. Clearly a five-star rediscovery."

"Tenorist Jimmy Heath is one of the last living musicians that played under the shadow of Charlie Parker. He switched from alto so hed stop being compared to the icon. His composing and arranging skills set him apart from guys like Dexter Gordon, and as these two single discs from the late 50s and early 60s attest, he knew how to swing a band.

The Jimmy Heath Sextet consists of the ultra hip combination of Freddie Hubbard/tp, Julius Watkins/fh, Cedar Wlaton/p, Percy Heath/b and Tootie Heath on a pair of sessions from 61 and 62. The inclusion of Watkins French horn adds a rich texture to the mix, as everyone gets a chance to blow on Thinking Of You while the rhythm brother Tootie gets to have some fun on the fours. Heaths composing shines here on the irresistible Lowland Lullaby and the funky backbeat of Down Shift. Hubbard is the cock of the walk here, but Heaths tenor is a charmer as he glows on the standard Goodbye and goes bel canto on Make Someone Happy. This is stuff of what dreams are made."