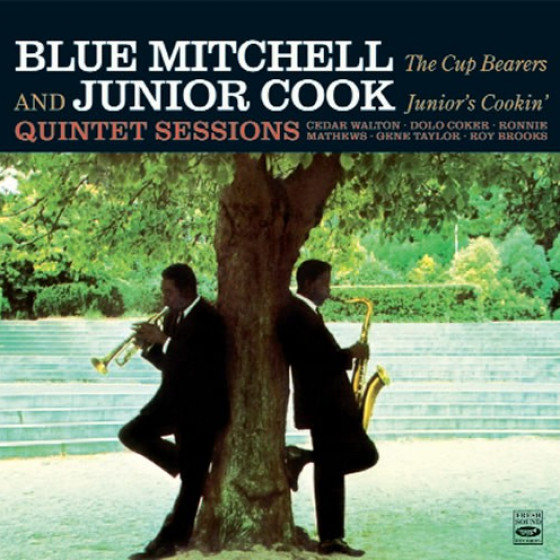 Equally fittingly, when they made Cooks Junior Cookin and Mitchells The Cup Bearers together, they used Silvers rhythm section, minus the man himself, whose place was taken by Dolo Coker alternating with Ronnie Mathews on the former, and by Cedar Walton on the latter. And unsurprisingly, the results, honest, forthright and inventive, possessed a hard-swinging unity that satisfies to this day.

That unity was emphasized by contrasting characteristics of the two Florida-born leaders. While both were powerful soloists, strong and individual, Mitchell was perhaps the more lyrical of the two, his work expressed with a lovely singing tone, while Cooks personal synthesis of several postbop tenor styles produced a more direct and heated player. Buttressed by the well-schooled, superior talents of Coker and Mathews, and the marvelous Walton in a thoroughly sympathetic rhythm section completed by Gene Taylor and Roy Brooks, the mixture gelled emphatically.

"Few sounds this side of heaven are as wonderful as those delivered by what is called the Classic Hard Bop Quintet. Usually consisting of a front line of trumpet and tenor sax along with piano, bass and drums, this simple enough ensemble has been able to do amazing things in the hands of geniuses like Horace Silver and Art Blakey. Its still used today, but these two reissues from Fresh Sound uncover two bands that were around at the halcyon days of this music, but were unfortunately unappreciated until (hopefully ) now.

Blue Mitchell/tp and Junior Cook/ts were long term members of Horace Silvers band beingon classics such as Blowin The Blues Away. This single cd has two sessions from 61 &61 that they put out on their own, and its in the same wonderful vein. Dolo Coker, Ronnie Mathews or Cedar Walton handle the piano, Gene Taylor is on bass and Roy Brooks hits the drums on this set of cooking originals and standards. Like Silvers band, these gents like to throw n a couple minor key misteriosos, and Mzar along with Sweet Cakes fit that mood perfectly. Cook is warm and rich on Easy Living and Mitchells gentle spirit is felt on How Deep Is The Ocean. This music sounds as fresh and timeless as Mozarts late Symphonies."