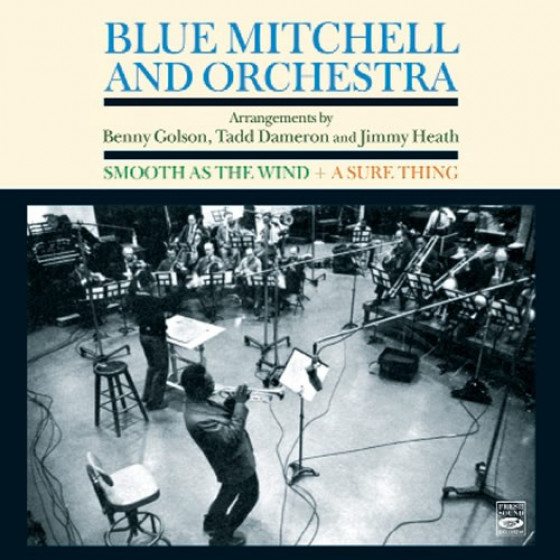 When these recordings were made in early 60s, trumpeter Blue Mitchell was already a mature artist: a thoughtful musician with an individual voice, who had made a name with Horace Silvers quintet from 1958 onwards. Both Smooth as the Wind and A Sure Thing were true hallmarks in his career. Designed to show all his talents, in them he is supported by two large and fascinatingly seductive settings. The first is a summation of the tonal color, lyricism, and good taste that marked Mitchells playing up to that point. Benny Golson and Tadd Dameron wrote and conducted the skilled strings-and-brass orchestrations. While Golson provides more space for the soloist and arranges pretty little backdrops for him to play off, Dameron supplies intricate patterns of voicing and musical shifts.

The second album presents Mitchell in a vigorous and well-balanced set of arrangements scored and conducted by Jimmy Heath. Apart from Mitchell, one of the most melodic trumpeters of his generation, Heath (on tenor) is the other main soloist, in virile and inventive form throughout. Baritonists Pepper Adams on Blue on Blue, and Pat Patrick on Hip to It, also contribute a couple of tough, passionate solos, while Wynton Kelly is the personification of self-assurance, good taste, and unabated swing throughout.

Personnel on Smooth as the Wind:

Personnel on A Sure Thing:

On #17 only Mitchell, Heath, Kelly, Jones and 'Tootie' Heath.

Note: Track 18 is part of the Blue Mitchell LP The Cup Bearers, included on the CD Blue Mitchell & Junior Cook (FSR-789), but Why Do I Love You? was left out because it did not fit the maximum playing time of the CD.

"Blue was already established as a top trumpet soloist with Horace silvers quintet when Riverside attempted to give him a change of pace and setting. They provided string and brass orchestras and, on 7 of the first ten tracks, highly serviceable arrangements by Tadd Dameron, that most underrated of the top modern jazz writers. Always a melodist, Blue gives his own very personal accounts of standards like But Beautiful, The Nearness Of You and Best Things In Life Are Free. His brassy, warm sound shines out on these and compositions by current, at the time, boss, Silver and Wes Montgomery. Other arrangements by Benny Golson and Jimmy Heath are very good but lack the special sound that Dameron always conjured up. The Dameron penned tracks also benefit from having Philly Joe Jones at the drums. He gives an extra lift and blazing swing to all the pieces he plays on.

Although these tracks sometimes sound like the old with strings sessions that all top soloists of the time used to get involved in, there is more variety, particularly on the A Sure Thing session where Jimmy Heath has several biting solos and baritone man Pepper Adams has a brisk workout. Smooth as the Wind and A Sure Thing were originally issued as two separate LPs and the full contents of both are on this single Fresh Sound CD. Hootie Blues has one of Blues best and most lyrical solo outings and there is a strong contribution from pianist Wynton Kelly. The final selection here is Why Do I Love You and comes from a third session, The Cup Bearers, which featured the current Horace Silver band with Cedar Walton on piano in place of the leader."