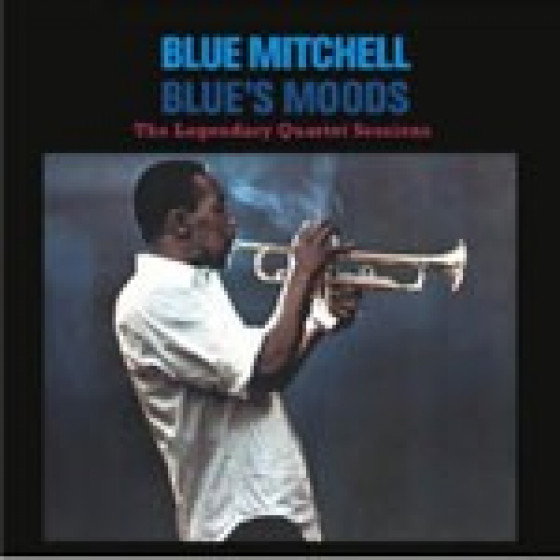 This CD contains Blue Mitchells complete original LP 'Blues Moods', the first album the trumpeter ever recorded entirely in a quartet format. He is backed by a wonderful rhythm section including Wynton Kelly on piano, Sam Jones on bass and Roy Brooks on drums.

Mitchell and Kelly had first recorded together for Mitchells 1958 album 'Big Six', a sextet LP (as its title clearly indicates) on which saxophonist Johnny Griffin, trombonist Curtis Fuller, bassist Wilbur Ware and drummer Philly Joe Jones were also featured. 'Big Six' marked Mitchells first album as a leader, and contained a single quartet track, Therell Never Be Another You (Mitchells first quartet recording ever, the song has been added as a bonus at the end of this CD).

Blue Mitchells third album as a leader, 'Blue Soul', was a sextet project (with Curtis Fuller on trombone, Jimmy Heath on tenor sax, Sam Jones on bass and Philly Joe Jones on drums) taped over three sessions in late September 1959. The third of these sessions, included here in its entirety as a bonus, was taped in a quartet format with Blue Mitchell as the only horn. Blues Moods, the aforementioned session for Blue Soul and the single track from Big Six, have been compiled on this edition, which constitutes Mitchells complete quartet recordings as a leader up to 1961, as well as all of his quartet recordings ever with Wynton Kelly.

"Of trumpeter Blue Mitchell's seven Riverside recordings, only this set -- along with three numbers on Blue Soul -- feature Mitchell as the only horn. Joined by pianist Wynton Kelly, bassist Sam Jones, and drummer Roy Brooks, the trumpeter is typically distinctive, swinging, and inventive within the hard bop genre. He performs four standards, plus Ronnell Bright's "Sweet Pumpkin," the obscure "Avars," and a pair of originals in fine fashion."

"Trumpeter Blue Mitchell left his home in Miami for a short stint in New York City, headed back to Florida, and then to Los Angeles before his brief but vital career as a jazz trumpeter ended. This sojourn identified his sound, initially branded by the warmth of the Southeast, burnished by the hustle and bustle of the Big Apple, and polished by the West Coast cool school demeanor. In 1959, as Mitchell returned to Miami, he connected with Detroit trombonist Curtis Fuller and Philadelphia tenor saxophonist Jimmy Heath to form one of the most potent three-horn front lines in jazz history. Few knew how good they were until after the fact, but this recording, the third album for Mitchell as a leader, has him and his mates in full flight. Drummer Philly Joe Jones has a lot to do with the solid booster rocket-like propulsion on this primarily hard bop date, and check out his calypso variations on the second chorus of the otherwise easy blues swing and ultra melodic "Waverley Street." Credit Mitchell's street smarts and highly developed melodic inventiveness as the focal point for this definitive session. In many ways, this is a parallel album to the Miles Davis classic Kind of Blue, with subtle undertones driven by fourth-gear swing.

[...] The set can hear in full dimension the cozy and warm persona of Mitchell on the ballad "Park Avenue Petite," but especially on the bright, easy swinger "Blue Soul," which most accurately approaches Kind of Blue [...] This is one of the most precious jazz recordings of a year that would soon give sway to the Blue Note sound, and is in many real and important ways as much of a prelude as any other statement. It's a must-have for all serious mainstream jazz fans."