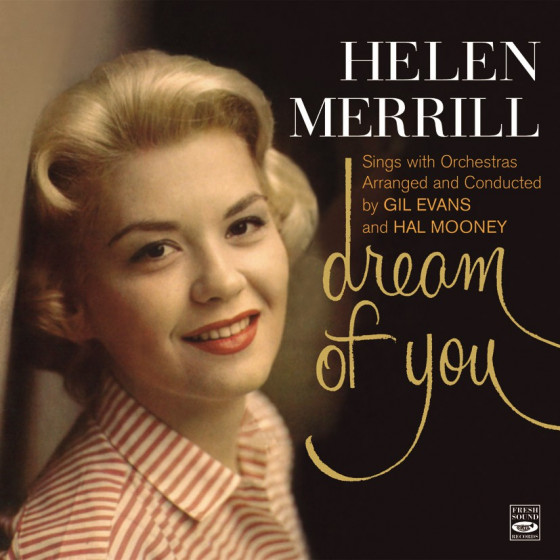 Helen Merrills vocal tone was always warm and husky. She developed from an apprehensive, untried singer, wanting to be accepted, into a calm and competent performer who could use her voice as an instrument of mood.

Dream of You (#1-12) was one of her best albums and an arranging triumph for Gil Evans, who did all the scoring and conducting. Evans, an extraordinarily sensitive and supple colorist, wrote with particular care for the contours (linear and emotional) of each song, as well as a measured understanding of Helens texture and phrasing.

The second album included here, Merrill At Midnight (#13-22), was recorded six months after the first one, and was another smash hit for Helen. This time the backgrounds were tailored to her own approach by Harold Hal Mooney. For this collection, she harvested some of the better bits of romantic poetry that existed in wisps among the voluminous Tin Pan Alley melodies.

"One thing that set Helen Merrill apart from other '50s jazz singers was her acutely dramatic vocal style. Her earnest phrasing, elongated notes, and incandescent tone might even strike the contemporary listener as qualities more appropriate for the Broadway stage than a jazz club. On 1955's Dream of You, though, Merrill found reconciliation, sounding both melodramatic and swinging within Gil Evans' darkly spacious, yet economical arrangements. Suitably, torchy ballads are prominent. On the somewhat grandiose side there's "Where Flamingos Fly" and "I'm a Fool to Want You," which find Merrill in a pensive mood amidst a variety of tempo and timbre shifts. More subdued ground is covered on "I've Never Seen" and "He Was Too Good to Me." Briskly swinging numbers like "People Will Say We're in Love," "By Myself," and "You're Lucky to Me" balance the program and feature the demure, yet fluid delivery Merrill favored on fast numbers. What is most impressive on this date is a group of sultry, medium tempo numbers including "Anyplace I Lay My Hat Is Home," "Just a Lucky So and So," and in particular "A New Town Is a Blue Town." The programmatic quality of Merrill's coyly sensual voice and Evans' slightly askew, bubbling reeds and languid rhythm conjure up dramatic, balmy southern scenes á la Tennessee Williams. In the picturesque arrangements one also hears the seeds of Evans' own future collaborations with Miles Davis. Even though her collaborations with Clifford Brown and others are great recordings, this one with Gil Evans shows off more of Merrill's expressive vocal talents, due in no small part to the sympathetic and urbane arrangements."

Helen Merrill recorded this lushly orchestrated album in conjunction with arranger/conductor Hal Mooney, with whom she'd previously cut a single, in early 1957. Opening with the moody and gorgeous "I'll Be Around," she moves into almost an art-song mode on "Soft as Spring," and her sound on "If I Forget You" veers perilously close to pop, complete with rippling harp arpeggios, as does "It's a Lazy Afternoon." But Merrill is so beguilingly subtle and hauntingly beautiful in her intonation, and maintains just enough of a blues base to her delivery here, that these songs remain consistent with the rest of the material and with her other output of the era. Actually, the whole album works by straddling all of this territory -- it's simply Helen Merrill and Hal Mooney bending a few genres in a more sophisticated musical setting than usual on her records. All of these elements get pulled together, and wound as tight and powerfully as possible, on the final track, "Black Is the Color of My True Love's Hair" -- that had to be the finish, because nothing else here could top it for sheer, understated power and impact [...] For anyone who has it, or the old LP, this one's a keeper and in a class by itself, with lots and lots of class.