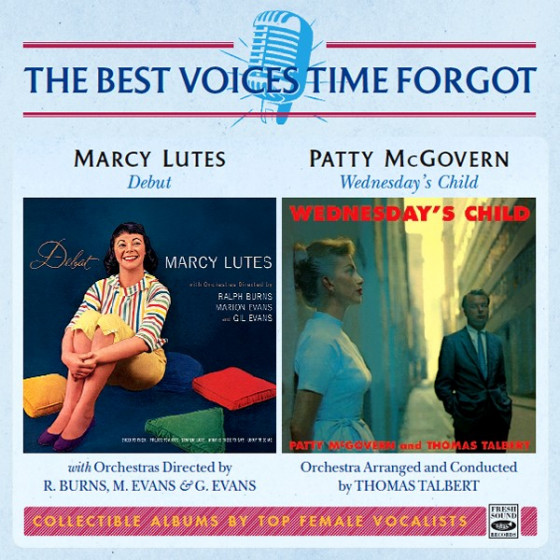 Debut
Marcy reveals an intense jazz feeling in her singing, with a certain leaning toward the ideas of Billie Holiday, and an improvisatory instinct and quick vibrato somewhat reminiscent of Mildred Bailey.

Wednesday's Child
Patty McGovern’s clear, cool voice and direct interpretation are supported here by the fresh and moody arrangements of Thomas Talbert in a program of songs prepared with unusual intelligence and good taste.

"This is one of the first pairings in what looks like Fresh Sound’s series of The Best Voices That Time Forgot and amongst many other things it’s a pairing for which (for once) there’s no hype behind the title.

Lutes was making such an impression back in 1957 that she has orchestras directed by Gil Evans, Ralph Burns and Marion Evans backing her. Cheek To Cheek, taken at a tempo Fred and Ginger would have been happy at, is blessed with the former Evans’ tonal colouring and Lutes basks within those colours like a singer who not only knows how to go about her business but also how to make her case.

Her pitch perfect (in the sense of being slightly plaintive) reading of the lyric to I Didn’t Know About You highlights also her sparing use of vibrato, a point which underscores her jazz sensibility and thus yet again raises the issue of the distinction between jazz and superior pop for those who fret over such things.

McGovern’s voice is of a darker hue, which enables her to extract unusual poignancy from You Don’t Know What Love Is. Indeed her feel is such, enhanced by the kind of distinctive Tom Talbert arrangement that serves her throughout the set, that she bridges the divide between singer and listener with notable aplomb.

Reiterating the pitch perfect point made above, All In Fun has McGovern effortlessly getting beneath the lyrical surface and a solo from Joe Wilder that empathetically complements her direct, unembellished approach beautifully."

"There are so many singers who recorded an album or two, or a few singles, or both, but never achieved widespread fame. Of course, there were many factors that could account for that, both with singers from yesteryear and young singers who are currently recording. These include timing, competition, changing popular tastes, record label promotion, management, personal decisions about sustaining a performing career, and luck. Just because a singer never made it big does not mean they were untalented, and all of the singers represented here are a case in point.

The second twofer features Marcy Lutes and Patty McGovern. “Debut” by Marcy Lutes is not new to me, as I discovered this album via a Japanese CD reissue about 10 years ago, and I thoroughly enjoy it. Five tracks are arranged and conducted by Ralph Burns, four tracks are arranged and conducted by Marion Evans, and three tracks are arranged and conducted by Gil Evans. Ms. Lutes sang with the bands of Ray McKinley, Benny Goodman, Tommy Dorsey, Herbie Fields, and Tex Beneke, and this album is her only solo recording. Her voice has the light and flexible quality that so many former big band singers had. Highlights on this album include “Cheek to Cheek,” “Prelude to a Kiss,” “Buds Won’t Bud,” and “Lucky to be Me.” Even though there are three different arrangers, their styles work well together in the context of a single album.

Ms. Lutes seems to have disappeared completely from performing and the public eye after about 1960. Originally from Edinburg, Indiana, she was living in Indianapolis in 1971, but after that the trail grows cold, and it is unknown to me if she is even still alive.

“Wednesday’s Child” is the title of Patty McGovern’s album, which was arranged and conducted by Thomas Talbert. Ms. McGovern has a measured and controlled but bright voice. The information about her available on the internet is nearly nonexistent, but it appears that she was originally from St. Paul, Minnesota, and was part of a singing group called the Honey Dreamers, which was known for intricate harmonies. This makes sense when hearing her sing on this album, because anyone who sang with a group like that has to be technically excellent. Her voice is expressive, but she never overdoes the emotion. The arrangements are jazzy and melodic and do not sound dated, and stand well on their own. In fact, they are rather forward-thinking for 1956. This is not surprising, because Mr. Talbert once had his own orchestra, and he arranged for bandleaders including Buddy Rich, Claude Thornhill, and Stan Kenton. There are a lot of flute accents. Like Patricia Scot, Ms. McGovern’s voice does not remind me of any other singer. And, like Ms. Scot, on this album Ms. McGovern sings two of her own compositions, “I Like Snow” and “Love Isn’t Everything,” which are excellent. As of 2014, Ms. McGovern was teaching voice and piano."

"If cool-toned voices in the vein of June Christy, Anita O'Day and Chris Connor are your thing, you are set for a series of discs made for your ears, as Fresh Sound Records has uncovered a cache of ladies that were under-recorded, under-appreciated and under-exposed during their time, but have been brought back into the light to be re-evaluated. Each singer is surrounded by some top notch jazz artists and arrangers, with names like Bill Evans and Gil Evans just for starters to whet your palate. Put on your seat belts for this ride!

Marcy Lutes’ 1957 Debut boasts orchestras directed by Ralph Burns and Gil Evans, thank you. This impressive session features Shorty Baker/tp, Cleveland, Herbie Mann/fl, Al Cohn/ts, Zoot Sims/ts and Osie Johnson/dr among others. Evans’ sleek arrangements well frame Lutes’ clean tone on “Cheek to Cheek” while the muted horns make vo-cool heaven on “Travelin’ Light.” With Burns at the baton, the woodwinds are rich on “I Got It Bad and That Ain’t Good” while Marion Evans’ charts add harp for a rich aria on “Make the Man Love Me.”

Patty McGovern’s 1956 Wednesday’s Child features her Anita O’day toned voce in a rich warble with and band that includes Jerry Sanfino’s flute and Barry Galbraith’s guitar on “Alone Together” and a peppy “Will You Still Be Mine.”McGovern is dreamy on “Crazy He Calls Me” and impressionistic with Joe Wilder’s trumpet during “I Like Snow.” These ladies are really going to surprise you.

For each album of the serie, there are excellent liner notes to provide the background for the singers, explaining the paths and projection of their short careers. Albums like these make you wonder why certain vocalists “make it” and others have to wait half a century to finally be appreciated. You won’t be disappointed by these discoveries."