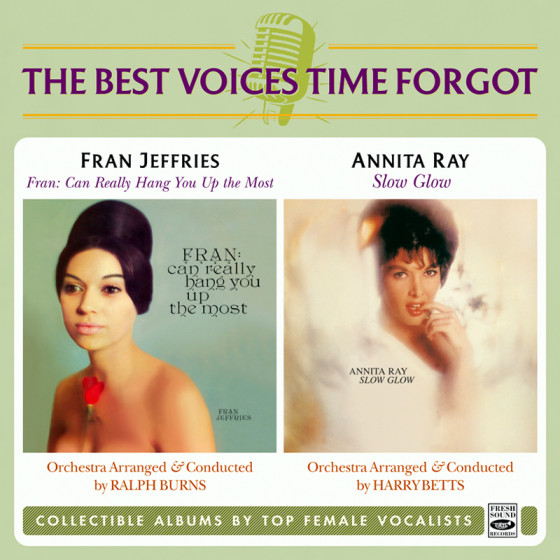 Fran: Can Really Hang You Up the Most
Beauty and talent combined in Fran Jeffries (1937-2016), a complete entertainer with a warm, sultry, distinctive style and complete command of lyrics and melody in every performance. She believed… thought… lived and inhabited the songs. As a singer and entertainer she oozed sexual allure —and more besides— with a persuasiveness that would melt the stoniest of hearts. On her first album, "Fran: Can Really Hang You Up the Most," recorded in 1961, the orchestra conducted and arranged by such a talented bandleader as Ralph Burns provides Fran with the ideal setting to prove that she sounded like no one else. Hollywood also surrendered to the charms of a singer of this range and sophistication, and although her film career was short, she will always be remembered for her stunning performance of Meglio Stas era in the memorable party scene from “The Pink Panther”; and for her suggestive and exciting interpretation of the theme Sex and the Single Girl in the film of the same title.

Slow Glow
This is Annita Ray’s first and only album. The former Ray Anthony ‘Bookend’, moved on to become a solo act, and to record in1962 this intimate set that is well within the romantic-ballad idiom. Much of the credit for establishing and maintaining the intimate mood, though, goes to Harry Betts for his warmly pulsing arrangements for string orchestra. The singer chose the songs herself —a mix of upbeat rousers and come-hither scorchers— and they are a perfect match for her surprisingly rangy alto swoon. Not only did she have a keen sense of musicality, she imbued each melody and lyric of an almost breathless intimacy that never descends to the affected. One might guess her voice is not a big one in the sense of power output, but no matter. What she does with her vocal equipment is beyond volume. On I’ll Be Around, for example, she soars away from the melody in perfect taste —a sensitive singer rather than just a pretty-sounding voice.

(*) Bonus Tracks not on the original albums

On #1-12: With Orchestra Arranged and Conducted by Ralph Burns
Recorded in New York City, 1961

On #16, from “The Pink Panther” Movie Soundtrack (1963)
Music Arranged and Conducted by Henry Mancini

"Barcelona-based Fresh Sound Records continues its service to jazz fans by coming up with previously obscure and overlooked vocalists that deserve a second and third listen. Here are the latest finds by the Sherlock Holmes of swinging singers.

The latest edition of their THE BEST VOICES TIME FORGOT series features Fran Warren, who actually made her name as a movie star is 60s films like “The Pink Panther”. Her voice is a combination of Doris Day and Rosemary Clooney, backed here by Ralph Burns' orchestra for a delicate and seductive “Isn't It A Pity”, a big bold and brassy “Mine Eyes” and a hip teaming with bass on “No Moon At All”. She gets dramatic on stage versions of “When You Away” and “Spring and Weather” and backed by Count Basie’s orchestra, she is street smart on “Sex and the Single Girl” and snazzy for “The Anniversary Song”. Classy lassie.

It's possible that the  Annita Ray may have only put out this one record is because someone heard it and snatched her up. She makes Julie London sound like Pollyanna as she seductively coos out “I Don't Want To Walk Without You” and chucks your chin during “The Heart That Broke Was Mine.” She travels down noir alley for the title tune, and warbles with Harry Betts' guitarist during “Oh, You Crazy Moon” while building up warm embers in her teddy during “I'll Be Around”. Who let her off her leash for this session?!?"