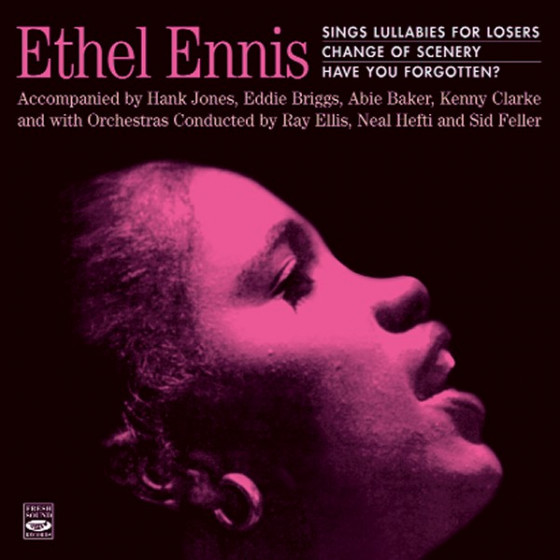 Sings Lullabies For Losers + Change Of Scenery + Have You Forgotten? (3 LP on 2 CD) + Bonus Tracks

Ethel Ennis was blessed with a remarkable voice and an innate jazz feel that she poured into everything she sang. Relatively unknown when she made these late Fifties recordings, her acclaimed debut album, Sings Lullabies For Losers, spread her fame beyond the small East Coast club circuit and her hometown following in Baltimore, where she was born in 1932. Made with a heavyweight jazz quartet that included pianist Hank Jones and drummer Kenny Clarke, it signaled the emergence of a major singing talent.

She moved to Capitol, with which she made her next two albums, Change of the Scenery and Have You Forgotten. For these the label wheeled out the big guns Neal Hefti arranged and conducted the orchestra for a well-judged programme of swingers and torch songs on the first, while on the second Have You Forgotten? she sings in front of three different backgrounds a large string section, a full brass section and a rhythm section plus vibes and guitar, conducted and arranged by Sid Feller. Throughout, Ethel Ennis handles the diverse settings with remarkable aplomb, with a sure touch for the nuances of feeling and phrasing and singing with a maturity beyond her years.

Ethel Ennis, sings in all tracks

"Ethel Ennis was blessed with a remarkable voice and an innate jazz feel that she poured into everything she sang. Oddly enough, however, her first professional jobs were as a pianist. I never thought of singing in a club, only in church. Then one night they asked me to sing. I was well received and decided to hang up and shingle as a singer. She made her professional debut in Philadelphia in 1950 on the Paul Whiteman Amateur show.

When these recordings were made, Ethel Ennis was relativelly unknown, except to a few American jazz connoisseurs devoted of the small club circuit up and down the Atlantic Coast; and her loyal local following in Baltimore, where she was born in 1932.

Her skillful and well-controlled phrasing is heard in this collection of songs she recorded during her early days. The first CD features her acclaimed 1955 debut album for Jubilee Records Sings Lullabies For Losers,featuring Hank Jones and Kenny Clarkewith the addition of I've Got You Under My Skin as a bonus track, and also a rare single she recorded for Atco Records.

The second CD features the two excellent albums she recorded for Capitol Records in 1957 and 1958. On the first, Change of the Scenery, shes accompanied by an orchestra directed by Neal Hefti, who is also responsible of the warmly pulsing arrangements of an exceptionally good program of rhythm tunes and torch songs.

On the second Have You Forgotten? she sings in front of three different backgrounds a large string section, a full brass section and a rhythm section plus vibes and guitar, with arrangements and conducting by Sid Feller. With these albums she proved she was an artist of taste, with a striking musical talent.

Although critical acclaim was not immediately followed by wider public success, word was getting round about her talent. In 1958 she was hired to tour with Benny Goodmans orchestra for a European tour.

Then, in July 1964, after 14 years on the small club circuit, the 31-year-old Ethel Ennis was discovered, after she appeared at the Newport Jazz Festival with such stars as Louis Armstrong and Dave Brubeck.

In those days, she was variously described her as a second Ella Fitzgerald, Sarah Vaughan or Peggy Lee, but she scorned any obvious labels, and described herself as a progressive pop singer. I hate to sing any song exactly as its written. Thats progressive. But I dont want to be so far out that people dont understand it, she said.

It was a credo she was to follow all her life. And its a credo amply demonstrated, with the taste, good judgement and the artistry with which she used her exceptional voice, in this collection of albums from the beginnings of her career on record."

"Ethel Ennis was in bed one night in the mid-1950s when Billie Holiday called.

Ms. Ennis was in her mid-20s at the time, a jazz vocalist on the rise and, like Holiday, a product of Baltimore. At first she figured it was a prank call. But she quickly recognized Holiday’s dusty voice.

“You have a great voice; you don’t fake it,” she later remembered Holiday saying. “Keep it up and you’ll be famous.”

Ms. Ennis soon fulfilled Holiday’s prophecy — but only for a short time. She recorded for major labels in the late 1950s and the ’60s; toured Europe with Benny Goodman; performed onstage alongside Miles Davis, John Coltrane and Louis Armstrong; and appeared on television with Duke Ellington. She became a regular on Arthur Godfrey’s TV show and headlined the Newport Jazz Festival. In 1961 she won the Playboy jazz poll for best female singer.

But she soon grew disillusioned with the demands placed on young divas, and she eschewed national celebrity for a quieter life in her hometown. She became a beloved performer and jazz advocate there, earning the unofficial title of Baltimore’s “First Lady of Jazz.”

“They had it all planned out for me,” she told The Washington Post in 1979, referring to the music executives in charge of her career. “I’d ask, ‘When do I sing?’ and they’d say, ‘Shut up and have a drink. You should sit like this and look like that and play the game of bed partners.’ You really had to do things that go against your grain for gain. I wouldn’t.”

She added: “I want to do it my way. I have no regrets.”
Ms. Ennis’s performances reflected her convictions. She sang in a sturdy, beaming voice that was quite different from Holiday’s tattered-silk purr.

She drew inspiration from crooners like Sarah Vaughan and Ella Fitzgerald, but her vocals were a touch less stagy, more direct. Her readings of popular songs and standards had as much in common with Etta James’s effulgent soul singing as with Fitzgerald’s elegant diction.

Ms. Ennis died on Feb. 17 at her home in Baltimore at 86. Gary Ellerbe, a Baltimore radio host and friend of Ms. Ennis’s, said the cause was complications of a stroke.

She is survived by her husband, Earl Arnett, and her younger brother, the saxophonist Andy Ennis, who played in Ray Charles’s band for 10 years before settling down, like her, in Baltimore. A previous marriage ended in divorce.

Ethel Llewellyn Ennis was born in Baltimore on Nov. 28, 1932, and grew up in the Gilmor Homes, a newly constructed public housing project in the West Baltimore neighborhood. She was raised primarily by her mother, Arabell, who played piano and organ in storefront churches, and by her maternal grandmother. Both caretakers were strict Methodists who refused to play jazz and blues in the house. But the music came thumping through the floor from the apartment below, and Ethel grew to love it.

She learned piano and began playing at the Ames United Methodist Church. At age 15, she started playing in nightclubs around town with an otherwise all-male band. When an audience member one night requested a blues song that required a female singer, she stepped up and sang it. It was a turning point.

Ms. Ennis became a mainstay of the Red Fox, a club on Baltimore’s main black entertainment strip along Pennsylvania Avenue. She was just 22 when she recorded her debut album, “Lullabies for Losers,” featuring the pianist Hank Jones and the drummer Kenny Clarke, for the Jubilee label.

That recording prompted the call from Holiday and a deal with Capitol Records. Ella Fitzgerald soon stated that Ms. Ennis was her favorite young vocalist, and Frank Sinatra called her “my kind of singer.”

Capitol released her album “Change of Scenery” in 1957 and followed it with “Have You Forgotten” a year later. In the mid-’60s Ms. Ennis put out four LPs on RCA. But rather than lean into her stardom, she decided to marry Mr. Arnett in 1967 (violating Maryland’s anti-miscegenation laws) and buy a house in central Baltimore.

She briefly landed back in the spotlight in 1973, when she sang the national anthem at President Richard M. Nixon’s second inaugural. A blizzard of media opportunities followed. Within days, she was invited onto the “Today” show and the nationally syndicated radio program “Monitor.” Her album “The 10 Sides of Ethel Ennis” was rushed into release. Sign up for Breaking News

Sign up to receive an email from The New York Times as soon as important news breaks around the world.

But she continued to focus on the home front. In the 1970s she appeared on a children’s show on Maryland Public Television. From 1984 to 1988 she and Mr. Arnett ran Ethel’s Place, a jazz club in central Baltimore.

In her final decades Ms. Ennis played about a dozen shows a year around the Mid-Atlantic region and released a few albums. She never stopped expanding her repertoire.

“If Women Ruled the World,” released in 1998 on the Savoy Jazz label, found her performing songs by Joan Armatrading, Joni Mitchell, Tracy Chapman and others.

That album’s final track, “Hey You,” is an original composition with a chorus that amounts to a statement of beliefs:"

I loved Ethel Ennis the first time I heard her in a Chicago jazz club circa 1959. She had a great voice, delivery and stage presence. Then in 1968, knew her guitar player from Baltimore who was playing with Buddy's Big Band. Later saw her in Hawaii. This CD offering is great and I will order it next month, thanks to Fresh Sounds Records.