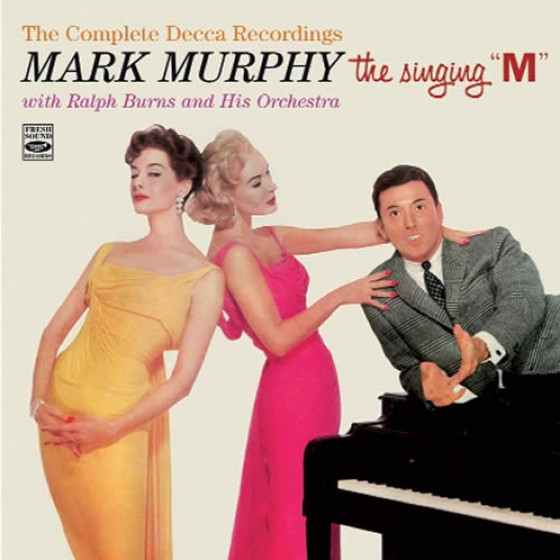 Affectionately nick-named the Singing M by Milt Gablerhead Decca a manMark Murphys jazz vocal interpretations established him in the front rank of the art.

Here backed by brilliant Ralph Burns jazz-flavored arrangements, he weaves magisterially through a variety of moods and tempos. Listen to his versions of Fascinating Rhythm, Limehouse Blues, Exactly Like You and Give It Back to the Indians, all included in his first Decca album Meet Mark Murphy, and its clear why Billboard saluted him in 1956 as one of the smartest, most unusual talents around. Murphy sings with a modern jazz feeling, and like an instrument. His unorthodox phrasing and sophisticated manner will register especially with hip deejays.

The reviews were equally flattering when his second Decca album Let Yourself Go, came out late in 1957. Elmers Tune, Taint No Sin and I Got Rhythm are among the best of numerous outstanding vocal performances. His phrasing is relaxed and distinctive, the voice totally under control and the intonation spot-on. With so much at his command and his uninhibited patter and scat singing, he remains a jazz singer to the manner born, capable of projecting his qualities regardless of context. And, courtesy of Ralph Burns, he has a fine setting here.

"Mark Murphy has to be one of the most influential if not one of the least known jazz vocalists. Just about everyone that is out there these days has been touched by the style, attitude and delivery of this guy thats been around since the 50s, and still occasionally performs. About 10 years ago, I took my then 11 year old daughter to see him perform and it hooked her onto the wonders of what a jazz singer can do.

Murphys career can be divided into 3-4 eras. This one represents his first stage, when he was a regular singer of standards. The only problem was that nothing Murphy touches stays standard. Even this songs youve known all your life are put through Murphys Waring Blender and oozed out into a completely different (and BETTER) flavor. Id LOVE to know what people with 1957-accustomed ears thought when they heard Murphy backed by Ralph Burns orchestra on these Decca sessions. Just wait until you hear him deliver a salacious Let Yourself Go and an exotically flavored Limehouse Blues. He does an agonizingly slow and deliberate take of Robbins Nest that will have you squirm while he snaps and sizzles on Pick Yourself Up and Crazy Rhythm and is delightfully as well as invitingly insouciant on Exactly Like You. Sonic ideas bounce off the walls on every song, and each delivery is fresher than anything put out by todays posers (I wont mention any names, but it rhymes with souffle)."