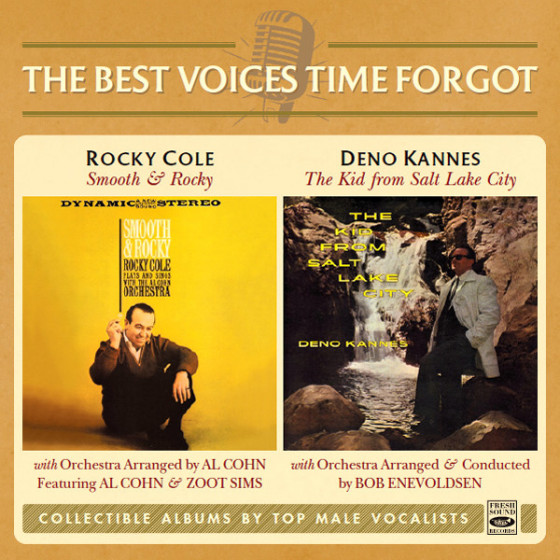 Smooth & Rocky
Rocky Cole was equipped with something rare, a refreshingly different originality. His piano playing is always inventive and exuberant, in a captivating way, and although his voice isn’t particularly elegant, filled with a rich, resonant vibrato, or exuding sticky sentimentality, it is no less magnetic. His unique delivery sets him apart, but then, everything Rocky did musically is characterized by his individualistic styling. Smoot & Rocky was Rocky Cole’s debut album and he wisely surrounded himself with an orchestra of adroit and gifted musicians arranged by Al Cohn, which features the unforgettable sound of the ‘four brothers’ –three tenor and one baritone saxes, which first came into prominence in the famed Woody Herman Third Herd aggregation. This ‘four brothers’ sound is made up here of Al Cohn, Zoot Sims and Frankie Socolow playing tenor sax and Steve Pearlow on baritone sax. In these recordings the highly effective sax section, along with Rocky’s voice and piano styling created a new sound you will often want to return to and enjoy.

The Kid from Salt Lake City
Deno Kannes, a product and resident of the state of Utah, was a young singer in the musical story-telling tradition of such as Frank Sinatra and Jackie Paris. Kannes approached material much like a jazz instrumentalist, in the sense that he related his phrasing to the musical as well as the verbal content of a song, bringing forth musicality and vocal drama, hand in hand. In truth, it was his phrasing and awareness of sound which enabled him to marry well with his jazz accompaniment, rather than functioning as a hopeful alien on foreign ground. Much to his profit, Deno recorded The Kid from Salt Lake City in Hollywood, surrounding himself with some of the coast’s finest jazz musicians, with guitarist Howard Roberts playing an especially persuasive role. Most importantly, Bob Enevoldsen’s arrangements are functional and reflect an understanding for Deno vocalist’s needs.

"Here’s another edition of the prized BEST VOICES TIME FORGOT series by Fresh Sound Records. This one has Singer/pianist Rocky Cole, teaming with an orchestra conducted and arranged by tenor saxist Al Cohn, who recreates Woody Herman’s “Four Brothers” sax section sound along with Zoot Sims/ts, Frank Sokolow/ts and Steve Pearlow. Cole’s got a kind of het cat Louis Prima delivery, like he just pulled out a cigar to deliver the lyrics to cool readings of “Will You Still Be Mine” and “The Glory Of Love.” He also plays a Nat Cole style of piano in small group settings, sounding uptown on the peppy “I Wish I Were In Love Again” and suave during “Squeeze Me.” The velvety reeds give a 3D texture in support of Cole as his eyes twinkle on “The Late Show” and “Let’s Do It.” This guy is a gas!

Deno Kannes has a bit of Chet Baker with extra muscle in his voice, supported by an LA Orchestra conducted by Bob Enevoldsen/vtb-ts and boasting studio studs like Ronny Lang/as-fl, Jimmy Rowles/p, Marty Paich/p, Howard Roberts/g, Carson Smith/b and Fred Katz/cel. He’s dashing and debonair with Roberts on “Stars Didn’t Fall” and he breezes with the horns like he’s riding with the top down on PCH for “I Wish I Knew” and “Can’t Get Out of This Mood.” Katz and Roberts give chamber support for a dreamy “Why Try to Change Me Now”  and he croons to high heaving for “It’s The Sentimental Thing To Do” and “Oh! You Crazy Moon,” sounding upbeat all the way.