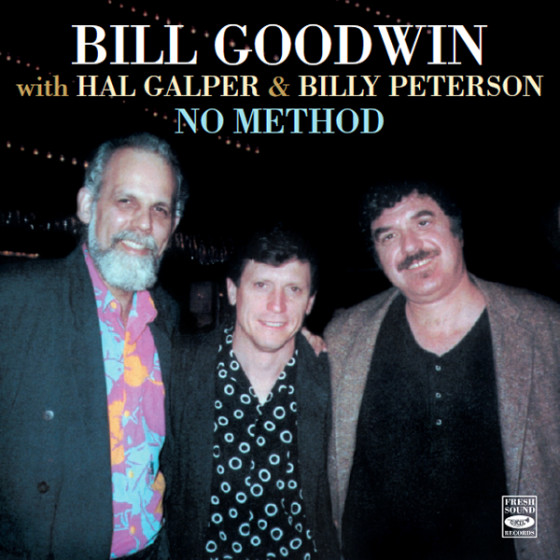 The trio, or three piece band is a favorite format of mine and I have played in a lot of them, notably with Leroy Vinnegar and Michael Melvoin, Melvoin and Jim Hughart, Red Mitchell and Tommy Flanagan, Hampton Hawes and Chuck Israels, Bill Dobbins and Michael Moore, and Hal Galper with Dave Holland and later Steve Gilmore. My own records have featured guitar trios with John Scofield and Stephen Swallow (Solar Energy) and Vic Juris with Tony Marino (Network).

Three is a magic number, leading to maximum interplay, an ever regenerating triangle. This trio uses a “conventional piano trio style” as a departure point but arrangements are open to all avenues of approach. This music is different every time it is played, it is a kind of “Structured freedom” or what I call “the no method, method.” This record was made on a Sunday afternoon in Minneapolis, Minn. while the trio was appearing at The Artists Quarter, a noted jazz club.

Pianist Hal Galper has been my friend since 1965, musically associated since 1973 and a bandmate since 1981 (in the Phil Woods Quintet). He is the perfect pianist to play in trio with, combining the best of “orchestral”, two-handed playing with exciting single lines. Hal is very fresh in his ideas, and is always moving forward to dramatic high points. Nobody does trio better. A fine composer-arranger, Hal is also a great accompanist and has played with many great artists: Sonny Rollins, Dizzy Gillespie, Stan Getz and Cannonball Adderley.

Bassist Billy Peterson was introduced to Hal Galper and myself three days before the day we recorded this music, recommended for the engagement at The Artists Quarter by drummer Kenny Horst. The rapport between us was immediate. Billy has been a fixture on the music scene in Minneapolis for many years, functioning as a jazz artist, recording musician and producer. He is a great natural musician on bass and also plays piano and drums. Lately Billy has been traveling with rock singer-guitarist Steve Miller, and composer-singer-pianist Ben Sidran, and producing eclectic guitarist Leo Kottke.

Myself, Bill Goodwin have been with the Phil Woods Quartet and Quintet since 1974. Before that I worked with a lot of bands, including Charles Lloyd’s, Bobby Hutcherson’s, Paul Horn’s, Stan Getz’, Bill Evans’, Lew Tabackin’s, and many others. Lately I’ve been playing with The George Robert-Torn Harrell Quintet and producing records. (35 albums since 1980.)

The proximity of The Artists Quartet to the wonderful studio called “Creation Sound” led to the recording session. We set up and got sound. We then warmed up on Jimmy’s Tune. We did two takes on that and then one take on everything else. I think the music speaks for itself, and the three of us hope it says something to you. Peace.

"When a trio is happening, it's such a warm, inspiring thing. The magic is in the collaborative relationship between the piano, bass and drums, the sensitivity of the artists and the sifting together of the ingredients particular to their instruments. Drummer Bill Goodwin has played and recorded in many terrific trios, as well as in brilliant small ensembles. Leaders of those dates have included Gary Burton, Gábor Szabó, Paul Horn and Phil Woods.

Goodwin has enormous taste and technique whether he has brushes or sticks in hand. He stirs up a lot of brass and hide but never overshadows. All of this is evident on a superb album Goodwin led in 1989 called No Method. Hal Galper was on piano and Billy Peterson was on bass. Leave it to Jordi Pujol of Fresh Sound to bring these three together back then and now reissue the session on CD and digital download. Goodwin recorded two other excellent albums with Galper—Wild Bird (1972) and Inner Journey (1973). This was their third. Recorded at Creation Studios in Minneapolis, Minn., in 1989 and produced by Jordi, the trio played Jimmy Mosher's Jimmy's Tune and the standards I Fall in Love Too Easily, Samba de Orfeu, Stella by Starlight, Everything I Have Is Yours and There Is No Greater Love. The elegance and snap of these three really is something.

Galper is particularly tremendous here, with Ahmad Jamal's delicate quality in places contrasted with a fuller, commanding two-hand chord technique that will set your hairs on end. If you're unfamiliar with Galper's marvelous playing, this is a perfect entry point. Peterson's bass is enticingly strong and robust. And of course, there's Goodwin, dropping in percussive splashes and pretty patterns throughout that bridge Galper and Peterson neatly. Treat yourself. This is a must-own piano trio album."

"During the 80s and 90s, alto sax legend Phil Woods had arguably the best small acoustic group around, with classic albums like Bop Stew, Heaven and Bouquet setting the standard for modern bop sounds. This studio recording from April 2, 1989 in swinging Minneapolis, Minnesota, includes 2/3 of the rhythm section, drummer and leader Bill Goodwin with pianist Hal Galper (who also worked with Stan Getz during these years). With Billy Billy Peterson on bass, the trio works through a half doesn’t straight-ahead standards, along with a crisp bopper in “Jimmy’s Blues”. Goodwin is a master here, giving deft brush work to the gliding “Everything I Have Is Yours’, creating nimble military patterns on “Samba De Orfeu” and mixing well with Galper’s glassy touch on the classy “I Fall In Love Too Easily” and forming a nice frame for the glassy ivories on “Stella By Starlight”. Everyone stretches out a bit on the ten minute “There Is No Greater Love” with the outing a perfect rendition of how a V8 Jazz Engine should run."