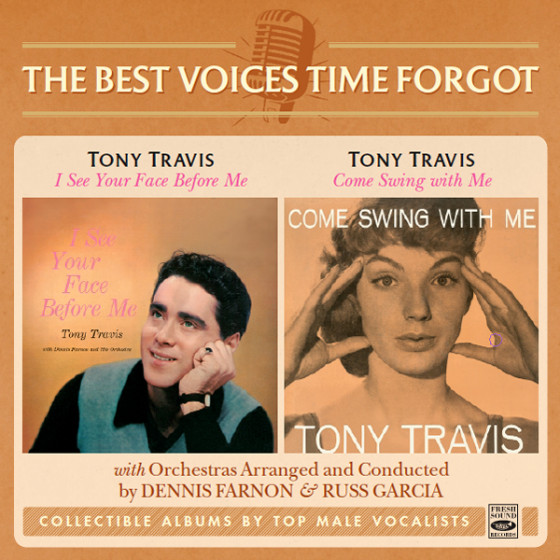 In the summer of 1954, Tony Travis launched his recording career as a singer with a single for RCA Victor which included It’s Easier Said than Done. His Sinatra-ish reading soon attracted deejays, and by 1955 he was performing around the country in a promotional tour with TV appearances. By November he was being heralded as “4th Most promising male vocalist” on Billboard’s Disk Jockey Poll. Right until the end of 1956 he recorded several more singles for RCA, as well as the LP “I See Your Face Before Me,” and in April the following year, he was signed to Verve Records by artist and repertoire topper Buddy Bregman. Tony became part of the label’s growing talent roster with his second LP, “Come Swing with Me,” but despite his success in the field, or maybe because of it, the young crooner turned to rock & roll music, and started getting roles on movies and TV.

This CD contains his two albums for RCA and Verve, full of Travis’ tasteful and swinging touch, and with rock-solid, stylish orchestral backings by Dennis Farnon and Russell Garcia. As a bonus we can also listen to four pleasant numbers recorded while he was under contract with RCA.

Tony Travis, vocals in all tracks

"It’s amazing how many jazz vocalists have been overlooked over the decades. Here are three reissue sets that make you wonder how some singers strike it big and others get overlooked, as no one here deserved the obscurity that they received.

Tony Travis was actually pretty well known for his acting roles, such as The Beatnicks and Perry Mason, but he also doubled as a crooner, sounding somewhere halfway between a vintage Mel Torme’ and an early Mark Murphy. His tenor’d voice is teamed with a 1956 Hollywood band that includes guitarist Howard Roberts and some nice alto sax work by Phil Sobel on “Georgia On My Mine” and the B-movie noirish “Moanin’ Low”. 1958 has him using the title Come Swing With Me a few years before Sinatra, but Travis sounds just as Rat Packy with Russ Garcia’s big band (which included Roberts, Nick Nash/tb, Paul Horn/fl, Larry Bunker?vb and Pete Condoli/tp) on the Basie-ish “They Can’t Take That Away From Me” , the extroverted “What Is This Thing Called Love” and the Vegas-stripped “Jeepers Creepers”. A night at the Golden Nugget."