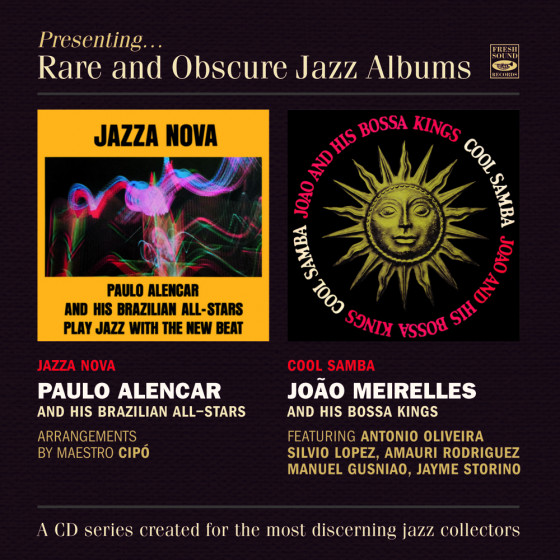 Jazz Nova
This is Jazza Nova, recorded by Paulo Alencar and His Brazilian All Stars in Rio de Janeiro in 1962, and originally released in Brazil by Odeon as “Bossa Nova Jazz.” The release speaks by itself: a jazzy LP fromthe early 60’s with a cast of all-stars musicians on set, and arrangements of Maestro Cipó. The instrumentation includes tenor sax, piano, guitar, bass, percussion, accordion, clarinet and trumpet in several different configurations. Unfortunately, the musicians involved were not credited, not even the gorgeous singer in Ziriguidum. Any bossa nova fan will really enjoy the music, and the masterful blowing. Billboard music editor Bob Rolontz said that: “Like their American counterparts, Brazilian jazzmen are deeply rooted in the jazz tradition and they play with soul and feeling. That feeling is evident on this recording of modern Bossa, which will be probably be called, from now on, Jazza Nova.”

Cool Samba
João Theodoro Meirelles (1940-2008), tenor saxophonist, flute player and leader of the Bossa Kings, was born in Rio de Janeiro. Having originally established himself in several of Brazil's big-name bands, he settled easily into club work in São Paulo and at the Bottle Club in Rio, where he played with top visiting American jazzmen such as Jim Hall, Nick Travis, Bud Shank, and Sam Most, as well as such Brazilians as Luiz Eça, Paulo Moura, Sergio Mendes and Moacir Santos. He was one of the musicians who took Brazilian instrumental music one step forward, beyond the songs with lyrics that singers and fans liked to sing. That is why it is said that João Meirelles was the creator of samba-jazz, a genre linked closely to the emergence of Bossa Nova.

Personnel on "Jazza Nova":
PAULO ALENCAR and His Brazilian All Stars
Arrangements by Maestro Cipó.
Recorded in Rio de Janeiro, 1962

How did we miss all of these? Rare and Obscure Jazz Albums...

"Fresh Sound Records, the label that has given us collection of music from B movies and undeservedly overlooked vocalists, has now expanded their horizons with a brand new mouth watering category of recordings. This latest set consists of albums made by musicians that made a living in the studio and got one or two chances on their own, or for some strange reason were simply overlooked.

There isn't a single album here that isn't essential for jazz fans. Each packet comes with (usually) a list of all of the musicians and some fantastic liner notes to give you some background to the featured artist.  Sure, I'm going to review them, but the subtitle under each summary is “Go get it... NOW!”

This pair of albums of bossa nova from Rio De Janeiro (1962) that sounds like the love child of Tom Jobim. The first one, which sadly does not list the musicians in the “Brazilian All Star” band, is led by violinist Paulo Alencar, and is a sublime mix of Afro-Cuban (as on the boppish “Zirguidum”), Horace Silver hard bop (“Adios America” and “Na Ha Razao”) and Getz/Gilberto (“Ideas” and “Bossa No.2”). The unidentified tenor saxist has the Getz feel down to the bone, while the reeds sway to the Brazilian wind on “Why Do I Remember?” Ipanema ideas.

João Meirelles also plays a Getzian tenor sax, as well as flute, with a Brazilian small group that percolates with percussion from Amauri Rodriguez and Jayme Storino/dr. Meirelles glides over the pulsations on “So Danço Samba” and the congas for “Se Teus Olhos Falassem” while his flute is sensuously sunny on “Soluçao”. Afro-Cuban adventures get bold on the simmering “Carnival Medly” and Silvio Lopez's trumpet sashays along during “Batucada”. Where has this been my whole life?"