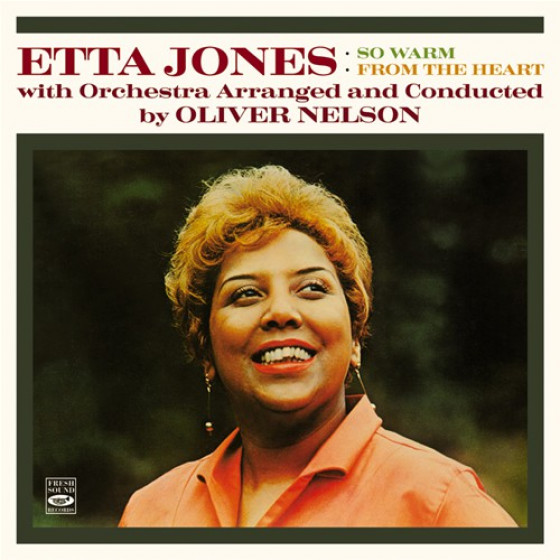 Etta Jones came to the public attention in the 1940s, but after she was revealed as a potentially important artist, nothing much happened commercially with her records. So, after a long period of obscurity, the arrival of Etta Jones in the LP best seller lists in 1961 was a stunning illustration of how suddenly an almost neglected artist could become a name vocalist with two albums: So Warm and From the Heart.

Miss Jones sense of drama was to lie about midway between Ethel Waters and Billie Holiday, but remained within hailing distance of Dinah Washington. That said, she was her own stylist. She had the ability to project a wide variety of moods, from anguish to exuberance. The arrangements on both albums, which include some handsome string writing, are by Oliver Nelson and were perhaps his most impressive achievement until then. Nelson had never written for strings before, and his only vocal-background arrangements had been for small combinations. I wrote as though the voice were an instrument, he said. Because of this, he took several chances and got away with them. Nelson gave Miss Jones some of the most complex accompanying lines to sing over ever confronting anyone.

"The sound of this release brings to mind a cross between Billie Holiday, Ella Fitzgerald and Patsy Cline. Not a bad combination, and one that sounds remarkably fresh and invigorating long after its 1962 recording date. Here, Etta Jones' swinging singing is augmented with Oliver Nelson's attractive and distinctive arrangements. Wally Richardson's guitar is especially noteworthy in the rhythm section, while Nelson's use of horns and strings is as wonderful as ever. From the Heart is a lot of fun, a too-long-forgotten gem that takes the listener back to a more innocent time and provides the perfect setting for Etta Jones to display her vocal wares."