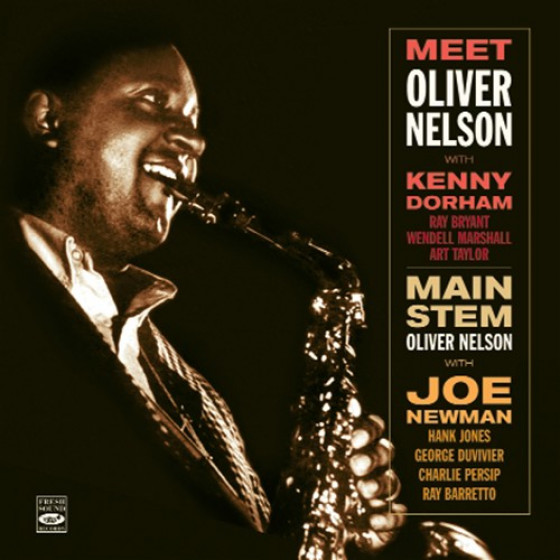 Meet Oliver Nelson marked the leader recording debut of a considerable talent in tenor saxophonist Oliver Nelson (1932-1975). He was to win even greater acclaim later as a composer and arranger, but at 27 he was already a vastly experienced performer and a notably imaginative soloist, affectingly sensitive on ballads like Passion Flower and Whats New, with a voluminous sound, full and fiery, on more driving material.

For his debut he had simpatico company in trumpeter Kenny Dorham, so lyrical on Booze Baby Blues, and a shrewdly chosen rhythm section in pianist Ray Bryant, bassist Wendell Marshall and drummer Art Taylor. It was a noteworthy beginning.

Recorded almost two years later, Main Stem was much more like a typical Prestige blowing session of the time, heavily dependant on the wit and invention of the participants. Fortunately, Nelson again chose his colleagues well. Trumpeter Joe Newman is particularly good and pianist Hank Jones is his usual lucidly impeccable self in a swinging rhythm section with bassist George Duvivier and drummer Charlie Persip, while the leader, on both alto and tenor, produces an abundance of melodic, well-constructed solos over a satisfying session.

"Nelson came out of Louis Jordans band in the early 50s. The album with Dorham was his first under his own name. His popularity soared and he seemed to be making an album every month over the next few years. It was a desperate waste when record companies drove him to commercial writing in his last years (he died in 1975 when he was 43). Theres no such problem with these two beautiful sessions. Lots of good free-blowing stuff with convivial company and beautifully recorded by Van Gelder. The album with Newman appeared here on an Esquire LP, but the set with Dorham is new to these shores.

Listening to these delicately done performances one must recall what we thought then of Nelsons status as a tenor soloist. He was a warm and lyrical improviser in the mainstream, as you can hear to perfection on Jams and Whats New?. These were triumphant times for his new talents and those of his similarly doomed pal Eric Dolphy. The support from Bryant and Dorham is heartfelt and the coincidence of Dorham sounding so much in the Newman groove is an apposite one. On the other hand the music sounds very traditional in contrast with Kind Of Blue, which had been done a few months earlier!

Newman was in good shape at this time and essays interesting Cootie and chicken noises on Mainstem. J & B, like Jams, is the full-toned wailing blues that the mainstreamers were so good at with open Newman in the ascendant. For Hank Jones it was just another day at the office, trickling perfection over everything. Im very glad to be able to add this excellent album to my collection."

"Long before Oliver Nelson became one of the busiest and most respected composers and arrangers on the Hollywood movie and television scene, he was a hard-blowing, exciting, bluesy tenor and alto saxophonist, and when the occasion called for it, a thoughtful balladeer with a beautiful tone and attractive vibrato. Fresh Sound has issued Nelson's first outings as a leader, both Prestige blowing dates, Meet Oliver Nelson, from 1959 and Main Stem, from two years later. Nelson, who left us much too soon at the age of 43 in 1975, is heard here as a soulful combination of Dexter Gordon with overtones of early John Coltrane, and it's easy to hear where he was headed in later years with albums like Blues and the Abstract Truth (Impulse!, 1961) and classic compositions like "Stolen Moments." He swings like mad, egged on by frontline partner Kenny Dorham on trumpet, pianist Ray Bryant, bassist Wendell Marshall and drummer Art Taylor on the first session. On Main Stem, Joe Newman plays trumpet, with a rhythm section comprised of Hank Jones on piano, George Duvivieron bass, Charli Persip on drums, and Latin percussionist Ray Barretto on some tracks. Many releases like this were taken for granted back in the day. We know now that they shouldn't have been."

Originally from St. Louis Missouri, Nelson began his professional career in 1947 at the tender age of fifteen playing with "territory" bands in the area. After a period of military service, Nelson returned to his home town to study at university and then moved to New York where he worked for Erskine Hawkins, "Wild Bill" Davis, and was in the Quincy Jones band in 1960 and 1961.

For this debut release Meet Oliver Nelson, Nelson surrounded himself with top-flight talent including veteran trumpeter Kenny Dorham and pianist Ray Bryant among others. Nelson penned four of the tunes all of which showed some of the signature instrumental construction for which he gained his later reputation. Dorham was a bebop trumpeter of note whose long lines and elaborate triplets became a trademark. The lead track Jams And Jellies shows glimpses of these Dorham traits but they are more prominent on Ostinato.

Pianist Ray Bryant always plays with distinction and never lets a soloist down with his supportive backgrounds. His own solos have a blues feel punctuated with a strong left-hand and fluid harmonic right hand. All this is evident on Don't Stand Up, but Booze Blues Baby oozes with typical Bryant mannerisms.

Throughout the session, Nelson demonstrates that he is an appealing tenor saxophonist with a full tone and agile technique. While he swings in a straight-forward fashion on the up-tempo numbers, on Passion Flower he plays with an admiration for Ellington's composition and on What's New? he demonstrates a pure fondness for the tune.

When Main Stem was released in the late summer of 1961, The Blues And The Abstract Truth had been on the market since February of that year and life for Oliver Nelson moved to a different trajectory. With almost universal acclaim for this album and its signature piece Stolen Moments, Nelson began his transition from small-group musician to big-band composer/arranger, and Main Stem was the beginning of the small-group final chapter.

Prestige Records was one of those labels that was open to musicians who were looking for freedom to play what and how they liked. Thus this session was a free-flowing affair, not only with the front line, but also with a rhythm section that had Ray Barretto on conga on all tracks. At the time of this recording, trumpeter Joe Newman was just completing a twelve-year stint with the Count Basie band. Newman was a well-tested and accessible trumpeter in the Louis Armstrong tradition. On the title track Main Stem, Newman rips off a stunning solo and again on Latino his big open sound takes flight in all its assertiveness.

Pianist Hank Jones is always Mr. Taste playing the right note or chord at the right time, and is always a harmonically knowledgeable player. His opening on the blues-based J&B is note perfect, and on Ho! he delivers a succinct opening chorus and then several bars later comes back-in with a dazzling short break.

The Oliver Nelson that is featured in this session on both tenor and alto saxophone is a player of intense passion who cherishes the space to stretch out and have the playing time to fully express his musical ideas: whether offering a series of measured approaches as he builds his solo on Main Stem, to the jumpier lines on Tipsy, and the single-take flowing runs on Tangerine with its Latin flavour.

This wonderful re-issue on Fresh Sound Records brings home the fact that Oliver Nelson was a deftly imaginative and engaging horn player, who regrettably later on in his career, had little time to continue to further his craft."