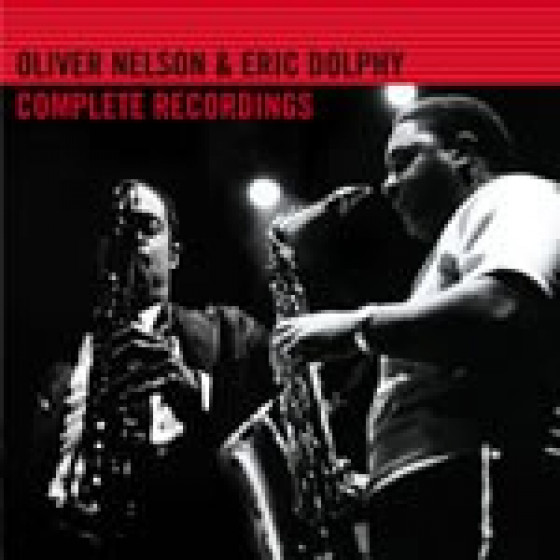 Oliver Nelson and Eric Dolphy combined their superb talents on just four albums, all of them recorded in 1960-1961. All four LPs are included here in their entirety in chronological order. The albums, all of them true classics, consist of Nelsons "Screamin the Blues" and "The Blues and the Abstract Truth," Eddie Lockjaw Davis "Trane Whistle," and "Straight Ahead," which showcase both Nelson and Dolphy as co-leaders. The great Roy Haynes is the drummer on all four LPs.

"Jazz cats in their prime."


"Ellington was the first major composer in jazz. On this disc you can hear him in the process of spontaneious creativity."


"Richard William's explosive entry on the opening solo makes you realise that something significant is going on here."

"Oliver Nelson (on tenor and alto sax) meets Eric Dolphy (alto, bass clarinet and flute) on this frequently exciting sextet session with trumpeter Richard Williams, pianist Richard Wyands, bassist George Duvivier, and drummer Roy Haynes. Although Dolphy is too unique and skilled to be overshadowed in a setting such as this, Nelson holds his own. He contributed five of the six compositions (including "Screamin' the Blues," "The Meetin'," and "Alto-Itis") and effectively matches wits and creative ideas with Dolphy."

"This set brings back an Eddie "Lockjaw" Davis session in which the distinctive tenor saxophonist is joined by a 13-piece big band arranged by Oliver Nelson. Most significant is the inclusion of the original version of "Stolen Moments" (here called "The Stolen Moment" and predating the more famous Oliver Nelson recording by several months). Eric Dolphy is in the backup group but is not heard from in a solo capacity. There are some spots for trumpeters Richard Williams, Clark Terry and Bobby Bryant along with Nelson on alto but this is primarily Davis' showcase. On a set comprised of four Oliver Nelson originals, the ballad "You Are Too Beautiful" and the leader's "Jaws," Lockjaw as usual shows plenty of emotion during his driving solos."


-The Blues and the Abstract Truth

"As Oliver Nelson is known primarily as a big band leader and arranger, he is lesser known as a saxophonist and organizer of small ensembles. Blues and the Abstract Truth is his triumph as a musician for the aspects of not only defining the sound of an era with his all-time classic "Stolen Moments," but on this recording, assembling one of the most potent modern jazz sextets ever. Lead trumpeter Freddie Hubbard is at his peak of performance, while alto saxophonists Nelson and Eric Dolphy (Nelson doubling on tenor) team to form an unlikely union that was simmered to perfection. Bill Evans (piano), Paul Chambers (bass), and Roy Haynes (drums) can do no wrong as a rhythm section. "Stolen Moments" really needs no comments, as its undisputable beauty shines through in a three-part horn harmony fronting Hubbard's lead melody. It's a thing of beauty that is more timeless as the years pass. The "Blues" aspect is best heard on "Yearnin'," a stylish, swinging, and swaying downhearted piece that is a bluesy as Evans would ever be. Both "Blues" and "Abstract Truth" combine for the darker "Teenie's Blues," a feature for Nelson and Dolphy's alto saxes, Dolphy assertive in stepping forth with his distinctive, angular, dramatic, fractured, brittle voice that marks him a maverick. Then there's "Hoedown," which has always been the black sheep of this collection with its country flavor and stereo separated upper and lower horn in snappy call-and-response barking. As surging and searing hard boppers respectively, "Cascades" and "Butch & Butch" again remind you of the era of the early '60s when this music was king, and why Hubbard was so revered as a young master of the idiom. A must buy for all jazz fans, and a Top Ten or Top Fifty favorite for many."

"A very interesting quintet set, Straight Ahead matches together Oliver Nelson (on alto and tenor) and Eric Dolphy (tripling on alto, flute, and bass clarinet). With the assistance of pianist Richard Wyands, bassist George Duvivier, and drummer Roy Haynes, the two reedmen battle it out on six compositions (five of Nelson's originals plus Milt Jackson's "Ralph's New Blues." Although none of Nelson's tunes caught on, this is a pretty memorable date. It certainly took a lot of courage for Oliver Nelson to share the front line with the colorful Eric Dolphy, but his own strong musical personality holds its own on this straight-ahead date."