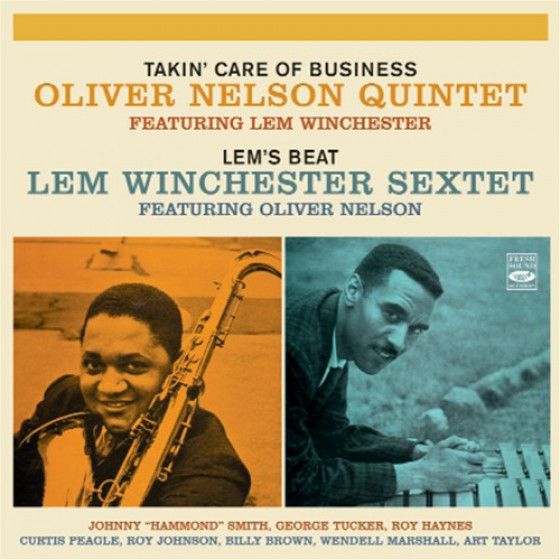 Although his later fame as a composer and arranger overshadowed his instrumental skills, Oliver Nelson (1932-1975), was a formidably distinctive performer on alto and tenor saxophones. He demonstrated this conclusively on his earliest albums as leader, none more so than on the aptly named Takin Care Of Business, where, playing mostly alto, he displays a rich purity of tone, a direct, uncluttered attack, and a beautiful singing projection.

On All the Way he opens with a gemlike unaccompanied solo, beautifully controlled and precise, but he also displays his power with urgent, vibrant solos on Groove and Trane Whistle. Lem Winchester has a secondary role, but contributes several fine vibraphone solos, while organist Johnny Hammond Smith is mostly used to lay a background cushion.

On Lem Winchesters Lems Beat album, the vibist joined forces with a luminously performing Nelson (this time on tenor only) and Curtis Peagler on alto. Lems ballad work on Friendly Persuasion has clarity and restraint, but he shows his fire on Your Last Chance and Just Friends. Nelson, too, plays superbly in these tunes, revealing different aspects of his playing in each. Pianists Billy Brown and Roy Johnson are capable performers, while Art Taylor and Wendell Marshall stoke the fires throughout Nelsons arrangements.

"The Oliver Nelson Takin Care of Business album is simply one of the best albums in his discography, showcasing as it does his prowess on both alto and tenor saxophones, a sadly neglected aspect of his far to short career. He is in full creative flow throughout on the half a dozen tunes, four of which are his own, emphasising his penchant for the blues, a strong thread running through so much of his lifes work despite his formal training. He is isolated during the theme statements, the others adding appropriate fills and adding some pretty meaty solos of their own to complement their leaders bold and incisive contributions.

The order of the day is to swing, both collectively and individually, no shirkers being in evidence. Winchester displays his Jackson-inspired approach with the mallets, Smith is everything one could ask of an organ man and the Tucker/Haynes axis are the very tasty marzipan underneath the icing. If you dont tap your feet to this one, then the blood has simply stopped coursing through your veins.

The Winchester record had similar values to hang onto, Nelson this time acting as a sideman, paired up front in an alto duo with Curtis Peagler. Once again the group is a well-integrated proposition, Winchester giving enough of himself to suggest that he had a great future ahead of him - a future that would sadly never materialise. Both horn men acquit themselves admirably and once again the rhythm section cannot be faulted. In essence these are two uncomplicated examples of early 60s modern jazz, both carrying the qualities of superior music making."

"Lem Winchester, one of the most promising figures in jazz, was a Wilmington, Delaware, policeman who left the force to become a full-time musician in. He was on his way to becoming a certifiable star when he shot himself while, some say, playing Russian Roulette, and died at the age of 33 in 1961. Winchester plays on Nelson's quintet date of 1960, Takin Care of Business (1960), which also featured the organ of Johnny "Hammond" Smith, highlighted by an early version of Nelson's "Trane Whistle." Winchester was headed toward individuality on vibes, as something of a combination of Milt Jackson's soulfulness and the swinging fire and velocity of Terry Gibbs. Part two of this CDboth originally Prestige releasesis a Winchester-led session called Lem's Beat (1960), where Nelson served as a featured sideman."