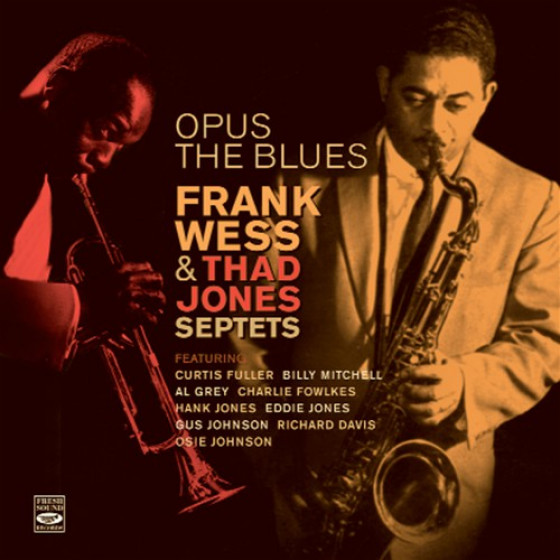 Frank Wess is among the more assured and accomplished of all jazz flautists and one of the most authoritative tenor saxophonists from the great Count Basie band of the Fifties.

In the 1959 Savoy session here he fronts his own septet with his Basie teammate, trumpeter Thad Jones, who wrote most of the compositions on the date, by his side. Idiomatically it is typical of the various Basie-type small group albums of the time, with beautifully relaxed and swinging ensembles and plenty of well-ordered room for a roster of excellent front line soloists. Hank Jones contributes some gem-like solos in a rocksolid
rhythm section completed by bassist Eddie Jones and drummer Gus Johnson and the overall feeling is an unalloyed joy.

The second septet date of this CDrecorded in 1960 for the Roulette labelis another pocket edition of the Basie bandleader Thad Jones, Wess, tenor saxophonist Billy Mitchell, and trombonist Al Greywith the exception of the rhythm section, again under the guidance of Thads young brother, pianist Hank Jones, assisted this time by Richard Davis, bass and Osie Johnson, drums. The tunes, composed by Thad Jones, and the arrangements reflect a progressive and consistent mainstream jazz approach. Wess impresses on flute, and in both tenor and alto, while Billy Mitchell and Al Grey are consistency personified on a date replete with that warm, moving feeling that characterized the Basie band.

Tracks #6-8, from the album
The Birdland Story (Roulette SRB-2)

"The Frank Wess date Opus De Blues was recorded in 1959 but remained unissued, somehow, until 1991. The Thad Jones tracks were originally part of an unwieldy two-LP set called The Birdland Story, so the packaging of these two slightly out-of-the-way sessions is again good thinking, especially as seven of the nine tracks are Jones originals.

The first session features fellow Basie hand Charlie Fowlkes on baritone sax and Curtis Fuller on trombone, with Hank Jones heading a three-piece rhythm section that manages the right swing feel while adding a few modern flourishes. Hanks soloing is particularly tasty and his sense of humor is in evidence, the sly quote of Star Eyes at the beginning of his solo on Boop De Doop a noteworthy example. Though hes listed as playing tenor and flute, Wess also plays alto on the opening I Hear Ya Talkin.

On the Birdland date (not sure what the reasoning behind that title was, since it was mostly a collection of unrelated studio sessions), our two protagonists are joined by Al Grey and Billy Mitchell. Is the cast sounding familiar yet? They certainly sound familiar to one another, making Thads charts sound as easy to play as they are to listen to, which is easy indeed! Brother Hank returns with more great piano comping and soloing and we get another rare chance to hear Wess alto, on Friday the 13th. Fans of his fine flute work and fluid tenor will find lots to like throughout the two sessions as well, of course.

Opus De Blues is certainly a worthwhile addition to any collection but the Carter/Basie collaborations rank among the very greatest postwar big band records. Youll like the former and you need the latter."

"There was a great tradition of small swing combos in the late 1930s, remarkable for the standard of their musicianship and the relaxed ease they brought to the recording studio. Came the bebop revolution. Came the revival of the New Orleans tradition. Then as if none of that had happened bands like these two exceptionally fine septets carried the small-band swing banner forward, speaking the same jumping, melodic, effortless language preached a world war before by people like John Kirby and by Dorseys Clambake Seven and Shaws Gramercy Five.

Like the latter two, the Wess and Jones septets were largely drawn from one of the great big bands: Basie followers will instantly recognise these artists, playing here while Basies and other jazz orchestras were struggling to survive. Whats significant to me is that these musicians were faithful to a style which was deceptive in its simplicity and which they honoured with fine instrumental techniques and with well-rounded experience. Frank Wess, for example, had studied flute in Washington with the National Symphony Orchestras soloist and held a degree in music; Thad Jones, who like Wess was an accomplished arranger, was also a prolific writer of neat melodies and provided seven of the nine tunes played on these dates.

There are moments of real inspiration in the free-flowing solos by all of the front-line men bursts of fire from Joness trumpet and some driving tenor by Wess, although hes better remembered for his flute. The rhythm sections lightly skipping elegance was inspired from the Jones brothers keyboard and the ensembles mesh with well-oiled precision. From the 12-bar construction of I Hear Ya to the crisp articulation of Friday (when Wess reverts to alto, the instrument he first picked up at the age of 10) a seductive feeling of joy hangs around this music."