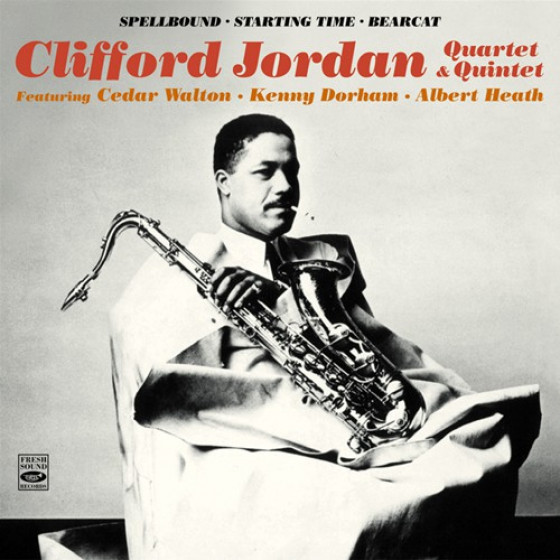 Tenor saxophonist Clifford Jordans first recorded appearance in 1957, showed his heavy indebtedness to Sonny Rollins. After that, though his style integrated elements of Coltranes approach, in these early 60s recordings, Rollins continued to be his dominant influence, except when its everpresent shadow shifts into the background and Jordan goes for himself.

These quartet and quintet sessions revealed him as a passionate player with a hardedged tone and a no-nonsense approach, and as an able writer. On Spellbound, the rhythm section, spurred by Albert Heaths crisp drumming, fuses into a tight Miles Davis type of unit, providing Jordan with just the driving support that his style demands. Starting Time is another stirring set, a quintet with Kenny Dorham and Cedar Walton, both equally fluent and expressive, and with Heath adding to it his implacable timekeeping, control and intelligence.

Similarly, on Bearcat, Jordan plays with authority and conviction, while Walton, Smith and Moses perform flawlessly in a swinging session, pulsating with the urgency of upbeat and exciting exchanges.

"Tenor saxophonist Clifford Jordan was sponsored by Cannonball Adderley on this set for Riverside, reissued on CD under the OJC imprint. At this point, Jordan did not quite have the distinctive sound that he would develop in his period with Charles Mingus, but he was already a strong hard bop stylist. Assisted by pianist Cedar Walton, bassist Spanky DeBrest, and drummer Albert "Tootie" Heath, Jordan performs four originals ("Toy" is best known), an unusual waltz version of "Lush Life," the ballad "Last Night When We Were Young," and the romping Charlie Parker blues "Au Privave." It's an excellent straight-ahead outing."

"Reissued in the Original Jazz Classics but thus far just as an LP, this fine set matches together the already distinctive tenor of Clifford Jordan with veteran trumpeter Kenny Dorham, pianist Cedar Walton, bassist Wilbur Ware and drummer Albert "Tootie" Heath. Other than Duke Ellington's "Don't You Know I Care," the group sticks to originals by Jordan, Dorham and Walton. The music is straight-ahead, and although the tunes are pretty obscure, the solos and high musicianship uplift the music. Recommended to straight-ahead jazz collectors."