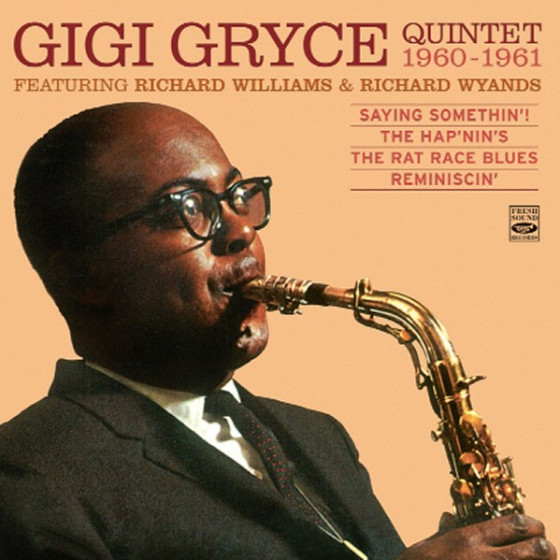 Like so many talented musicians, Gigi Gryce (1925-1983) got less out of his jazz career than he deserved. A fine, astringent altoist inspired by, among others, Charlie Parker, but without Birds all-consuming flame or facility, he was also an inventive composer and arranger, which coloured both the groups he led and his work as a soloist. Its all abundantly evident on the four well-crafted, highly accessible albums collected here, the last he made as leader.

His feeling for the blues and imaginative approach to the form invigorates the albums Saying Somethin! and The Rat Race Blues. But he could also take a fresh slant on well known material, as he does with the standards on The Hapnins (which also features his most famous compositions, Nicas Tempo and Minority) and with the Ellington bands staples, Caravan and Take The A Train, and Dizzy Gillespies A Night In Tunisia on Reminiscin. And he got a sparkling response from the capable group he led, which included Richard Williams, Richard Wyands, Mickey Roker and Eddie Costa.

Personnel on "The Hap'nins:
Same personnel except Julian Euell, bass, replaces Reggie Workman.
Recorded at Englewood Cliffs, NJ, on May 3, 1960

Altoist Gigi Gryce's last regular group before moving to Africa and largely retiring from music was the quintet featured on this CD [...] Gryce's alto matched well with Richard Williams's impressive trumpet and, with fine support from pianist Richard Wyands, bassist Reggie Workman and drummer Mickey Roker, the two horns explore mostly blues-based originals by Gryce, Curtis Fuller and Hank Jones. There is more variety than expected and the contrast between Gryce's lyricism and the extroverted nature of Williams's solos make this set fairly memorable.

Altoist Gigi Gryce leads his promising 1960 quintet on this CD reissue. Trumpeter Richard Williams and pianist Richard Wyands take fine solos on the six jazz standards (two of which, "Minority" and "Nica's Tempo," were Gryce's best-known tunes) while bassist Julian Euell and drummer Mickey Roker are fine in support. The hard bop set has its strong moments even this group was largely forgotten after Gryce's retirement. Worth investigating.

Altoist Gigi Gryce's next to last album before permanently dropping out of jazz has been reissued on this CD. With trumpeter Richard Williams, pianist Richard Wyands, bassist Julian Euell, and drummer Mickey Roker also part of what was a working quintet, Gryce (underrated as a soloist and a particularly strong composer) had one of his finest bands. The group swings its way through two of Gryce's lesser-known originals and three then-recent obscurities. Interesting and generally fresh straight-ahead jazz.

All three by Scott Yanow -All Music Guide