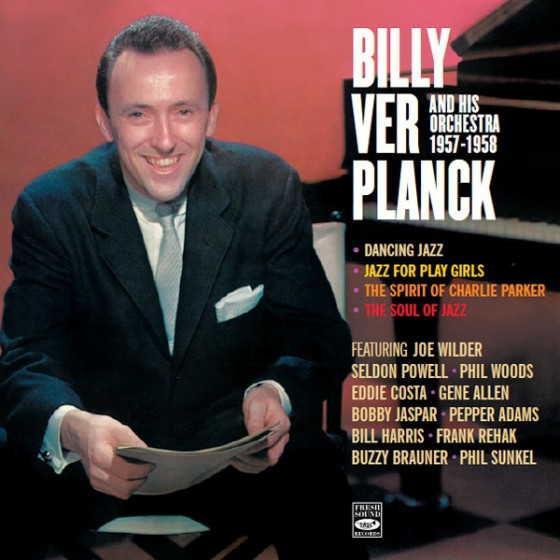 Trombonist Billy Ver Planck (1930-2009) wrote for all the big bands of his generation and was among the busiest studio arrangers/conductors on the New York scene. This CD set contains his only albums as leader, recorded in 1957-1958. His debut album Dancing Jazz, produced a scored jazz date for a nonet that combined the dancing sound and rhythm of the big band with the freedom of expression in solos available to the improvising combo, while Jazz for Play Girls took a modern-sounding group through an effective string of Basieinfluenced arrangements. On both albums the solos stand on their own merit; Wilder is tasteful throughout, Woods strong and assertive, and Harris, idiosyncratically imaginative, is best of all.

A mood album, The Spirit of Charlie Parker, slightly alters course, with three flutes (Wess, Jaspar and Powell), one trombone (Rehak), and a rhythm section with the dazzling Eddie Costa on piano and vibes to record four great Bird tunes. The Soul of Jazz, finds Ver Planck in a collection of songs old and new from the Gospel idiom—the final track excluded—delivered by a group of top-ranking jazzmen who “preach” their Jazz gospel. Pepper Adams is fierily effective throughout, and all involved cover the jazz spectrum from late swing to neo-modern period, depending on their stylistic allegiances.

"Most NJJS members are familiar with the name Billy Ver Planck as the husband of vocalist Marlene Ver Planck. In fact, he was a fabulous arranger who had started his career by playing trombone on the bands of Claude Thornhill, Tommy Dorsey and Charlie Spivak, among others. Ultimately he concentrated on the arranging side of his talent, and that also included his considerable talent for composing original melodies.

In the 1950s he had an association with Savoy Records. It was there that he made a series of four albums for the label, and they were the only ones that were ever released with his name as leader. These albums are compiled on Billy Ver Planck and His Orchestra 1957-1958 (FSRCD 934), and it contains a treasure trove of superb arrangements played by some of the top cats on the scene at the time like trumpeters Joe Wilder, Bernie Glow, Phil Sunkel and Clyde Reasinger; trombonists Bill Harris and Frank Rehak; reedmen Phil Woods, Seldon Powell, Gene Allen, Frank Wess, Bobby Jaspar and Pepper Adams; pianist/vibist Eddie Costa; bassists Wendell Marshall and George Duvivier; and drummers Bobby Donaldson, Gus Johnson and Art Taylor.

The albums were titled Dancing Jazz, Jazz for Play Girls, The Spirit of Charlie Parker and The Soul of Jazz. The groups varied in size from a nonet on the first two to a septet on the latter two. Much of the music on all but The Spirit of Charlie Parker, which contained four compositions by Parker,was composed by VerPlanck. All of the arrangements are by Ver Planck, they are swinging and inventive, and made the groups sound like larger ensembles than they actually were. It is nice to have this material gathered onto a two-CD set that enables listeners to revisit these wonderful sounds, or more likely, to introduce some special sounds to a new audience."

"If it was a personal matter I’d give this six stars. When I first heard these tracks more than half a century ago I was inspired to get in touch with the very amiable and talented Mr VerPlanck and we had many enjoyable phone conversations. Billy, even more so than I, was a Bill Harris nut and here he built a temple to his idol. He also wails out a very passable attempt at replicating him on Duh-Udah (Billy’s only fault was his love of silly titles). Sadly, you won’t find any reference to Billy in the encyclopedias. He was married to the equally delightful Marlene who to this day remains one of the best singers in the business.

There are inspiring and early performances from Wilder, Woods, Costa and Adams and, when he couldn’t get Bill, Billy used the greatest of the unsung trombonists, Frank Rehak, who hands out lessons on 10 of these tracks. Needless to say this is essential for Harris fans. The great man, who’s playing influenced every jazz trombonist from the 40s on, had just returned to Herman from a self-inflicted exile in Florida. He had entered the second stage of his playing - less robust but endlessly twitchy. VerPlanck made sure that he was heavily featured but still left plenty of space for his other giants to solo.

Billy wrote the non-standards although, as was his wont, producer Ozzie Cadena slaps his name on seven of them. They’re good, clean and functional and the idea of scoring Bird’s Mood solo for three flutes was most imaginative (Rehak’s good here). This was some of Powell’s and Jaspar’s earliest work and they both play with great fire, as does the young Pepper Adams. Winds is an attractive gently swung Ill Winds. I still don’t know how Billy managed to assemble such great bands. Now go away and let me listen to it all again."