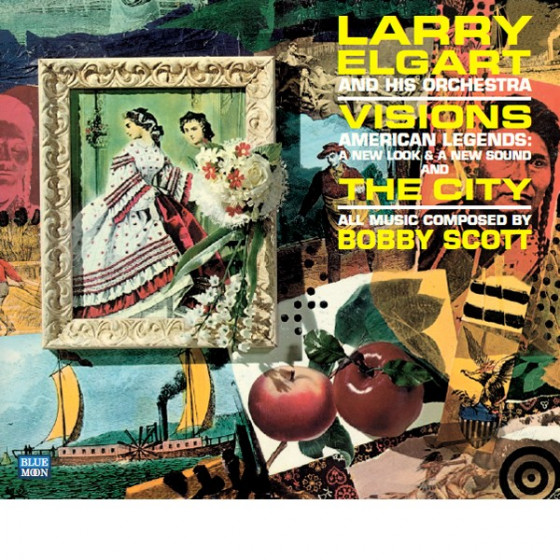 
It is not immodest to report that Visions! American Legends: A New Look and A New Sound is a quite remarkable album,” wrote the famed critic Dom Cerulli in his notes for this 1961 release by Larry Elgart and his orchestra and Bobby Scott, one of the brightest young composers in modern American music. All of the material is original, drawing on the composer’s acquaintance with American musical, and features Elgart on soprano sax, with some punching piano by Scott. It is music with a wide range of emotional response, and with a variety of tempos and moods.

Also in 1961, the prolific Scott wrote The City, yet another superb score. Again Cerulli responded enthusiastically, describing The City as “a constantly shifting kaleidoscope of impressions. It’s a being you feel with all your senses”, and adding that “The City, of course, is New York.”

Elgart’s orchestra performed this new, challenging work with skill and a distinctive, stylish, sophisticated sound, featuring the leader’s superb alto and soprano saxophones. With Larry and Grace Elgart keenly aware of sound reproduction realism and closely supervising the recording process, the results highlight remarkably the personality and sound of each instrument.

"Saxophonist Larry Elgart's orchestra and the young composer-arranger Bobby Scott were well met at the start of the 1960s when these two albums were made. The tracks, all Scott compositions, are brief, programmatic, and often loud. Scott, perhaps keen to invest inflexible charts with what approximated to contemporary jazz feeling, never wastes an opportunity to let the brass rip.

Despite the rafter-rattling, he also keeps it at bay, providing the leader and the rest of the woodwind section with time to weave silky if short-measured fabric. This is true on the Visions! album of Elgart's limpid sax in Hill Song, Vermont Foothills, and Many Leaves. But though Scott justifies the screaming brass in these numbers in terms of storytelling (its depiction of a “militant” winter, a high mountain, and a burgeoning spring), it works best in tunes with a jazz source, as in the 12/8 against common time of the gospel-inspired For The Soul.

The City is a steely urban-scape with mellow interludes and exhibits a feeling that the jazz has come in from the fresh air and is more at home, even on slower numbers such as Quiet Harbour, and busier ones (The Village). The bass gets going, the vibraphone comes to life, and everyone loosens up a tad; even the ever-lurking harp is at the party.

There are no full personnel listing, and nothing resembling an improvised solo. A few musicians are mentioned in the original liner notes. For sure, all eyes were on the band parts."

LARRY ELGART
The neatly-bearded saxophonist/leader was born in New London, Conn. Early musical experience included a stint with Charlie Spivak’s orchestra as lead alto player. With his brother, trumpeter Les Elgart, Larry formed an orchestra in the early 1950s; later took over the band when Les went to California. He is a superb alto and soprano saxophonist with a clear, personal sound on each instrument. Keenly aware of sound reproduction realism, even before the advent of hi-fi, Larry and Grace Elgart supervised closely every step of the recording process at their sessions.

BOBBY SCOTT
A tall, lean, on-the-go native New Yorker, Bobby Scott at the age of 26 indicates unlimited possibilities as a composer, jazz pianist, and popular singer. He studied at Lafayette School of Music, and with Edvard Moritz. While still in his teens he was playing jazz piano with such groups as those led by Louis Prima, Tony Scott, and Gene Krupa. He has worked with his own jazz trio, has recorded as a pop singer and jazz pianist, and has written music ranging from big band jazz to serious contemporary works. His earlier collaboration with Larry Elgart and his orchestra was Visions, American legends and history interpreted in brilliant musical compositions.