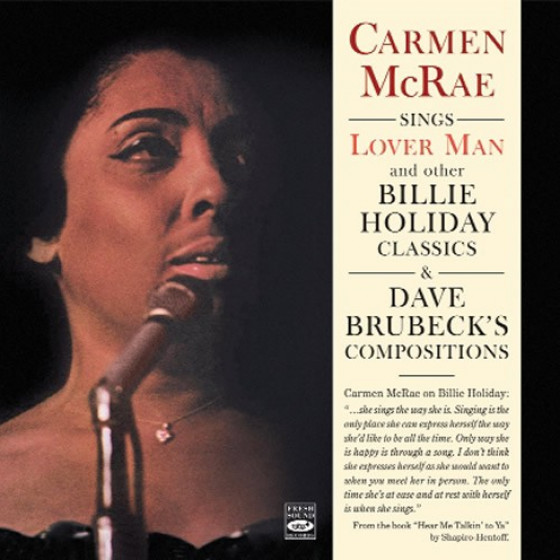 When Carmen McRae (1920-1994) made the splendid Sings Lover Man and other Billie Holiday Classics in 1961 it was a heartfelt tribute to her main influence.

By then she was a mature, confident stylist, sufficiently secure in her own musical identity not to be intimidated by her great idol. Few singers could dare to take on Strange Fruitespecially accompanied only by guitar or risk echoing Lady Days approach on songs like Travlin Light and Them There Eyes, and emerge not merely unscathed, but with her reputation enhanced. She gets wonderful support from Nat Adderley, Lockjaw Davis and Mundell Lowe, while Norman Simmons contributes brilliantly as pianist and arranger. Amid striking performances other standouts include God Bless The Child, Yesterdays and My Man.

In the Shapiro-Hentoff famous book 'Hear Me Talkin to Ya,' Carmen McRae talks of Billie Holiday. She speaks of the late vocalist with sympathetic insight. In one passage, while ostensibly speaking of Billie Holiday, she is actually summarizing the essence of Carmen McRae: ... she sings the way she is. Singing is the only place she can express herself the way she'd like to be all the time. Only way she is happy is through a song. I don't think she expresses herself as she would want to when you meet her in person. The only time she's at ease and at rest with herself is when she sings.

Miss McRae also worked several times with Dave Brubeck, whose quartet with Paul Desmond was then at the height of its popularity. Collected here are some rare examples of their collaborations, all from 1961. Desmond appears on only oneTake Five, naturallyand almost all the repertoire is originals which Brubeck and his wife, Iola, composed for various projects. It includes two of Brubecks best known songs, Strange Meadowlark and Its a Raggy Waltz, and one track features no less than Louis Armstrong.

Track #25, not on the original album configurations

Carmen McRae sings in all tracks

Tracks #13 & 14 were recorded during the above sessions, but are not related to Billie Holiday.