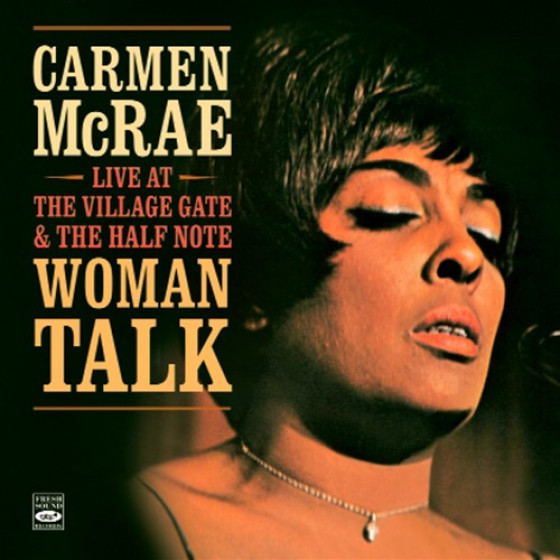 A receptive audience always helped Carmen McRae feel at home. The smaller the club, the better. Theres a chance for coldness in big places. Her disciplined approach, precise intonation, perceptive grasp of the lyrics, and her superb devotion to the beat, are all vitally present in these live performances.

Her style was completely musical. She became a rare vocal star in the jazz scene with a strongly individual style, singing with an easy command of intervals and phrasing that sounded as if she were delicately playing a horn. And she chose her songs with care, assembling them with a keen sense of contrast and changes of tempo, so that everything combined to communicate the mood and story of the song. This is Carmen McRae performing at the height of her considerable powers. With so much beat, and so much feeling!

Carmen McRae, sings in all tracks

"This album captures the best of Carmen McRae's performances at a monthlong appearance at New York's Village Gate jazz club in November 1965. At the top of her form and employing her usual laid-back manner with lots of well-placed space between words and phrases, McRae delivers on a set of those songs that have a touch of irony she seemed to favor as her career and voice matured, with tunes by Leslie Bricusse and Anthony Newley getting the heaviest play. On "Don't Explain," the irony is so powerful that her voice takes on a wounded quality. McRae made this song part of her program as often as she could to honor her mentor, Billie Holiday. Her ability to work behind the beat and her unique wordless vocalizing punctuate this album, being especially effective on "Sometimes I'm Happy," which she turns into a torch song. One of the album's high points is the a cappella opening to "Feeling Good," before the band drifts in with a Latin beat and Ray Beckenstein's flute carrying the instrumental load [...] All in all, a very satisfying set from a singer who is certainly close enough to be numbered among the vocal jazz elite."