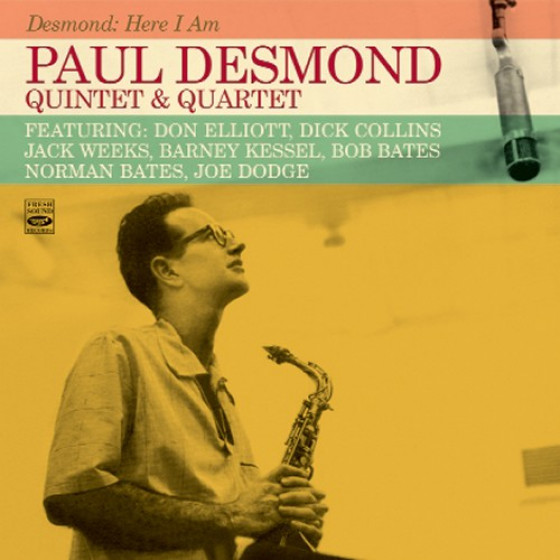 Paul Desmond recorded his first two albums as a leader in 1954 and 1956, and they emphasized what fans of the Dave Brubeck Quartet already knew: his lyrical alto saxophone work made him one of the great individualists in jazz. My name is Paul Desmond, he wrote in the notes of the first album, and here I am 30 years old and this is my first album in which I am not breathing down someone elses neck... Paul plays with considerable vitality in the first four tracks, with excellent arrangements by Dave Van Kriedt, who shines also as a soloist on tenor sax. In his off-beat notes, Paul wrote, Van Kriedt develops themes like some people develop pictures. On the second half of the record Desmond plays against six voices through a graceful set of arrangements, with guitarist Barney Kessel added to the rhythm section.

The music on the second album features Don Elliott on mellophone in a pianoless quartet that follows the soft-styled approach they both favored. Desmonds alto playing is relaxed and inventive in keeping with the delicate sound. He maintains even control through all the registers of the instrument, quite a remarkable feat in itself.

Note: This is the first time track #5, Warm Cradle, originally issued on the Fantasy LP3-21, has been released on CD.

"This release contains Desmonds first two record releases as a leader; a 10-inch from 1954 and a 12 from 1956 both originally on Fantasy Records. The first five tracks have the quintet reflecting the strong influence of the Gerry Mulligan quartet of the day and Jeruvian is dedicated to the baritone man. This is cool jazz personified with an extra sweetening of sugar from the leaders alto. He is though, an inventive, original stylist described by sleeve note writer Doug Ramsey as on the verge of becoming the most famous alto saxophonist since Charlie Parker. I wouldnt go that far or even close but he is a unique voice on the instrument.

The four following tracks have some fine solo work from Desmond and Kessel but the Bill Bates Singers are a distraction in my view, add nothing to the proceedings and lower the rating. Van Kreidels Misty Window has the first two bars of Easy To Remember and then he takes it off in a new direction. Interesting!

Best of all are the Desmond Quartet tracks that present some sturdy standards. Desmond produces a warm, bittersweet solo on Everything Happens and he is on good form on the others, particularly Line For Lyons, recalling the inevitable Mulligan connection once again. Elliott provides a nice contrast on trumpet or mellophonium. As for drummer Joe Chevrolet, he was moonlighting from his record company, motoring along and hoping to Dodge trouble. Sorry!"

"Desmond takes an emphatic step forward as a stylist here, even while giving featured co-billing to his brass sideman Don Elliott. Again, he chooses to omit the piano so as not to compete with his Brubeck recordings (Brubeck and Desmond had an informal agreement to that effect), and his musical imagination here doesn't really require a piano's harmonic support anyway. Desmond sounds much more confident and witty than at any time on his debut LP, knocking out a really great solo on his own "Jazzabelle" for starters, bowing to no outside style ogres. Desmond's other composition "Sacre Blues" is a clever takeoff from the first few notes of Stravinsky's "The Rite of Spring," with a walking bass counting off the beat; and the normally self-effacing saxophonist even goes way up high for one of the few times in his solo career. Elliott, who bailed out of jazz later to find success writing music for commercials, is a fine swinging player on trumpet and mellophone (moonlighting liner annotator Mort Sahl indicates four instruments but doesn't identify them), and Elliott and Desmond exchange many fine contrapuntal ideas. Norm Bates is on bass and "Joe Chevrolet" (Joe Dodge, of course) clicks swingingly on drums."

"Back when Ike was in the White House, the West Coast featured some of the most influential music not only in jazz, but in popular music. The Hollywood studios were brimming with jazzers who were supplementing their income by playing on TV shows like Leave it to Beaver [...]

Cool-toned alto saxist Paul Desmond made his name with Dave Brubecks band, but before that period of his life hes found here in Hollywood and San Francisco in a variety of swinging sessions. Hes with Dick Collins/tp, Dav Van Kriedt/ts, Bob Bates/b and Joe Dodge for a snappy session which is cleverly cool on Baroque but sizzles on Jeruvian. The next month he includes some background vocalists (which were in vogue at the time) along with Barney Kessel/g for some lithely MOR-ish pieces such as Garden in the Rain and Winky. Desmond bears down a bit more on the February 1956 session from SFO with Don Elliot/mel-tp, a non Psycho Norman Bates/b and Joe Dodge/dr on a snazzy Line For Lyons and Lets Get Away From It All. Desmond croons on You Go To My Head and Everything Happens to Me while the whole team is as sharp as the fins on a Caddy."