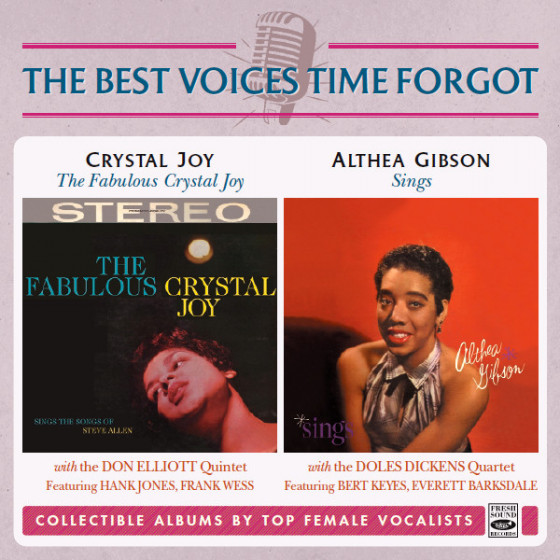 The Fabulous Crystal Joy
Crystal Joy was born in Montreal to Trinidadian parents. She began singing at an early age in Maine, and later learned to accompany herself on piano. When her family moved to Boston, she was offered the intermission gig at the Hi-Hat club, circa 1952. Crystal pursued her career with determination, working in the clubs of Miami, Boston and New York. In 1959 she came to the attention of Steve Allen, who invited her to sing on his television show. After appearing on Allen’s show, he offered her to record an entire album of his own songs. The result was THE FABULOUS CRYSTAL JOY. Her singing has a jazz feeling, with a voice that is true, lyrical and emotional, and a style that romps at uptempos while still showing smooth authority on ballads. Throughout the entire program, she pays special attention to the frequent mood changes of the material, and receives some intelligent support from Don Elliott’s  quintet. Their skill, coupled with Crystal’s sheer excellence, makes this an album that can be listened to again and again.

Althea Gibson Sings
Althea Gibson blazed a new trail in tennis, winning some of the sport’s biggest titles in the 1950s; later in her life, she broke racial barriers in professional golf as well. But in addition to a tennis champion and a source of inspiration, she was also a talented singer with a rich voice, who tried to jumpstart her career in 1958 with the album ALTHEA GIBSON SINGS and two television appearances on Ed Sullivan’s show. It wasn’t enough though, and she didn’t go any further in the world of music. Still, listening to her voice today, there is a distinctly tasteful sort of beat and phrasing that characterizes her singing style above everything else. The content of her songs is varied—sophisticated and torchy in Don’t Say No, full of pathos and tears in A Cottage For Sale, inspirational in So Much to Live For. But each number is sung with winning sincerity, and an impeccable sense of timing.

Personnel on "The Fabulous Crystal Joy":

"I have given up trying to figure out how Fresh Sound Records finds these obscure vocalists that are simply amazing. This last batch might be the best of all; no one is scraping the bottom of the barrel here. On the contrary!

At one time, Crystal Joy kept company with the likes of Monk, Coltrane and Diz, and this album teaming her with Don Elliott’s Quintet of Hank Jones/p, Trigger Alpert/b, Grady Tate/dr, Kenny Burrell/g and Frank Wess/fl show that she had the right feel for bop. Elliott plays mellophone and vibes for the 1959 session dedicated to Steve Allen compositions. Her husky voice works well on the exotic Latin lover of “We’re Together” and gets Broadway clear for “This Cold Be The Start of Something”. She’s dreamy with Elliott’s vibes on “Spring In Maine” with Burrell and Wess supporting the harmonies and slinks with them on a sensuous “The Best Time Of Day”. Smoke rings of sounds.

Althea Gibson sounds like she’s relaxing on a chaise lounge on this cozy 1959 session with Dole Dickens’ Quartet featuring guitarist Everett Barkdsale. Gibson is intimate with the guitarist on “September Song” and richly regretful during “A Cottage For Sale”. Hints of Sarah Vaughan are heard on the clear and confident “Don’t Say No” and the vulnerable “I Don’t Stand A Ghost Of A Chance” but she really sounds like herself throughout, getting peppy on “I Can’t Give You Anything But Love” or glowing ON “You’re My Everything”. Styling swing."