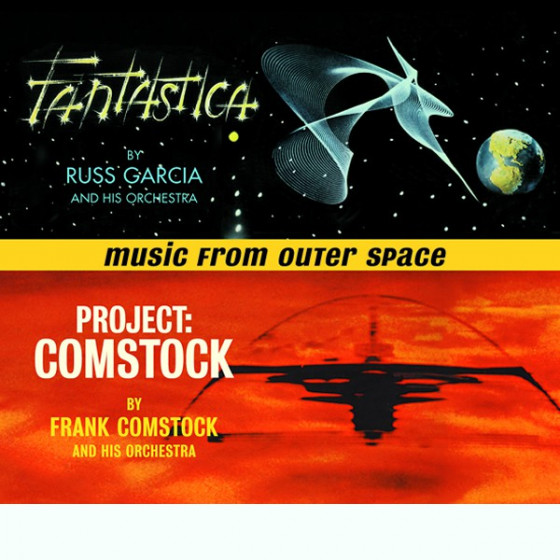 Reunited here on CD are the two masterpieces of “Music from Outer Space,” two legendary albums that bring you the music of whirling satellites, brilliant galaxies, streaming comets, mysterious planets, and the eerie reaches of space in-between, all in spectacular stereo sound.

“Fantastica” (1957) remains the gold standard by which all outer space exotica records are judged. It is an inno- vative musical suite of all outer space titles written by the imaginative composer/arranger Russ Garcia, who brilliantly orchestrated and conducted it using well-controlled unusual electronic effects. The effects were created by sound engineer Ted Keep, and include a sine wave generator that produces treble and bass tones of almost inhuman extremes. Russ Garcia hoped that his music would take listeners far, far from the earth... clear out of this world.

All that other-worldly, startling musical and dramatic life is also present in another remarkable album, “Project: Comstock” (1962). One of the world’s most inventive arrangers, Frank Comstock, outdid himself, as the subject of space gave him literally light years of latitude to create a new kind of music. In addition to the normal complement of his orchestra, Comstock augmented it with electronic instruments seldom heard in recordings such as the Theremin and Novachord in an unprecedented musical journey.

Enjoy this science-fiction music that will take you on a realistic trip into space.

Music from #1-12 composed by Russ Garcia

“Fantastica remains the gold standard by which all outer space exotica records are judged -- composed and conducted by Russ Garcia, the album is a marvel of sound and structure, brilliantly evoking the music of the cosmos via revolutionary studio techniques, cinematic arrangements, and innovative electronic elements. Created in tandem with Liberty Records' chief engineer, Ted Keep, Fantastica bears little resemblance to conventional earthly music -- alongside traditional instruments like woodwinds, harp, and percussion is a series of electronic devices and effects, including a sine wave generator that creates treble and bass tones of almost inhuman extremes. This is sound at its most deeply visual, conjuring horrific images of alien attack ("The Monsters of Jupiter"), natural disaster ("Nova"), and chilling isolation ("The Lost Souls of Saturn") that articulate the collective unconsciousness of humankind with clarity and poetry -- a Masterpiece.”

“Music from Outer Space brilliantly captures the wonder of an America poised on the brink of JFK's New Frontier. A marvel of sound and structure, the album evokes the music of the cosmos via revolutionary studio techniques, cinematic arrangements, and innovative electronic elements. Created in tandem with Paul Tanner (inventor of the electronic theremin) and electric violinist Elliott Fisher, Frank Comstock's arrangements subvert the very essence of conventional music. Traditional instruments coexist uneasily alongside electronic devices and effects to generate sound at its most deeply visual, conjuring both the vast beauty and ominous danger of the galaxy beyond earth's atmosphere.”

Both by Jason Ankeny -All Music Guide