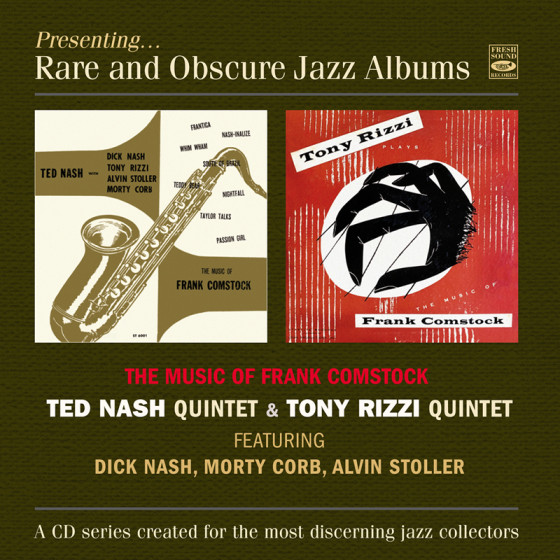 TED NASH's "The Music of Frank Comstock"
The incredible versatility of Ted Nash (1922-2011) spanned the entire range of reed instruments. A native of Boston, from a very young age he already showed that he had the potential to become a great flutist. However, he was so fascinated with the tenor of jazz notables like Ben Webster, Joe Thomas and Lester Young that he switched instruments at the age of 14. At just 18, he began to tour with a succession of dance bands. He joined Les Brown in 1944 and quickly became recognized as an instrumentalist of limitless range. Ted left the Brown group in 1946 to settle in Hollywood, where he combined recording dates, for Billy May or Jerry Gray, with the rest of his professional activity between film, radio and television. On this 1954 album for Starlite Records, Ted swaps from tenor to alto, flute and piccolo, to showcase composer-arranger Frank Comstock’s progressive music in divergent moods.

TONY RIZZI's "The Music of Frank Comstock"
Tony Rizzi (1923-1992) grew up in Los Angeles and studied violin for 11 years before taking up the trumpet. At 18, he began playing guitar and soon developed into a sideman of sufficient ability to qualify for the Air Transport Command band during World War II. After the invaluable experience of playing in service bands, Tony was ready to compete with the best. In 1946, his first professional jobs were with Boyd Raeburn’s and Earle Spencer’s progressive bands, performing and recording with distinction as a soloist. This earned him a contract with Les Brown, becoming a keymusician in his band until 1953. That same year he became a member of the Dave Pell Octet, one of the most popular jazz ensembles in Southern California, which was formed with the core members of Brown’s orchestra. Beginning in 1954, Tony expanded his activities by joining the staff of the NBC Orchestra, which played on many television variety shows. It was there that he met Frank Comstock, who would be responsible for the production and music of Tony’s first album as a leader for Starlite Records.

All compositions by Frank Comstock