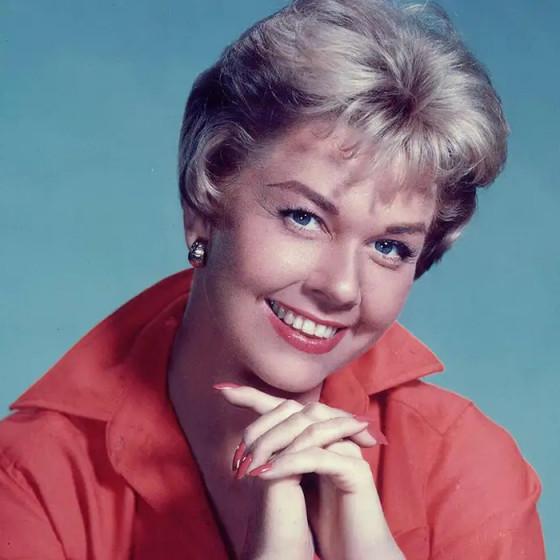 Doris Day packed four careers into one lifetime, two each in music and movies. The pity is that all most people remember are her movies, from Teacher's Pet (1957) onward, as the quintessential all-American girl, cast opposite such icons of masculinity as Clark Gable and Rock Hudson. She also transposed this following to television at the end of the '60s with a situation comedy that lasted into the early '70s. If most people remember her as a singer, it's usually for such pop hits as "Secret Love" and her Oscar-winning "Que Sera, Sera (Whatever Will Be, Will Be)," which became her signature tune.

But before all of that, from 1939 until the end of the '40s, Doris Day was one of the hottest, sultriest swing-band vocalists in music. That body of work -- which contains at least one unabashed, classic early-'40s recording, "Sentimental Journey" -- is one of the most impressive in the fields...

Doris Day packed four careers into one lifetime, two each in music and movies. The pity is that all most people remember are her movies, from Teacher's Pet (1957) onward, as the quintessential all-American girl, cast opposite such icons of masculinity as Clark Gable and Rock Hudson. She also transposed this following to television at the end of the '60s with a situation comedy that lasted into the early '70s. If most people remember her as a singer, it's usually for such pop hits as "Secret Love" and her Oscar-winning "Que Sera, Sera (Whatever Will Be, Will Be)," which became her signature tune.

But before all of that, from 1939 until the end of the '40s, Doris Day was one of the hottest, sultriest swing-band vocalists in music. That body of work -- which contains at least one unabashed, classic early-'40s recording, "Sentimental Journey" -- is one of the most impressive in the fields of swing and popular jazz, and deserves to be heard far more than it is. Moreover, before those late-'50s comedies, Day had a film career that included adaptations of Broadway musicals (The Pajama Game), classic thrillers (The Man Who Knew Too Much), and searing social drama (Storm Warning).

She was born Doris Mary Ann Kappelhoff on April 3, 1922, in Cincinnati, Ohio. Her father was a music teacher, choir master, and church organist. Her mother loved popular music, especially (surprisingly) country music. Her parents divorced when she was 12, and Day lived with her mother and older brother in College Hill, Ohio. From age six, she had taken dancing lessons, and that was the career she ultimately intended to pursue. In 1937, when she was 13, she and a young male partner won a $500 prize in an amateur dance contest. The family decided to pursue stardom in Hollywood for their young child. Her hopes for a career in dance were shattered on the trip out West in an automobile accident that severely injured her right leg.

Her recuperation, living above the Cincinnati tavern owned by an uncle, gave the young teenager access to a jukebox that played the hits of the day; and by the time she was 14, she had developed a taste for swing stars such as Benny Goodman and the Dorsey Brothers, among numerous other bands. She also started singing along with Ella Fitzgerald's records and tried to develop her own style. Music became a new aspiration, and the timely intervention of voice coach Grace Raine helped her develop the approach to song that was to characterize her career. Raine arranged for Doris to appear on the Cincinnati radio station WLW on an amateur showcase; the song that she sang was Howard Dietz and Arthur Schwartz's "Day After Day," from 1932, which earned her a featured spot on the station.

She was still known as Doris Kappelhoff when she got a job singing at a local club, but when a chance for radio broadcasts from the club was brought up. She ultimately took the name Doris Day, owing to the popularity of "Day After Day," and while the gig didn't last, the name did. In 1939, however, she was told of an opening for a vocalist in the band of Bob Crosby, Bing's brother and a star bandleader in his own right. Day auditioned and got the job at age 17. She stayed with Crosby's band for three months before she was approached by bandleader Les Brown. This was 1940, and the musical world was dominated by the big bands, jazz-influenced swing outfits that gave singers like Sinatra (who was just getting rolling himself as a star vocalist) extraordinary opportunities to interpret the songs of the day. Tin Pan Alley still ruled the airwaves (though country and, to a lesser degree, blues were making inroads), and there was no shortage of great songs. In the middle of all that was this little 17-year-old girl, who could impart a feeling of world-weary sensuality or sensual innocence to a song, shading her voice in textures almost too delicate to analyze. And Doris Day became a budding star, in an era in which Bing Crosby and Frank Sinatra -- not to mention Ella Fitzgerald -- were just a few of the vocalists competing for public attention.

While singing with Bob Crosby's band, she first worked with many of the sidemen -- Bob Haggart, William Stegmeyer, Billy Butterfield, and Zeke Zarchy -- who would later work on her own recording sessions. It was with Les Brown's band, however, that the public first got to hear her voice and know her name, initially on the radio and then on Brown's recordings. From 1940 until 1946, with a two-year break for an unhappy marriage, Day was a star vocalist, most notably on hits like "Sentimental Journey" and "My Dreams Are Getting Better All the Time," both of which were monster hits for the band. "Sentimental Journey" also became especially popular among American soldiers stationed overseas during World War II. By the end of the war and her time with Les Brown, when she was barely into her twenties, Day was considered one of the top band vocalists in the world. Apart from having a beautiful voice and command of its every shading, Day's success was based on her approach to songs and audiences. When she sang, she sounded as though she were singing not to a crowd or a mass "audience," but to each individual listener. Her records and her performances resonated for listeners personally, and coupled with the considerable merits of her voice and the quality of Brown's band, it made her a huge favorite with almost anyone who heard her.

Her tenure with the band was interrupted by another unsuccessful marriage, and when it ended, Day -- with a young son named Terry from her first marriage to provide for -- was ready to return to Cincinnati and forget about music. So the story goes, her agent persuaded her to attend a party in Hollywood where she impressed songwriters Jule Styne and Sammy Cahn with an impromptu performance of "Embraceable You." They were writing the score for a Warner Bros. movie called Romance on the High Seas, which had been planned for several leading ladies, all of whom fell out of the running for one reason or another. Sammy Cahn got Day and her agent down to the studio, and she auditioned before director Michael Curtiz, who ordered a screen test for her. Day's screen test was run for the studio executives alongside two actresses whom they'd previously asked to audition, and she won the role.

The movie was a hit, and Day became a star, not in the perky, virginal persona that people remember today, but as a top-flight singer and actress. After that, Day's two careers went along in tandem, as she starred in movies and often turned their songs into hits. She also appeared in non-musical films, and revealed herself a superb dramatic actress in the groundbreaking topical dramatic thriller Storm Warning (1950), in which she played the victimized wife of a boorish, murderous Ku Klux Klan member (Steve Cochran), but she could also play perky tomboyish parts in movies like On Moonlight Bay (1951).

Day resumed her recording career in 1947, and even amid the growing number of ballads in her output, her early solo sides remained very jazzy, and are among her best recordings. Her music softened somewhat as the '40s wore on, although she did record some superb jazz-style sides for the 1950 movie Young Man with a Horn. But her most visible sides from the '50s onward were pop songs. She had huge hits with "Secret Love," a song derived from the movie Calamity Jane (1953), and "Que Sera, Sera (Whatever Will Be, Will Be)," which she'd sung in the Alfred Hitchcock thriller The Man Who Knew Too Much (1956), in which she co-starred with James Stewart. During the '50s, Day was the most popular and one of the highest paid singers in America, and the sudden burst of popularity of her movies, beginning with Teacher's Pet (1958), only added to her overall impact on the country's popular culture, though the movies ultimately eclipsed her music career. In the midst of her pop music/movie career, Day recorded an entire album of jazz with André Previn as her accompanist, entitled Duet. Its impact was muted by the popularity of her movies, which by the early '60s had turned her into a cultural icon, her wholesome innocence the perfect non-threatening match for Marilyn Monroe's innocent sexuality.

The growth of rock music as the dominant force in popular music in the mid-'60s left Day on the musical sidelines; ironically, her son Terry Melcher became one of the most successful rock producers of the period, most notably in association with the Byrds' early work and Paul Revere & the Raiders. Day's personal and professional life took a bad turn in the wake of the death of her third husband, Marty Melcher, in 1968. Melcher had managed her business affairs for 17 years, and she learned after his death that he had lost or embezzled her entire career's earnings. Day was left broke, and the ensuing stresses led her to a nervous breakdown. Her recovery began later in 1968, when she began work on her CBS network situation comedy. Melcher had committed her to doing the show immediately prior to his death, without her consent, but the program was a success and Day was restored to solvency during the series' five-year run. (A year after the program ended, she was finally awarded a $22 million judgment against her former attorney for his role in Melcher's handling of her finances.)

After the cancellation of the CBS series in 1973, she focused most of her energy on the Doris Day Animal Foundation, although she did a cable television series in the mid-'80s titled Doris Day and Friends. In 1994, she released The Love Album, including unissued songs recorded in 1967. In 2011, My Heart gathered tracks from sessions she did in the '80s (including four co-written by her son Terry Melcher with the Beach Boys' Bruce Johnston), plus four vintage tracks released between 1951 and 1994. In May 2019, her foundation announced that Doris Day had died after a short bout with pneumonia; she was 97.