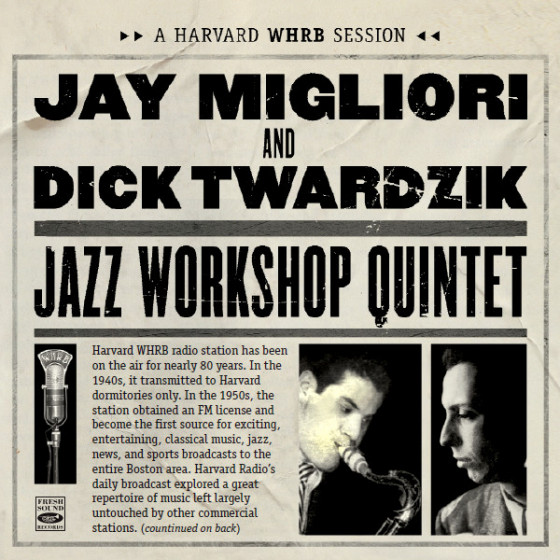 Harvard WHRB radio station has been on the air for nearly 80 years. In the 1940s, it transmitted to Harvard dormitories only. In the 1950s, the station obtained an FM license and become the first source for exciting, entertaining, classical music, jazz, news, and sports broadcasts to the entire Boston area. Harvard Radio’s daily broadcast explored a great repertoire of music left largely untouched by other commercial stations.

By 1952, Boston was experiencing a renaissance in jazz led by such local modernists as Charlie Mariano, Jaki Byard, Joe Gordon, Nat Pierce, Herb Pomeroy, and Serge Chaloff, as well as talented newcomers like tenor saxophonist Jay Migliori (1930-2001), one of the most active young jazzmen on the scene. In the spring of 1954, after having played with Charlie Parker at the Hi-Hat club and in Chaloff’s sextet at the Storyville, Migliori joined forces with his friend pianist Dick Twardzik (1931-1955)—a young prodigy who had already recorded with Charlie Mariano and been praised by Bird—to organize a quintet that would play at the Jazz Workshop Stable. With them were three younger modernists, by the name of Johnny Rae, vibes, Jack Carter, bass, and Bob Atcheson, drums.

The Stable was jumping with its newly established jazz policy, and most of the best local jazz was going through its stage with the fervent support of Boston jazz fans. By the time spring was turning to summer, Harvard’s radio station WHRB offered to record the Migliori-Twardzik quintet. The result was this exciting session we are releasing here for the first time.

"Dick Twardzik (1931-55) was a potentially brilliant bop-based pianist who died at the age of 24 from a heroin overdose. He is perhaps best known for touring with Chet Baker in Europe during his last period but he also worked some engagements with Charlie Parker in 1952, played and recorded with Serge Chaloff, Charlie Mariano and Lars Gullin, and led two sessions of his own.

While the main appeal of this previously unreleased performance at a radio station in May 1954 will be Twardzik's participation, the quintet actually includes more solo space for the excellent tenor-saxophonist Jay Migliori and vibraphonist Johnny Rae who are joined by bassist Jack Carter and drummer Bob Atcheson. The highlights of the boppish set, which is well recorded, include two versions apiece of Terry Gibbs' "Fatty," and "Get Happy" plus a piano feature on "'Round Midnight." The final incomplete "Blues" has Ray Santisi on piano and, as a bonus, there is a synthesized version of Twardzik's original "Bouncin' With Bartok" which he never recorded.

Valuable as this CD is historically, fortunately its musical value is also high and the results are enjoyable, making it a must for 1950s bop collectors."

"Jay Migliori and Dick Twardzik were part of a vibrant jazz community in Boston during the early 50s which included Serge Chaloff, Joe Gordon, Charlie Mariano and Jacki Byard.

At the time of this recording Migliori was dividing his time between the Berklee School of Music and the Storyville club where Chaloff was the leader of the house-band. Twardzik was studying with Serge’s mother, the celebrated Madame Margaret, who was a professor at the New England Conservatory. He also played at Boston’s Hi Hat occasionally with Charlie Parker who considered him to be a genius.

This previously unissued material is an important addition to the pianist’s sadly slim discography. It was recorded four months before his celebrated contribution to Chaloff’s Fable Of Mabel which was followed a month later by his seminal Last Set album – his only date as a leader.

The tenor man went on to spend most of the 50s with Woody Herman and much later he became a charter member of Med Flory’s Supersax. His Lester Young-like sound by way of Bill Perkins makes a strong impression here, especially on uptempo numbers like Get Happy and Ryan’s Love.

Dick Twardzik, who died a year after this date in a lonely Parisian hotel room, was already one of the music’s most original and distinctive pianists with his own unique time-feel complete with voicings that occasionally reflected modern classical composers such as Erik Satie and Béla Bartók.

Jordi Pujol has added a brief segment of Twardzik’s Bouncin’ With Bartok as a bonus, here performed by his friend Bob Freedman. He composed it at the age of 17 but it has never been recorded in its complete form."

"This ultra rare 1954 recording of a radio broadcast captures the Boston jazz scene during its halcyon days. Here, two giants of the swing to bop era were caught recorded at the Harvard radio station, namely tenor saxist Jay Migliori (who made his name with Woody Herman) and pianist Dick Twardzik (mostly associated with Chet Baker). They are joined by Johnny Rae/vib, Jack Carter/b and Bob Atcheson/dr (except for the incomplete take of “Blues), and deliver vintage bebop material. Athceson’s drumming lead into a “Night In Tunisia”-inspired take of “Chanticleer” while Migliori’s Getz-inspired tenor sax is totally hip on “Fatty”. The rhythm team has fun with the two stepper “Ryan’s Love” and the vibes team with the ride cymbal for a sizzling “Get Happy”. Twardzik is in rich form for a solo rendition of a deep and shadowed “'Round Midnight” and while the recording is a bit primitive, the playing is timeless. As delicious as a pizza on Hanover Street."