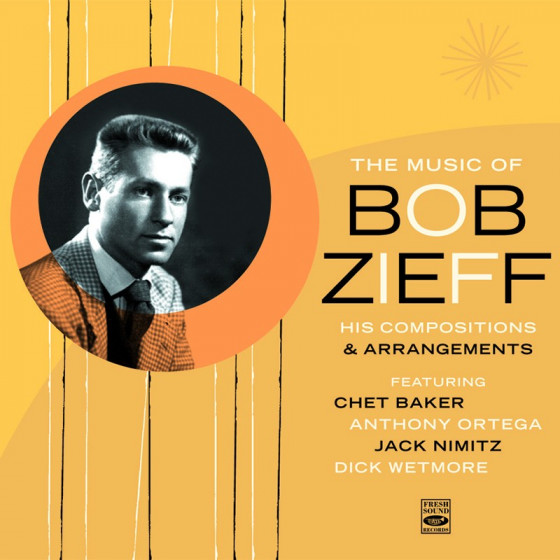 Bob Zieff was born June 4th, 1927, in Lynn, Massachussetts, about 9 miles north of Boston University, where he studied harmony, composition and musicology. In 1953, at the request of modern violinist Dick Wetmore, he composed an eight-section suite, full of open spaces for improvisation. The stimulating compositions Zieff wrote were built of fresh, intriguing lines, interesting harmonic routes, and a sense for the whole rather than a succession of parts. His challenging charts were happily recorded by Wetmore’s quartet for Bethlehem, but the label didn't release them until two years later on a 10-inch album. Unfortunately Dick Wetmore did not have much commercial appeal, and despite the good reception of the music, Zieff’s compositional style was far too complex for the American market. Compounding the matter, 10-inch records were being rapidly replaced by the new 12-inch vinyls, and so the release was a flop.

Zieff’s imaginative writing and individual musical mind attracted his friend pianist Dick Twardzik, who asked Bob to give him private lessons in composition. When in 1955 Dick went with Chet Baker’s quartet to Europe, he took with him several of Zieff tunes. Most of them were recorded by the trumpeter in Paris, and back in the U.S. Chet introduced a couple of Zieff’s tunes to the repertoire of his new crew. About them, jazz authority Nat Hentoff said in 1956: “Zieff is a writer from whom more should be heard.”

Keeping Hentoff’s suggestion to heart, Fresh Sound has put together, sixty years later, this 2-CD set including all available recordings of his finest compositions and arrangements, featuring in some cases unusual instrumentations. This intriguing portrait of Bob Zieff’s music is highly complemented by a fascinating essay written by the composer himself.

All tracks written by Bob Zieff, except where is indicated

Special thanks to Robert L. Zieff

All of my music that Chet recorded were arrangements, i.e., parts were written for each instrument; they were not from what are called lead sheets—partly because my parts have to be laid out in a certain way and can’t just be this chord to that chord because my notes and voicings are not what most people use all of the time but my own configurations!”
“There was a lot of music of mine that he played on gigs but lost all of it over time for one reason or another.”

"I thought that I had heard of everyone on the jazz scene, but Fresh Sound Records really pulled one out of left field with these two albums. Don’t beat  yourself up for never hearing of composer/arranger Bob Zieff. He’s still alive, but his career in jazz was back in the 50s. Through circumstances described in the intriguing liner notes (some written by the still-alive Zieff himself) his compositions got the attention of Chet Baker, who recorded a bunch of them in various settings in the mid 50s in LA, NYC and Paris. This two disc set includes those cool-toned masterpieces, along with a hip big band lead by Supersax baritone saxist Jack Nimitz along with some artsy chamber jazz and a swinging violin quartet.

Zieff’s composition skills are quite impressive. Clever but never clinical, the pieces presented by violinist Dick Wetmore are bon mots of joy, as “Piece Caprice” and “Pomp” combine gypsy carefree with intellect and aplomb. Anthony Ortega’s Chamber Orchestra boasts artists such as Art Farmer/tp, Dick Hafer/bcl and Ahmed Abdul-Malik for some cerebral swinging on “Four to Four” and a rich “I Don’t Stand a Ghost of a Chance with You.”

Nimitz’s orchestra is also filled with big names such as Oscar Pettiford/b, Don Lamond/dr, Bill Harris/tb Kenny Burrell/g  and Chuck Wayne/g and the band sounds glorious as Nimitz fills the room on “Long Ago and Far Away” and the team swings with class on the driving “Softly, as in a Morning Sunrise” and a hip “Love Nest.”

The money maker h ere, though is Baker’s various bands, which included Dick Twardzik-Bobby Timmons/p, Jimmy Bond-Ross Savakas/b, Peter Littman/dr and some brass, reeds and strings .  Baker sounds inspired on”Mid-Forte” and the who team sizzles in Paris during “Rondette” and “Piece Caprice” whiel Baker’s duo with Bond on “Just Duo” is a sensuous delight. Baker’s chamber group is a bit heady, but works on ”A Minor Benign.” This set is a major find, and I guarantee you’ll be glad you have it.

Drummer Enrique Heredia brings the Baker era of Zieff’s compositions up to date on this recent release. His team of Fredrik Carlquist/ts-cl, Michele Faber/p and Curro Galvez/b swings through these clever charts and songs. Carlquist’s clarinet is warm and woody on the moody “Sad Walk, ” graceful on “Brash” and rich with just Galvez’s bass and hints of Heredia’s tomtoms on “ Just Duo.” With Carlquist on tenor, the team bounces with delight on “Rondette” and “Shiftful” with Heredia popping the clutch into overdrive on the snappy “Mid-Forte.” Music from 3 score years that is fresher than this morning’s baguette."