Home  /  Herb Pomeroy  /  Life is a Many Splendored Gig 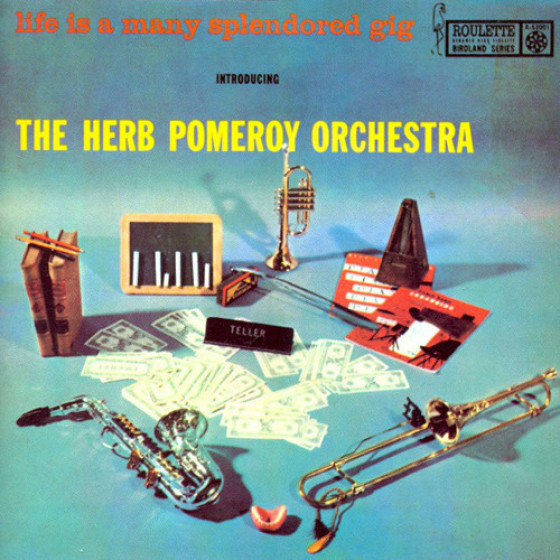 Life is a Many Splendored Gig

Originally issued as part of the Roulette Birdland Series SR52001

One of trumpeter Herb Pomeroy's very first recordings as a leader is this big-band session from 1957. It features a number of young musicians and jazz educators; the man who gained the most fame in the band is Jaki Byard, though he is heard exclusively on tenor sax instead of piano. The charts played by the band come from a variety of contributors, giving the band a diversity of sound without the bombast of Stan Kenton (Pomeroy's former employer). Among the highlights are Boots Mussilli's reworking of "Sweet Georgia Brown" (entitled "Jack Sprat") and Byard's sauntering "Aluminum Baby," with the latter piece focusing on section work and a brief bass solo by John Neves. Sadly, none of the brass or reed soloists are identified in the liner notes, and while some discographies claim that Zoot Sims is present on some tracks (it sounds a lot like his tenor sax in "It's Sandman"), he is not listed. Issued on LP in 1957 by Roulette and long out of print, it finally reappeared as a Fresh Sound CD over four decades after its initial release. Highly recommended.