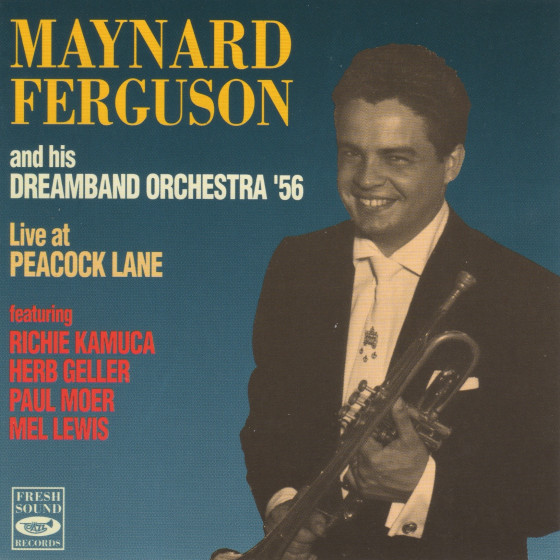 Ferguson's first significant orchestra was the "Dreamband" he had in 1956. This live set contains originals by Bill Holman, Al Cohn, Marty Paich, Manny Albam, Ernie Wilkins and Johnny Mandel; one would presume that the arrangements are also by the composers. The music generally jumps and is modern for the period. Such soloists as the leader/trumpeter, altoist Herb Geller and tenors Richie Kamuca and Nino Tempo are heard from and the rhythm section is driven by drummer Mel Lewis. Excellent music, it's also well-recorded.

"This album is a special treat for diehard Maynard Ferguson fans. Recorded in 1956, 'Live at Peacock Lane' is filled with some extremely hot performances by the legendary trumpeter and his orchestra. This recording features straight-up, hard-swinging big-band music. Aficionados will enjoy hearing the high-note trumpet skills of a young Ferguson (age 28 at the time) and the imaginative solos of trombonist Bob Burgess, alto saxophonist Herb Geller, and others. Burgess especially shines on the mid-tempo swing number "Dancing Nightly." Here, the trombonist mixes bebop licks with down-home blues riffs, and, midway through his solo, the band gets so excited that they start getting rowdy. The most impressive of these tracks is "More West," an insanely rapid tune that is about as fast as jazz can be played--only top-notch musicians can perform with this sort of speed. Not surprisingly, though, each section of this celebrated jazz orchestra holds its own here, and Ferguson takes a blazing solo to top it off. This is big-band music in its most virtuosic form."