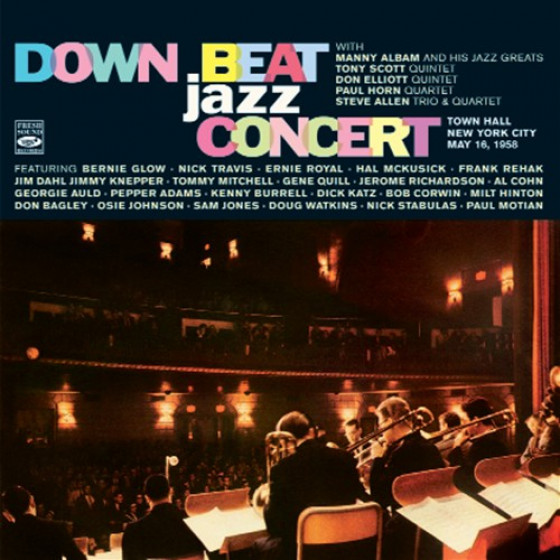 Where were you at 8:10 p.m. on May 16, 1958? If you were in New York, you should have been at Town Hall for the Down Beat Jazz Concert because that was the scene of the action that night. This concert turned out that way.

There was an air of expectancy as MC Jack Lazare introduced Manny Albams Jazz Greats, and the excitement didnt flag throughout the remainder of the concert. Within the framework of Albams arrangements some of the bands soloists as Al Cohn, Jerome Richardson, Gene Quill, Pepper Adams, Nick Travis, and Frank Rehak, got their way to say.

Tony Scott and his fine quintet popped in for a set. Don Elliott brought more instruments to the affair than anyone else, blending attractively with the mellow and ruminative bass clarinet of Hal McKusick. Flutist Paul Horn trekked East with bassist Don Bagley, and they teamed with pianist Katz and drummer Johnson for a set. Paul Horns East-West group offered.

And the picture of Steve Allen on onstage with Georgie Auld, Milt Hinton, and Osie Johnson is one worth remembering. All in all, it was a fine concert, and the two LPs released from this historic concert are now included in this CD set. There were many happy moments, many swinging highlights, and fond memories revived.