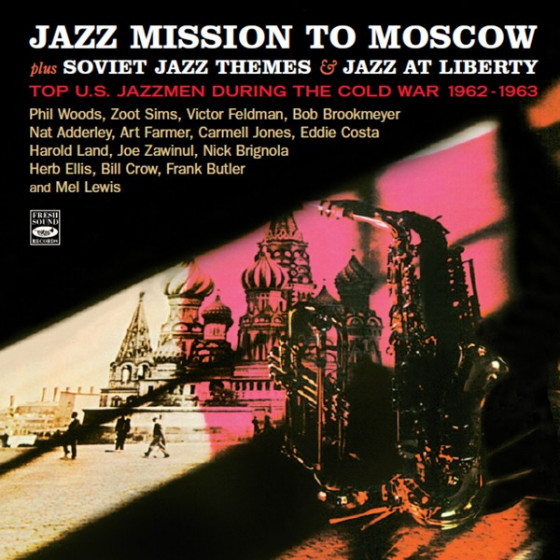 Jazz, once outlawed in the Soviet Union, finally got official approval when the Benny Goodman Band spent a rapturously received six-week tour there in mid-1962. Back stateside, eight from the band, including Zoot Sims and Phil Woods, with guests Eddie Costa and Marky Markowitz, commemorated the tour by recording Jazz Mission to Moscow, an ebulliently swinging album of jazz standards and Russian popular songs arranged by Al Cohn.

It was soon followed by one with an even more pronounced Russian flavour. Vic Feldman, vibist on the Goodman small combo numbers during the tour, had enhanced his knowledge of Russian musical activity and, back on the West Coast, recorded Soviet Jazz Themes, an album of jazz compositions by local composers. His choice of players was vindicated by the work of Carmell Jones, Nat Adderley, Harold Land, Joe Zawinul, Herb Ellis, Bob Whitlock, Frank Butler and Feldman himself.

In December 1962, however, the soviets slammed the door on jazz again. Responding, Radio Liberty launched a half-hour weekly programme of US modern jazz in June 1963, broadcasted through Europe from its base in the beach of Pals (Spain). This eries became a showcase for Soviet jazz composers when members of the Benny Goodman group recorded with other top musicians some jazz originals composed by their Soviet counterparts. Al Cohn was once again assigned to score the tunes, and Jazz at Liberty, featuring such luminaries as Art Farmer, Bob Brookmeyer, Phil Woods and Zoot Sims was the impressive result.

"Most of the music was written by Russian jazz composers Gennadi Goldstein, Konstantin Nosov and Andrej Towmosjan. Theyre very good, and on the (1) and (4) sessions their work has the benefit of being arranged by Al Cohn. It must have been satisfying indeed for the Russians, if they heard these recordings, to hear their works receive the Cohn treatment.

The (1) tracks give an impression of what Goodmans Russian tour could have sounded like if music like this had replaced the very tired Henderson charts. Markowitz, who wasnt on the Russian tour, is perhaps the big surprise here. He is in turn a delicate and then an explosive soloist. He worked with most of the good name bands over the years, but we never heard him solo like this in his other recordings. Eddie Costa connoisseurs will immediately be in thrall to the piano rumble that opens the first track, and throughout the soloists, notably Sims and Woods, play at or near their best. Zoot and Costa are good on Lets Dance and Mel Lewis pins the (1) tracks beautifully. Perhaps Frank Butler could have benefited from trying to emulate him.

The dense arranging of the Russian composers leaves plenty of blowing room for the fine soloists in the Feldman group. Their attractive themes have the feel of the gospel-soul popular at the time. The sessions are illuminated by fine horn solos and lovely work on piano and vibes from Feldman. Land is dominant and very much in the midst of the Coltrane fashion. The much-recorded Adderley and the under-recorded Carmell Jones, both more significant and gifted jazz figures than they were given credit for, are both on good form. Early Zawinul or effective Herb Ellis grace the two sessions.

Radio Liberty, still active, seems to be an American (I cant be certain) propaganda broadcaster. The Crow-Woods tracks were recorded for broadcast and the musicians played without fee. Again the music is excellent - the list of the horns speaks for the high quality. Brookmeyer hadnt quite achieved his ultimate style, but was getting close. The final track, pretty irrelevant to Westerners, has brief English from Phil Woods, a bit of alto and some impenetrable Russian."