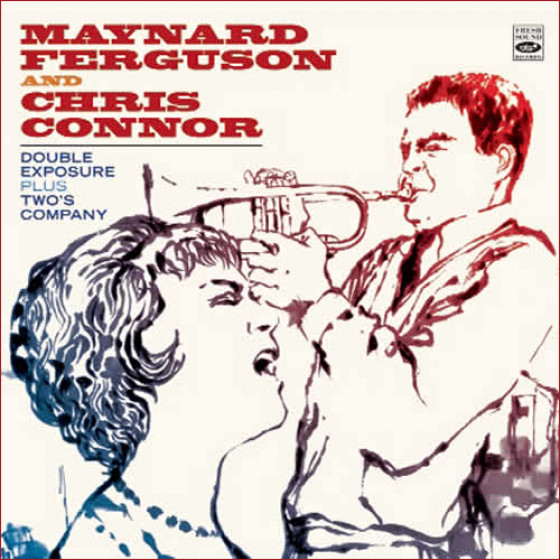 Thanks to an arrangement between their respective labels, Atlantic and Roulette, Chris Connor was reunited with Maynard Ferguson in a NYC recording studio for a series of dates with his orchestra in late 1960 and early 1961. These sessions produced two excellent albums, one for each record company: Double Exposure on Atlantic, and Twos Company on Roulette.

Throughout both Miss Connor is in good voice, singing in her signature almost vibratoless style, as warm on ballads as she is superbly relaxed at up tempos. The arrangements, all by Don Sebesky except for two by Willie Maiden, place the main focus on the singer, but behind her the band, driven by drummer Rufus Jones, is in fine fettle, exuberant and swinging, crisp, tight and together. Fergusons ebullient, stratospheric playing is liberally featured, along with the full low register forays that were part of his phenomenal range, making an effective contrast to Miss Connors understated, almost ironic approach.

"Singer Chris Connor and trumpeter Maynard Ferguson first met up as members of Stan Kenton's Orchestra in 1953. This CD reissue is a rather strange record because Connor performs very dramatic material that often sounds as if it were lifted directly from Broadway shows. Ferguson gets to throw in some high-register blasts now and then. The singer does her best, her voice was in prime form around this time [...]"

"Singer Chris Connor was nearing the end of her Atlantic years (which were really her prime) when she recorded this interesting, if not quite classic set with the Maynard Ferguson Orchestra, last reissued on a 1984 LP [...] Both Connor and Ferguson were Kenton alumni, and there are moments where the orchestra reminds one of that band, but the focus is mostly on the singer. She is in particularly fine form on "I Only Have Eyes for You," "It Never Entered My Mind," "Spring Can Really Hang You Up the Most" and "The Lonesome Road"."

Both by Scot Yanow (All Music Guide)