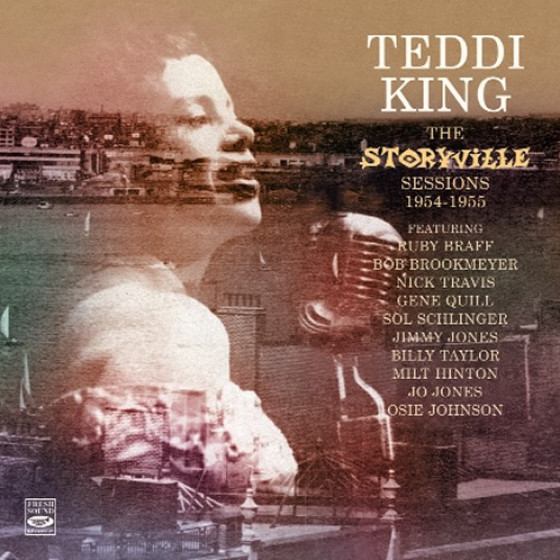 Possibly because of the sheer perfection of her vocal technique, Teddi King (1929-1977) may not have immediately seemed to some to be a jazz singer. But, in a career that included work with such piano luminaries as Nat Pierce, George Shearing and Dave McKenna, she won herself a small but discerning following as one of the best.

Influenced by such outstanding jazz singers as Billie Holiday, Sarah Vaughan and Ella Fitzgerald, whom she did not resemble vocally, and Lee Wiley, Mabel Mercer and Mildred Bailey, whom perhaps to a slight degree she did, she was blessed with near-perfect intonation, impeccable phrasing and a voice of crystalline beauty and freshness. All this is evident on these early Storyville sessions, where she is backed by front-line jazz talent in Ruby Braff, Nick Travis, Bob Brookmeyer, Gene Quill, pianists Jimmy Jones and Billy Taylor and sterling drummers Jo Jones and Osie Johnson. In these intimate, subtly calibrated sessions she sings with a warmth and delicacy no less forceful for being presented with elegance, sophistication and a complete absence of superfluous gesture or vocal sleightof-hand.

It should surprise nobody that she held Sinatra as the epitome of what a popular singer should be and he, with his frank jazz awareness, was as close to perfection in terms of phrasing as any singer could aspire to.

"This album captures a dark, maudlin edge absent from King's later LPs--its late-night ambience perfectly complements her lyrical, contemplative vocals, adding new layers of intimacy to this most honest of singers. Backed by an exemplary supporting unit including trumpeter Ruby Braff, pianist Jimmy Jones, bassist Milt Hinton, and drummer Jo Jones, King fully inhabits material like "It's the Talk of the Town" and "Love Is a Now and Then Thing," summoning new and deeply personal meaning from their familiar messages."

"The subtlety and intimacy of the signature Storyville label sound perfectly complement what critic Whitney Balliett once dubbed Teddi King's "peaceful, spacious way of phrasing," and Now in Vogue captures in full the singer's Zen-like serenity, showcasing her uncommonly lyrical phrasing and deep affinity for melody. Recorded with a stellar septet including trombonist Bob Brookmeyer, trumpeter Nick Travis and pianist Billy Taylor, the session boasts a deceptive simplicity that underscores the sheer grace of all its participants. King's contralto is both the focal point and just another instrument in the mix, fusing with the music so seamlessly that it seems as if she's been singing these songs and playing with this band her entire life."

Both written by Jason Ankeny -All Music Guide