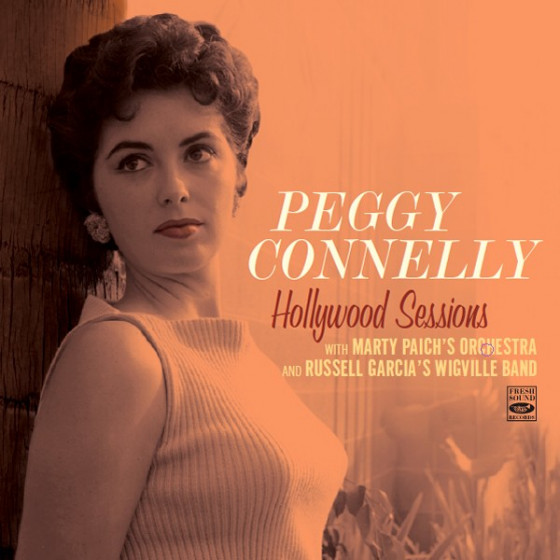 By the time she was 15, Peggy Connelly (1931-2007) had a lovely voice that won her jobs singing with competitive big bands in her hometown of Fort Worth, Texas. At 18, she went in search of work as a model and singer, and after a difficult start, she moved to Hollywood. Once there, she landed two significant opportunities.

The first involved her appearance in motion pictures and TV shows. The second and more important opportunity was the start of her career as a single recording artist. When she sang, Connelly put to good use her beautiful, round tone and commendable lack of artifice to project the intent of any song with lucidity.

She was Frank Sinatra’s girlfriend for over two years, and their relationship opened many doors for her with musicians and the Hollywood studios. Even though Connelly had few significant opportunities in her career to show off her talent as a singer, the times she did resulted in these magnificent recordings. Sinatra, not very fond of praising his colleagues, had no qualms about praising Connelly. When he first heard her sing Ev’ry Time We Say Goodbye, he said: “Hi, beautiful lady, you are wonderful.”

Peggy Connelly, sings in all tracks

"It’s simply staggering how many excellent female vocalists were kept under the radar during the 1950s. Peggy Connelly is a perfect example, as this reissue by Fresh Sound Records demonstrates. Her relationship with Frank Sinatra got her foot in the recording door, but her talents got her the sessions, as she sounds like a muscular June Christy. The informative liner notes chronicle her career, but the music speaks for itself, and the two sessions are  extremely strong. A four song 1954 date with a Jimmy Rowles/p trio and string quartet delivers wondrously moody reads of “Trouble is a Man” and a take of Bobby Troup’s “Where Did the Gentlemen Go?”. In front of Russell Garcia’s Band with pete & Conte Condoli/tp, Charlie Mariano/as, Bill Holman/ts, Jimmy Giuffre/bs, among others, she oozes over “What Is There To Say?” and is wonderfully shadowy for “Alone Together” with an almost soto-voce. She shows she can swing it as on “That Old Black Magic” with some nice rhythm provided by Jack Costanzo’s bongos and Willy Gallardo’s timbales, while cooing out “It Never Entered My Mind.” If you’re a fan of the O’Day-Christy-Connor side of singing, this gal’s for you."