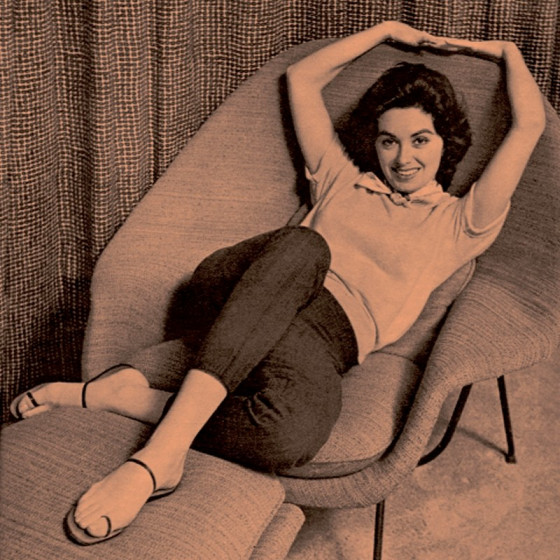 Peggy Lou Connelly was born September 25, 1931 in Shreveport, Louisiana, but she grew up in Fort Worth, Texas. By the time she was 15, she had a lovely voice that won her jobs singing with competitive big bands in her hometown—including Harvey Anderson’s orchestra. She also tried the beauty contest route (Miss Texas Beauty, Miss Palomino, etc.). She won the first Fort Worth Press-Majestic Theater Talent Tournament in September 1947, and graduated from Polytechnic High School in 1949.

When she was 18, she went in search of work as a model and singer, work that she combined with being the secretary of Ted Steele, an American band leader and host of several radio and television programs in New York. However, there were sad days when the bands were bad and the food was worse, and her own determination to succeed was the factor that guided her towards her goal. In the end it was singing,...

Peggy Lou Connelly was born September 25, 1931 in Shreveport, Louisiana, but she grew up in Fort Worth, Texas. By the time she was 15, she had a lovely voice that won her jobs singing with competitive big bands in her hometown—including Harvey Anderson’s orchestra. She also tried the beauty contest route (Miss Texas Beauty, Miss Palomino, etc.). She won the first Fort Worth Press-Majestic Theater Talent Tournament in September 1947, and graduated from Polytechnic High School in 1949.

When she was 18, she went in search of work as a model and singer, work that she combined with being the secretary of Ted Steele, an American band leader and host of several radio and television programs in New York. However, there were sad days when the bands were bad and the food was worse, and her own determination to succeed was the factor that guided her towards her goal. In the end it was singing, which became Peggy’s ticket to fame. She moved to Hollywood, where she found the going somewhat easier in securing her kind of work. Band jobs with Jerry Gray, Maynard Ferguson and Dave Pell became part of her background, and subsequently she invaded West Coast TV where she was a featured performer on many of the most important shows.

She was a comely young Texan lass who had set her sights on stardom and had already taken two giant steps in that direction. The first was in motion pictures, that all-too-elusive medium of show business which is notorious for its heart-breaking lack of opportunity. Peggy was assigned to the cast of the Universal-International film, “The Girl on the Red Velvet Swing” (1955), and, although not under contract to any studio, expected to be similarly employed in several productions scheduled by the industry. The second, and to her the more important step, would jumpstart her career as a singer.

In November 1954 she signed with Hollywood’s Nocturne Records. The jazz record label had started the year before, and was in a critical economic situation. “In desperate circumstances in the music business, finding a Hit record has been the classic way of getting out of the red, and that means it has to be a vocal record. And it’s even more likely to succeed if it’s by a gorgeous gal who can sing, together with some sure-fire hit tunes. Peggy Connelly was found and she certainly was lovely, with a voice to match,” reasoned Harry Babasin, Nocturne’s founder.

In the evening of December 15, at Western Recorders Studio, 6000 Sunset Boulevard, with engineer John Neal on the board, the new singing discovery recorded four tunes, an old Joe Mirow hit, a Joe Pasternack M-G-M theme, and a couple of new songs, one by Victor Young, I Have Said Goodbye to Spring, and Bobby Troup’s Where Did the Gentleman Go? Marty Paich did the arrangements and conducted the orchestra including a rhythm section made up of Jimmy Rowles on piano, Harry Babasin on bass, and Roy Harte on drums, plus Stella Castellucci on harp, and Edgar Lustgarten, Kurt Reher, Nat Shapiro, and Karl Gottlieb on cellos, providing a lush string setting for Peggy’s talented vocalizing. The album did much to put the Nocturne label on the jazz map. Unfortunately, “the expenditure for the project left Nocturne in serious financial difficulties, and a solution was sought, and found. But it meant that the label never ever again returned to active sales and distribution—in other words—the end,” concluded Babasin. The recording session remained unissued until 1989, when Fresh Sound Records bought the masters and released them on LP.

Shortly after this frustrating first experience, Red Clyde, who was the West Coast chief producer for Bethlehem, offered Peggy an opportunity to record an album for the label, which she agreed to. In addition to choosing her own tunes for the date, Peggy found herself in the musically astute company of Russell Garcia. When the arrangements were commissioned, Russ reassembled the ‘Wigville’ band with an eye to blending its distinctive sound with that of Peggy’s. As usual, Garcia conducted the orchestra throughout the proceedings, and his deft touch and musical finesse are quickly evident to the aware listener. Peggy put her fluid voice to good use, with appropriate intonation and sensitive phrasing, both subtle and suggestive.

Her choice of tunes gives us an interesting peek into her musical personality. The taste reflected in this program supports the contention that good music, properly presented, has a lasting appeal that fly-by-night gimmicks can never attain.

Peggy Connelly proved to be a good, round-voiced, straight singer with a commendable lack of artifice. Her taste was quite middle-of-the-road, and she could project with lucidity the intent of a song. She also had a knowing way with lyrics, a subtly beguiling overall style, and a delightful disrespect for gimmicks.

She became the talk of the city after she started a relationship with Frank Sinatra. They had met in March 1955, and grown closer over time. The singer was fond of her and of her voice, and it didn’t hurt that she resembled Ava Gardner, whom he had married in 1951 and divorced in 1957. For over two years, Peggy was Sinatra’s girlfriend, and she accompanied him to numerous public acts such as at the 1956 Academy Awards, that took place on March 21, where Sinatra was nominated Best Actor for his performance in “The Man with the Golden Arm.”

Shortly later—on April 17—Sinatra flew to Spain to film “The Pride and the Passion,” and took Peggy with him. He had all the intention of ignoring Ava, his former lover who was living in Madrid at the time. But after two days of being in Spain, Ava called him. They argued, they shouted at each other, they aggravated each other’s grievances. Peggy arrived and heard only the end of the conversation. -Did you talk to Ava? -Yes. -I don’t know if I like that you’re talking to her while we’re here. -Good. Then go.

Without hesitation, she packed her luggage and returned to Los Angeles. By July 28 the filming was over, and so Sinatra took a flight home. His house was still a shrine to Ava, photographs of her were everywhere, but for a couple of years, he appeared to be serious about Peggy, but she eventually left Frank for good in 1957. Meanwhile, Peggy had won enough admiration (at Top’s, a cafe in San Diego) to take her to the Blue Angel in New York, and to Mister Kelly’s in Chicago in October 1956, where she established her reputation as a singer of unusual talent. In 1957, her skills as a singer earned her a movie contract with Paramount—they hired her to sing in movies, even though she only appeared in brief roles on two pictures —“Houseboat,” and “The Matchmaker.”

She then married Dick Martin, the wacky half of the popular comedy team of “Rowan and Martin,” that played in nightclubs across the United States and overseas. They had a son together, Cary, but their marriage only lasted until 1965.

In November 1958, Peggy was Saga Magazine Girl of the Month. A few months later she started working with comedian, actor, and writer Ernie Kovacs. He had seen her act in the Blue Angel two years prior, he said he “liked the cut of her jib” and asked her to work with him as a comedienne. It took Peggy a while to come over to accept his offer, but she finally did, becoming a great success as a comedian on Kovacs’ TV show “Take a Good Look” in his 1959-1960 season. The results, from everyone’s point of view except Peggy’s, were fine. In fact, the only thing at which she wasn’t a really big success—if we are to believe her—is at being what she really yearned to be, a singer. Peggy explained: “I’m so frustrated about it I’m dying inside. My husband and his partner made an album. In fact, everybody gets to make albums—except me.”

So in 1962, after a couple of years devoting most of her time to her family, she returned to the stage to sing again. “I used to struggle to be an actress. Now I get all kind of professional offers. But I want to be a singer. Oh well.” Her return was different this time, she did not show up alone, but as a member of The New Christy Minstrels, a vigorous folk chorus focused on the performance and perpetuation of the great American tradition of balladry. The group was comprised of two girls and eight men (including leader and founder Randy Sparks). Peggy, together with Jackie Miller, were the female voices of the chorus. She recorded two albums with the group in 1962: “Presenting” and “In Person.”

During 1970-1971 she appeared singing on the NBC TV series “Words and Music” as herself. She then moved to Europe in 1972, where she settled for several years in Germany appearing on TV, and recording as a single act until the mid-1990s, when she, Sarah Tullamore and Wendy Taylor formed a trio called The Jazzberries. The trio played extensively in Paris and throughout Europe until they disbanded in 2000. She then returned to her hometown, where she passed away on June 11, 2007.