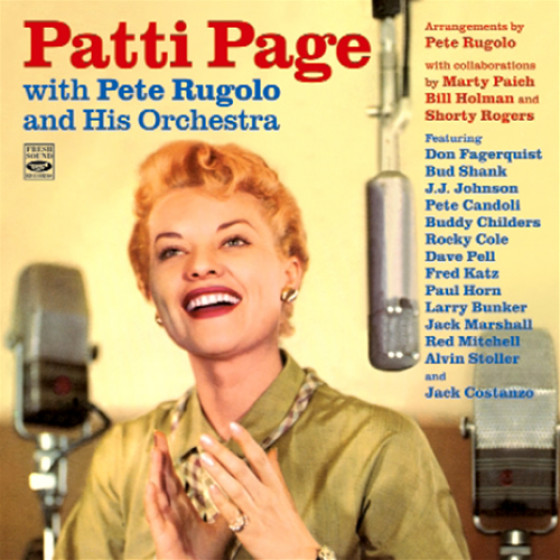 In 1956, Patti Page, just 30, was at the top of her fame. She had already collected nine gold records for million-selling popular singles, and she was the star of the The Big Record, one of the very few straight musical TV shows on the air.

With these recordings with Pete Rugolo she made a radical departure into jazz singing. Rugolo was one of the most skilled and adventurous arrangers of modern sounds in jazz, well known for his long and remarkable association with Stan Kentons progressive band. He assembled two different settings for these sessions. On most sides he used a large orchestra, studded with such soloists as Bob Cooper, Bud Shank, Georgie Auld, and Pete Candoli. On others he worked with smaller groups, replete with some fine solos by Don Fagerquist, Paul Horn, Larry Bunker or Fred Katz. Throughout, Rugolo provided the perfect colorful, vivid orchestrations that make these Patti Page performances among the most outstanding of her career.

Producer's Note: On this CD set, the successful "In the Land of Hi-Fi" album has been intentionally coupled with "West Side", another great Patti Page/Pete Rugolo album, because both of them were recorded in Hollywood, and featured most of the West Coast studio jazzmen associated with Rugolo. A third Page and Rugolo album titled "East Side" (Mercury SR-60114), was also recorded at about the same time in New York, but with an orchestra including East Coast musicians.

-In the Land Of Hi-Fi

"A better title for this album might have been Patti Page Tries to Pull a Sinatra, as she delves into swinging jazz, seemingly far removed from "Doggie in the Window" and much of her other pop material from this period. The original notes on In the Land of Hi-Fi tell the reader that Patti Page "has never been too far removed from jazz." That's not in dispute, since she came of age in a time - the big-band era - when the influence of jazz was at its peak. But she is fundamentally a pop singer, regardless of her influences or the rhythmic qualities of her phrasing. Page's persona as a singer is more dramatic than anything else, and even in those moments when she lightens up (as on some verses of "A Foggy Day"), she's still giving more of an emotional, almost theatrical performance than a musical performance. Some of the rest, including "Mountain Greenery," "My Kind of Love," and "I Didn't Know About You" work better, all more comfortable fits among singer, band, and song, but there's still not enough to make this record more than an offbeat curio in Page's career. For this album, she was joined by Pete Rugolo & His Orchestra, who sometimes seem rather ham-fisted, trying to punch home jazz and swing elements. Buddy Childers' trumpet on "Mountain Greenery" and the alto sax heard on "I've Got My Eyes on You" are enjoyable enough, and the band is sometimes more diverting than Page. On other occasions, as on "Love for Sale," the band is so busy behind Page's surprisingly tender and edgy singing that it's almost a distraction."