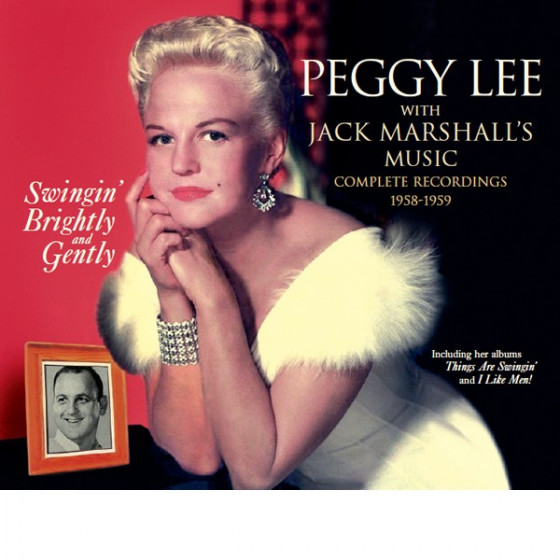 FOR THE FIRST TIME THE COMPLETE DISCOGRAPHY, DATES AND PERSONNEL OF ALL THE PEGGY LEE & JACK MARSHALL RECORDING SESSIONS

In 1957, Peggy Lee returned to Capitol, the label that she considered her alma mater. By then she was a mature artist with a fully developed, insinuatingly attractive and individual style. The vocalist had spent eight years (1944-1951) at Capitol Records, and after a time with Decca, would go on to spend fifteen more at Capitol (1957-1972). One of her favorite arrangers and conductors on this second stint was Jack Marshall, who was co-responsible of Peggy’s biggest hit, Fever.

In 1958 and 1959, she asked Marshall to write for groups of different styles—some had strings and deftly used trombones, others were swinging or Latin flavored small groups. Their collaboration —aside from the top-selling “Latin a la Lee!,” not included in this set— resulted in two of Peggy’s best albums, “Things Are Swingin’” and “I Like Men!,” as well as all the single tracks arranged by Jack Marshall during this period. She swung rhythm tunes in her inimitable manner, emphasizing in the right places and coming up with a surprising turn or two where least expected.

She sings about her men, too, with a mix of simplicity and seductiveness, and belts out the blues, earthy and down home in feeling, sustaining a mood as effectively as she does on the ballads. They are clever, nicely crafted scores, and Peggy Lee is in fine voice and spirit, employing her full range, vocally and emotionally, and her flirtatious sense humor.

"Miss Peggy Lee is always guaranteed to stump listeners on Blindfold Tests. Depending on the record, people mistake her for a young Billie Holiday, but never a white singer, as she’s got a delivery that was years ahead of most Anglo canaries. This album has her complete recordings of 1958-59 with Jack Marshall’s arrangements and orchestra, and if you’re going to get only one Peggy Lee album, this is the place to start, as it has all of her swinging strengths.

Marshalls band included some of the greats of jazz, including here Benny Carter, Shelly Manne, Pete Condoli, Jack Sheldon, Milt Bernhart, Howard Roberts and Frank Rosolino. The band and Ms. Lee show their versatility as they delivery some toe tapping Basie sounds on exciting tunes “Things Are Swingin’,” “Alright, OK, You Win” and “Riding High” as the reeds go wild. There’s a twinkle in her eye as she coos on”I’m Beginning to See The Light” and goes chicka-boom on a fun “Oh Johnny, Oh Johnny Oh.”

Some nice country guitar blues has Lee rollicking on “You Don’t Know (How Much I Love You” and delivers hip R&B, and she puts the “purr” in percussion during “Good For Nothin’ Joe.” She can get sensuou8s with a come hither lyric on “Alone Together” while carrying a late night torch with strings on “Bill.” She is like a vocal version of Lester Young; light and airy and just so deliciously slightly behind the beat, as she holds back just the right amount on the frenetic “I’m Just Wild About harry” and even the classic “Fever” works in this setting, with the stark accompaniment feeling like a dark negligee, fitting perfectly loose on Lee. This album is a vocal essential, making all modern day chanteuses pale in comparison. WHEW!"