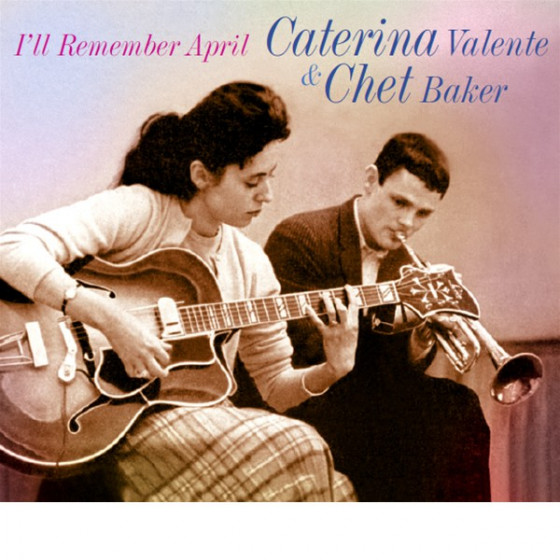 Combined here is the remarkable voice and singing style of Caterina Valente and the lyrical and intimate trumpet of Chet Baker, in a collection of swinging and romantic performances recorded in Germany during the 50s.

Caterina Valente was a singer who belonged among musicians, and she was enough of a musician herself to understand the nuances of harmonic changes that played a large role in jazz. She played guitar, worked with jazz combos, and liked to indulge occasionally in a spot of vocalese, three aspects of her talent that made her the most popular girl singer in Europe.

Chet Baker was the new American trumpet sensation when he visited Germany for the first time in September 1955 with his quartet. A month later, Valente joined his quartet for a concert in Stuttgart, and their musical feeling generated quite a stir among German jazz fans. They even were offered to make a film together, which unfortunately never happened. The only documented meeting of both artists was resumed on a recording session in March 1956, when they joined-in for two lovely and rewarding duet songsIll Remember April and Every Time We Say Goodbyethat came out on a single on the German Brunswick label, both included in this set.

The other exciting performances here display Caterina Valente in her widest, most colorful range. Her performances, and most of those featuring Chet Baker, are further distinguished by the masterful accompaniment of Kurt Edelhagen and his orchestra and, in the case of Chet Baker, also by the studio orchestra of Rolf-Hans Müller.

The music, both emotionally and melodically interesting, is well served by all concerned.

"Heres a part of jazz history you may not be familiar with. Just as he was beginning to be the new big thing in jazz, trumpeter Chet Baker went to Germany in September 1955 with his quartet. There, he recorded some very intriguing and unique sessions with Italian vocalist Caterina Valente, who recorded much of her music there. What you have on this single disc is a mix and match of the two artists. Most interesting is the cozy and intimate duets between Caterina with her guitar and Baker blowing obligattos on Ill Remember April and Every Time We Say Goodbye. The rapport between these two is delightful. After that, you have a series of Valente singing with Kurt Edelhagens Orchestra, a band that has a swinging punch. She comes across like a gutsy Chris Connor on I Get A Kick Out Of You and All Of Me, while Chets cool horn melds well with the big band on Baker 56 and Isnt It Romantic. The disc closes with Valente with only a piano on You Better Go Now, confirming the adage that less is more. Baker collectors will want this one."