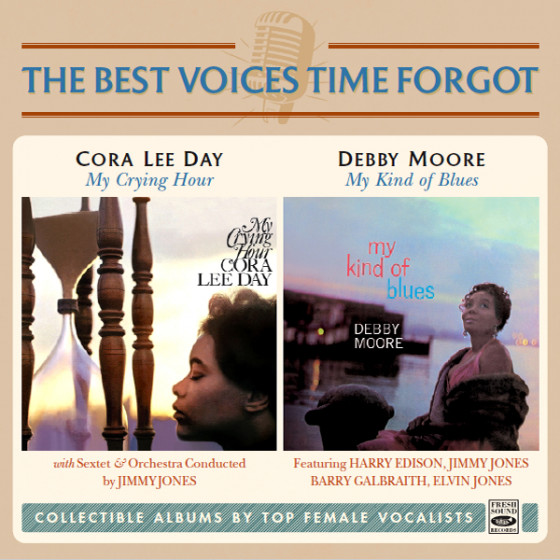 My Crying Hour
Cora Lee Day (1914-1996) was virtually unknown when she recorded 'My Crying Hour' in 1960, the only album in her brief singing career, before becoming an actress. She bore a striking vocal resemblance to another legendary “Day,” the immortal “Lady Day” —Billie Holiday— but her voice still has that certain intangible quality that singles her out as a rare-find on the jazz scene and is sure to catch your ear. Under the direction of pianist Jimmy Jones and with a number of skillful arrangements, Cora Lee gained the drive and confidence to sing an engaging repertoire of fragile, moving songs in the manner that came most natural to her —soft and intimate.

My Kind of Blues
Debby Moore (1925-2017), who once sang with Earl Hines, was a Fifties pop singer whose light, warmly caressing voice and ability to read a lyric and phrase well showed a frank jazz awareness. It’s no surprise, then, that she was able to get a quintet of this quality for this mix of blues and standards. Although the group is cast in a mainly accompanying role, it could call on Harry Sweets Edison’s swinging solos and delightful backing for the singer —who also contributes the novelty of whistling on a couple of tracks in a style not unlike the trumpeter’s— as well as Jimmy Jones’s elegant soloing and Barry Galbraith’s funky guitar. The result was 'My Kind of Blues,' a consistenly interesting debut album, with the singer generating her lithe, detached swing and getting her own groove going.

Personnel on “My Crying Hour”:

Personnel on “My Kind of Blues”:

"Both of these albums are rare finds by the intrepid Jordi Pujol of Fresh Sound for his Best Voices Time Forgot series and are an interesting contrast between the two singers. Cora Lee Day, later better known as a TV and film actress, notably in Julie Dash’s 1991 film Daughters Of The Dust, recorded the album My Crying Hour in 1960 and immediately the resemblance to Billie Holiday is apparent, in both intonation and inflection.

She is not merely a copyist though, and the quality of her vocals shines through, her style largely avoiding the fragility often associated with Holiday whilst retaining the element of slightly behind-the-beat phrasing. Some of the tracks have an orchestral backing and whilst Jerry Valentine’s lush swinging arrangements are first rate, it’s the sextet sides that capture the attention, in terms of delivery and complementing the singer’s interpretation of the material. The smooth, mellow warmth of Illinois Jacquet’s tenor, the close shadowing of vocal lines by guitarist Barry Galbraith, and the economic and tightly muted accompaniment of Harry Edison all add to the flavour of the album. The support is particularly fine on When Your Lover Has Gone, The Very Thought of You, Try A Little Tenderness and the heartfelt Trouble Is A Man, a cover of the 1946 Peggy Lee number.

Emmaline Maultsby’s stage name, Debby Moore, was apparently given her by Louis Armstrong and she had some success in clubs singing with Earl Hines and Count Basie. More of a “popular” vocalist than Cora Lee Day, she has a bluesy, sometimes raunchy style, with distinct, inventive vocal interjections, asides and accents, often adding a hint of sensuality, and even drops the occasional whistling passage in. Harry Edison is the only horn, soloing on each, a lesson for any trumpet student in how to effectively use a mute. Unassertive and understated, he manages to maintain a closely aware presence and an eloquent interplay with the vocals.

Ms Moore’s material is an attractive mix of blues and standards, which she handles with assurance, including a number of her own compositions, of which Nothin’ But Trouble On My Mind stands out, with Edison’s sharp trumpet and with a clarity of tone and pitch in the singer’s brief whistling interlude. The final track, I Get a Feeling, is added to the original album, a single for Top Rank with accompanying unknown male."

"Just when you think there are no more ladies at the jazz microphone, Barcelona-based Fresh Sound Records does some fracking and comes up with more black gold!

Cora Lee Day only recorded this one album before becoming an actress, ranging in TV shows like Hunter or in films such as What’s Love Got To Do With It. As a vocalist, she has a bit of a mix of Eartha Kitt and hints of Billie Holiday, teaming herself on this 1960 session with a sextet and orchestra conducted by pianist Jimmy Jones. The Basie alumni Harry Edison/tp, Illinois Jacquet/ts and Osie Johnson/dr give R&B is support, with Day slinking with the horns on “When Your Lover Has Gone”. She oozes through Jacquet’s fog on a rich “Try a Little Tenderness” and slithers on “Ain't No Use” with a stark take of “This Masquerade is Over” with sublime work by Jones. A ringer!

Debbie Moore is almost as obscure; she did sing a bit for Earl Hines, but this 1959 album with the disparate team of guitarist Barry Galbraith, swinging trumpeter Harry Edison, classy pianist Jimmy Jones and steady bassist George Duvivier also includes drummer Elvin Jones, and he’s in a bluesy mood along with the sassy Moore on this wide range of blues. Moore sings with verve and even whistles with nifty understatement by Duvivier and Jones on the cooing “I Get A Feeling” and sassy “Come Home With Me”, with Sweets cheering her on. She oos and aahs through “Hallelujah I Love Him So” and agonizes a wisp on “Why Don’t You Do Right”? A hip Basie pulse gets her in a good mood on “Sent For You Yesterday” and “(I Know) My Baby Loves Me” and gets a gospel preaching feel on “Nothin’ But Trouble On My Mind”. Get this lady a room!"