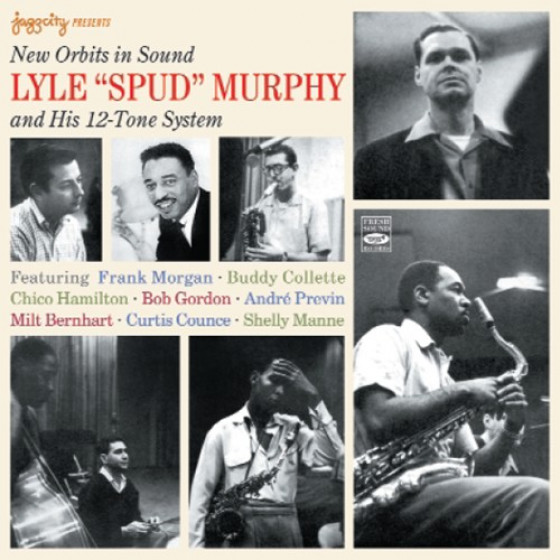 Lyle 'Spud' Murphy (1908-2005) the veteran arranger of the swing era began attracting attention in 1955 with his self-devised 12-tone scale system of composition and arranging. It was something completely different - an organized sound in a fresh and new harmonic concept.

To achieve this result Murphy used the unique instrumentation of soprano, alto, tenor and baritone saxophones giving the full tonal range to the section captured in his first 10 record for the Gene Norman Presents label. The musicianship of the performers is first rate. In addition to the superb section work, which features Benny Carter, the solos played by Buddy Collette and Bob Gordon are outstanding, and especially striking is Frank Morgan, who emerged here as one of the most exciting West Coast altoists.

The second record on which Murphy applied his musical system, was produced Lester Koenig's Contemporary, on which five woodwinds play collectively with a rhythm section made up by Andre Previn and Shelly Manne, in a horizontal, or contrapuntal, design. On the last four selections, two trombones were added to the first instrumentation for additional tonal effect. The execution of the orchestral parts is flawless and the imagination and technique displayed by the soloists a still-exciting experience.

Note: Although Benny Carter was not credited in the original 10" album, he also participated in the first two sessions. The high musicianship demanded to play Lyle Murphy's scores was th reason Benny, a great and experienced reader, was picked up to play the alto parts in the section work, while a young Frank Morgan took care of the soloing

"Lyle 'Spud' Murphy, who lived to be 97, was also an influential teacher in addition to being an innovative arranger. He devised a 12-tone scale system that he taught to many musicians through the years. Murphy led relatively few albums through the years with New Orbits In Sound (FSRCD 2254) reissuing his most important work. Recorded during 1954-1957, the music features a couple of different saxophone sections with a rhythm section and two trombones added on the last few tracks. The voicings of the saxes sound different and fresh without the music losing its swing. Frank Morgan is heard as the key soloist on the first session of this intriguing and rewarding package."